Good midday everyone, this is your May 2012 outlook. Let's start out by observing what has happened in the atmosphere over the past 30 days.

Over the past 30 days, mean heights have indicated the presence of a ridge of high pressure over much of the country, meaning warm temperatures for that area. This is due in part to the below normal anomalies just below Alaska.
The reason this is being looked at is because weather tends to be fairly straightforward from one month to the next (in some cases), and we can use this to or advantage and forecast the next month by observing the past month.

In the past month, we have had spells of warm weather, which have been interrupted more frequently by cooler periods of weather, especially in the past couple weeks. Some talk has been swirling around the weather world that this is the long awaited pattern change. However, since I don't have the proper observation tools to see for myself (or the willpower to see if snow will be falling in May), I do not want to comment on that right now.

Here is an analysis of 30 days of observed temperatures, ending at April 26. As you can see, much of the eastern US was slightly above normal, whereas the Plains and eastern Rockies were much above normal. The West Coast was indeed cooler than normal. I find that this is likely to be a good indicator for temperatures in the May forecast. These temperatures may have been significantly raised due to the massive heat wave experienced in March, so that possibility will be taken into account in the May outlook.

Recently, the storm track for the US has been centered around storms entering from the Southwest and shifting east into either the Southern Plains or central Plains. The Southern Plains storms were the big severe weather storms, while the central Plains storms also had some interesting events. The point I'm trying to make is that these same areas may get more severe weather in the future.

I will not be making forecasts for indices like the NAO, PNA, AO due to their day to day variability and common sense finding that concept of forecasting a day to day variable over a month to be on the lower part of the forecast accuracy spectrum.

I am expecting cooler temperatures in the far northern Plains as well as the West Coast based on past below average temperatures in those areas. More important involves where the traditional Tornado Alley will be. In the past, that area moves east with time, and I believe that I will follow history for this one and have indicated that the risk area will be shifting north and east. The entire eastern US should eventually average out to average or slightly above average temperatures, but I am not going to rule out the potential for a big heat wave that rings average temperatures well above normal.

Any questions can be posted below.
Andrew
By Andrew at 12:00 PM 8 comments: Links to this post

A 4-8 day outlook has been issued for severe weather, indicating that the area shaded has at least a 30% chance of experiencing severe weather within 25 miles of any point. This is valid for May 2. My area is included in this, so expect a low of posts concerning it, adding to the fact that it is the first big event in a little while.
Let's take a look at a few maps for the event. Here is the instability forecast for May 2. All maps are valid at 7:00 PM CDT May 2nd. 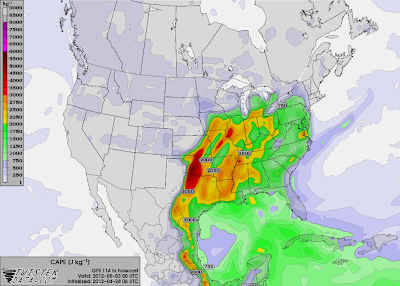 Here is the instability forecast. You can see very large amounts of instability located mainly in western Oklahoma, but also back towards the area outlined in the Midwest and eastern Plains. You can see where the warm front cuts off by seeing where the instability ends in southern Wisconsin. However, that may be where the highest tornado potential is, as frontal boundaries are known to have tornado-enhancing characteristics with them. 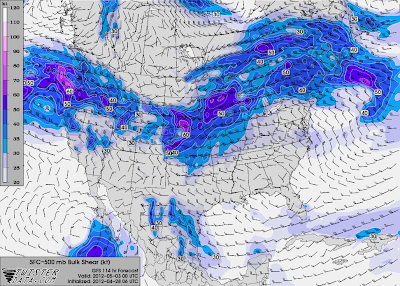 Here is the shearing forecast for 7:00 PM CDT. The highest shearing looks to be in Wisconsin, indicating that those areas would have better tornado potential. However, considering that the instability is located farther south, they do not exactly match up. We will have to see what evolves with this situation. 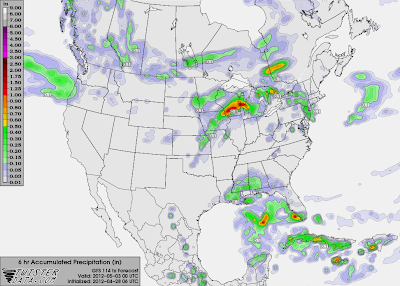 Finally, the precipitation forecast for 7:00 PM CDT indicates that a mesoscale convective system (MCS) of showers and thunderstorms will be ongoing across southern Wisconsin. Some single celled storms could evolve to the south of this MCS, but that remains to be seen.