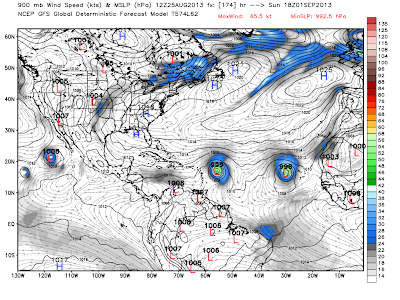 Tropical activity across the Atlantic basin is about to spike, with the GFS model predicting the development of two tropical cyclones in just over a week's time.

This spike in tropical cyclone development comes as a Madden-Julian Oscillation pulse creates a favorable tropical cyclone development environment for the Atlantic. Those more familiar with the MJO may recognize this as Phase 8 and 1. As the MJO pulse pushes over the Atlantic, it is expected tropical waves shifting west from Africa will have a favorable environment to develop. When they move out to sea, it appears probable that the northern Caribbean may be scraped by the first tropical cyclone, as the GFS forecast above shows. Beyond that, the dome of high pressure stretched across the Atlantic should erode to a point where both cyclones would be able to curve north and east, away from the US Mainland.

Beyond this first spike in activity, ridging in the north Atlantic should rebuild, and any tropical cyclones that develop in the next 14+ days after these two cyclones could move west enough to threaten the Gulf and western Caribbean. Of course, this is all speculation, but we are rapidly approaching peak hurricane season, and these spikes of tropical cyclone development are to be expected as we move through the rest of August, September and even into a bit of October.

Andrew
By Andrew at 2:56 PM No comments: Links to this post