There is a very eerie similarity we have discovered in today's new 0z GFS. We have been closely following a pattern called the LRC (Lezak Recurring Cycle). Here's the gist of it:

This year, a dominant feature was a strong trough of low pressure in the Ohio Valley. See the below example from October 19th.

We see a strong low pressure system in the Midwest into Ohio Valley. A ridge was present in the west, holding up the jet stream in that area. Now see the forecast from the freshly-printed 0z GFS for the final days of November.

Now, according to LRC 'guidelines', the pattern typically does not appear this soon after it happens. If this was to verify, the cycle would happen every 39 days. That would be an extremely short cycle. However, seeing as how this is a very similar forecast to what happened on the 19th, it is possible that this LRC will turn out that way. Let's not get ahead of ourselves- this forecast is for November 27th.
It is definitely something to watch, though.
By Andrew at 11:50 PM No comments: Links to this post

The past couple GFS model runs have shown a true nosedive in the Arctic Oscillation forecast going into the late November period. The thing about it is, since the GFS has been indicating a nosedive for more than 3 runs, we like to call that a 'trend'. More interesting is how this Arctic Oscillation nosedive occurs as today's 12z ECMWF predicts a massive trough to cross the Upper Midwest as indicated by the 500mb chart just above. This ECMWF model, should it verify, would likely give the Upper Midwest snow and possibly some intense thunderstorms in the south. It's hard to tell since this system is projected to be very strong. The strength of the storm only makes it more volatile.
Since the Arctic Oscillation is very closely related to the North Atlantic Oscillation, it is possible that the NAO may go negative if the AO does as well.
By Andrew at 11:40 PM No comments: Links to this post

The ECMWF is showing a massive trough of low pressure entering the Upper Midwest area, indicated by a minimum of heights. The GFS is also showing a similar idea, but not as substantial as this. It is very possible that, should this verify, areas may receive blizzard-like conditions in the hardest hit areas. However, since this is 10 days out, let's not get ahead of ourselves.

-PNA will, after a VERY VERY prolonged and VERY VERY strong negative spell, be turning possibly positive. Should this happen, it would be very good news for the winter weather lovers in the East. Signs of this occurring are present in the above ECMWF image, as a ridge sets up in the West with a trough in the East- a major signal of a +PNA.

-NAO will be variating between positive and negative in this time frame. At this point, forecasts indicate that the NAO may be heading into weak negative territory, which wouldn't be of much help to the US for this system.
By Andrew at 5:15 PM 5 comments: Links to this post

The La Nina today is still very much present and remains east-based. This means, in a situation only affected by the ENSO process (La Nina/El Nino), the East US would be cooler than normal. However, there are many more variables that affect temperatures and precipitation. At this point, as previously stated, the coldest anomalies are situated in the eastern portions of the ENSO monitoring areas.
Something recently discovered by our team is the Southern Oscillation Index (SOI). When the SOI is positive, it is indicative of a La Nina. When the SOI is in a negative phase, an El Nino is usually present. Last year, SOI values were as high as 27.1, showing a big presence of a La Nina. However, the October SOI values turned out at 7.3 units. While it is expected that the values will be lower as we are in a 'double dip' La Nina, these are very modest values that indicate this La Nina may not be as strong as originally thought. Unless the SOI goes to higher values soon, we may have to revise our winter forecast.

Note: We may have to revise portions of our winter forecast as per the new CPC outlooks and teleconnection information that is looking somewhat unfavorable for some people.
By Andrew at 8:53 AM No comments: Links to this post 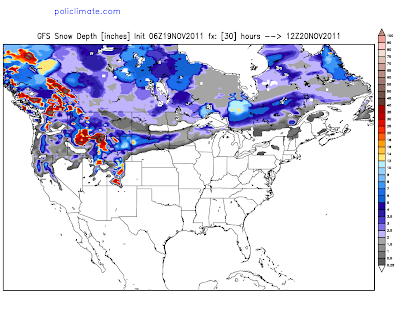 Above is the maximum amount of snowfall from this snowstorm. Wisconsin will get some lake effect snow, which may give over 3 inches to those regions. It does appear that extreme SW South Dakota is well in the running for over 10 inches, as Rapid City, SD has already broken their one day snowfall record for today.

The old record was smashed by 3.6 inches of snowfall over the previous record. This system will now begin to swiftly move off to the east. As it does, less snow will fall from the system as it becomes more starved for moisture.

By Andrew at 8:39 AM No comments: Links to this post