Why A More Active Storm Track This Winter?

The big thing I have to point out but haven't recently is that the storm track will be more active than last year this winter. Last year, if you recall, something in the headlines was the 'Greenland Block'. You can see what the Greenland Block is below. 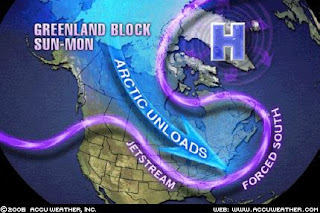 The Greenland Block has a high pressure system form over Greenland. This ridge (area) of high pressure remains over Greenland and pushes the jet stream south as cold air flows south into the US. This block really is a 'block'- in the sense that the Greenland Block creates a traffic jam in the atmosphere. When the jet buckles south, it creates two areas of low pressure- one over the East US, and the other in West Europe. Essentially, this pattern continues until the high pressure collapses. That's why there were not as many systems last year.
This year, however, the Greenland Block is not anticipated to be as prevalent as last year, therefore introducing the prospect for a more active storm track.
By Andrew at 8:48 PM No comments: 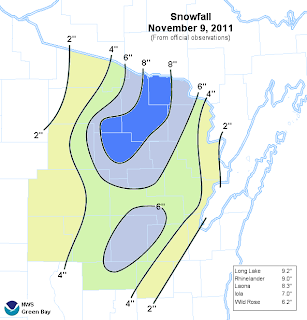 The totals are in from the November 8-10 snowstorm, the first one of the season for the Upper Midwest and Plains region. Observations indicate the hardest hit region was indeed Northeast Wisconsin, where some areas clocked in over 8 inches of snow. This snow was wet, which is to be expected with an early season snowstorm. Nonetheless, significant amounts of snow were laid down in Wisconsin and Iowa as seen in images above. It appears a band of heavy snow set up across the area outlined in blue as the system moved to the north into Canada. Here's some statistics:

-15,000 customers were without power at the height of the storm.
-The highest official observation was 9.2 inches in Long Lake.
By Andrew at 8:04 PM No comments:

This evening, we have several things ongoing across the country.
The first was the snow that was observed in Chicago today and various other regions as the cold air ushered in was cool enough to make the atmospheric levels sustainable for snow. That precipitation came on the backside of a storm system currently giving Canada a snowstorm. This system is the one that earlier had brought over 10 inches of snow to isolated areas in Wisconsin a couple days ago.
That system is connected via cold front to another system just offshore the New England region. That area of the country is currently receiving a batch of rain. Out west we have a stationary front and a weak piece of energy now exiting the Rockies, which undoubtedly tore this low to shreds. This system will likely make for some clouds and precipitation over the Plains at some point. There is a large system offshore the California coast, but at this time we are not concerned with it.
By Andrew at 7:55 PM No comments:

Work will be done on weather models and winter weather pages

We will be initiating work on the two pages this afternoon.
The pages may be down at times as we work.
By Andrew at 11:50 AM No comments:

When will Winter Weather finally come around?

We are currently thinking the first 2 weeks of December will be the time when winter weather begins to surface over the US. While we have already had a snowstorm in the Plains and Upper Midwest, winter is still not 'here', so to say. So why is it still acting like fall?
The PNA is playing a part.
The PNA (Pacific North American Pattern) is a variable which oscillates between positive and negative. Figure 1 shows the positive phase while Figure 2 shows the negative phase.
Excerpt from Wikipedia:
The positive phase of the PNA pattern is associated with above-average temperatures over western Canada and the extreme western United States, and below-average temperatures across the south-central and southeastern U.S.


The PNA is in a strong negative phase at this moment, and likely won't come out of it for the rest of the month. However, there are signs that it will begin weakening in the final days of November, shown below by weather models.

Should this PNA become positive, there is a chance that colder weather may begin to have an effect on the US.
By Andrew at 7:22 AM No comments: