Why This Winter Will Be Different Than Last Winter

I am here to present to you one of many reasons why this winter will not be a repeat of last winter.

This summer, we have seen the stratosphere keeping at roughly normal levels- an encouraging sign for the upcoming winter. If one uses the summer months to help determine the winter forecast, like what I observed above with 2011-2012, I would say that the stratosphere appears inclined for a good winter, as far as the El Nino goes for the East Coast.

Andrew
By Andrew at 5:44 PM 4 comments: Links to this post

There is a fairly strong disturbance to the immediate north of Michael. I believe that this will get Michael up and moving, but the movement will likely end up going west, towards Leslie.

It seems that strong cyclones will try to orbit each other, and this is referred to as the Fujiwhara Rule. In this rule, two strong cyclone vorticies will attempt to orbit each other, and this may very well happen to Michael and Leslie. As a weakening Michael moves towards Leslie, Leslie ought to try and also shift towards Michael. Whether this happens remains to be seen, but will be something to watch for. 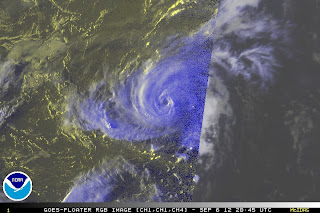 Michael is currently a major Category 3 hurricane, with a well defined eye, eyewall and nice structure. Because it is in the northern Atlantic, weakening should begin shortly, with Michael dissipating by the time 10 days from now are up. Nonetheless, Michael is likely to continue to put on a show of its cloud structure over the next several hours before final weakening starts and Michael becomes nothing. 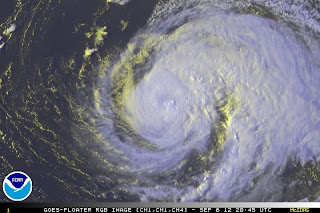 Leslie is also a hurricane, but at a minimum strength Category 1, with winds of 75 MPH. Any weakening would put Leslie back into tropical storm status.

However, I am seeing a depression in what appears to be the center of Leslie. Whether this is the forming of an eye or not, it is something I believe should be eyed closely over the next several hours, as this could indicate strengthening.

Andrew
By Andrew at 4:35 PM No comments: Links to this post 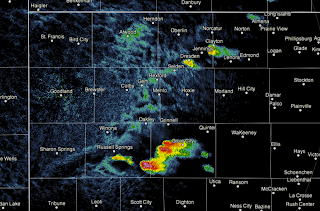 Strong thunderstorms have begun firing in northwestern Kansas, where two cells have so far formed. It appears that two other cells are also building to the north of the dominating cells.

Analysis of the atmosphere in the area indicates that these storms are forming in the midst of a tight gradient of moisture in the lower levels of the atmosphere, as well as an equally sharp gradient of instability. Given that these storms are already this strong before entering the strongest instability, I worry about the potential these storms have.
Despite relatively unfavorable convection and lower level shearing, bulk shearing stands at a fair 40-50 knots ahead of the storms. It should also be noted that the 700mb layer indicates a corridor of moist air centered over these cells.

All of the above taken into consideration, additional initiation appears likely. Favorable instability and relatively favorable shearing induces the potential for supercellular storms in the region, those of which will have to be watched.

Andrew
By Andrew at 4:22 PM No comments: Links to this post 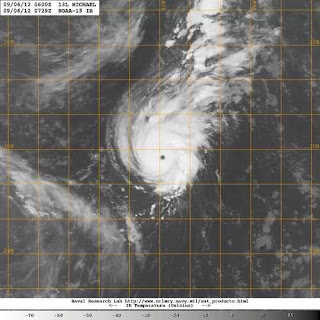 Hurricane Michael has strengthened into a Category 3 hurricane, as a well defined eyewall is shown to the visible satellite imagery, and the storm dawdles around the Atlantic.

Michael is currently forecast to meander around its current location for a few days, before taking off northwest. As this meandering takes place, Michael is expected to slowly weaken with time. After Leslie shoots off to the northeast, it looks like Michael will follow in her path and also go north.

It appears the two storms will be intertwined together, trying to keep up with each other as they move off north. While Michael is the stronger storm, it appears the much-larger Leslie will be able to pull Michael into her grasps and carry the both of them off into the northern Atlantic.

Andrew
By Andrew at 7:23 AM No comments: Links to this post