Tonight, we will be watching scattered clusters of showers and dying storms dissipate, but probably stick around into the midnight hours. Even then, some showers may continue as a low pressure system will be generally stationary on the East Coast. Farther out west, a low moving out of Colorado will push a cluster of showers and storms into the Kansas/Nebraska border, where a severe thunderstorm watch is in effect at this time for a little while more. Some showers will also be present going into Utah, and a much more isolated shower/embedded storm activity up in Montana in the presence of a low pressure system.
By Andrew at 8:53 PM No comments:

This is a video captured from someone at the Indianapolis State Fair when the stage collapsed.

BEFORE YOU WATCH, BE ADVISED THAT THIS VIDEO IS GRAPHIC. VIEWER DISCRETION IS STRONGLY ADVISED.


Video from derhamm
By Andrew at 7:25 PM No comments:

Hello everyone, this is the 2nd version of the 2011-2012 winter forecast for the US.
The Weather Centre has determined that a weak La Nina is likely going into this winter. The CPC has issued a La Nina watch, indicating a La Nina is possible but not certain. Let's start off by taking a look at current Surface Sea Temperature (SST) charts. 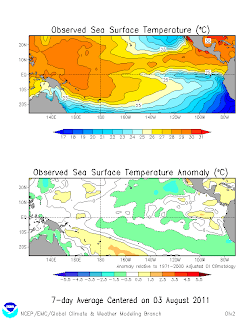 To the image at the top, we see SST anomalies aren't displaying any significant signs of a La Nina. However, with the SST's falling rapidly, it can be expected that a La Nina will occur. And while many other factors go into these forecasts, this remains our preliminary forecast, and we will base it as such.

Something else we can forecast for is the NAO, or North Atlantic Oscillation index.
The NAO is basically associated with a permanent low pressure system over Iceland (Icelandic Low) and permanent high pressure system over the Azores (Azores High). These two vary in daily and monthly etc. strengths, and that variation is called the NAO. Below you can see an example of the variations in pressure.

You can see how the NAO went negative during practically the whole 2010-2011 winter. Recently, the NAO has also been down. When the NAO is negative, it leads to heat waves across the US. you can see how the heat relates to the negative NAO by taking a more short-range past look at the NAO below.

You can compare the recent massive heat waves with the NAO index.

All that information considered, we have constructed the 2nd version of the 2011-2012 winter forecast. See the charts below.

The Weather Centre anticipates much of the North US to be cold and possibly frigid. And while that may be too far south, it is expected that at least some of the southern US will be warm. This comes as solar activity begins to decrease to a very large degree. This will actually cool the whole world down, but since we will be entering at least a slight La Nina, the southern US will be at least a bit warm.

Precipitation will probably take another slight form of last year, but at this point, i'm not really sure. The reason is that there are tons more parameters that we are not able to correctly forecast at this time. That said, we are making an educated guess on this precipitation forecast.

It will be more snowy in the Northeast as more monster storms will bear down on the area. Additionally, there will probably be more snowfall in the Great Lakes into the Upper Midwest, with the best likelihood in the lake effect snow areas and Upper Midwest. But we will see.
By Andrew at 3:00 PM No comments:

The 2nd version of the 2011-2012 Winter Forecast will be released in ONE HOUR.
Please note this post is from August.
By Andrew at 2:02 PM No comments:

Above is a radar image at 7:57 CDT of Indianapolis. At the Indianapolis State Fair, hundreds  or even thousands were waiting for the band Sugarland to begin performing when the stage collapsed, killing 5 people and injuring dozens. So, what caused this tragic event to happen?

Q: What caused the stage to topple?
A: Look at the radar image above. Do you see a thin bright green line right in front of the storms? That is called 'outflow', or rain-cooled air. Like spilling liquid on a floor, thunderstorms will shoot down bursts of rain-cooled air that will spread out in all directions. If it is strong enough, it may even show up on radar, like it did last night. That outflow can be dangerous with very strong winds. As that outflow came through, the winds were so strong that the stage collapsed.

Q: How strong was the wind?
A: The National Weather Service estimated wind speeds at 60-70 MPH.

Q: Why didn't people just run away from the stage and go inside?
A: The outflow traveled so fast and came before the storm, so people watching the radar may have been unaware that the outflow had formed and was coming before the storm.
By Andrew at 12:42 PM No comments:

Email ThisBlogThis!Share to TwitterShare to FacebookShare to Pinterest
The Weather Centre extends its condolences to the families affected by the deadly Indianapolis stage collapse in which 5 people were killed.
It is estimated that wind gusts reached 60-70 mph.
By Andrew at 8:33 AM No comments: