It looks like spring is going to make a huge comeback in the next week, as model guidance is building consistency with very warm temperatures encompassing everyone in the Plains and east.

Model forecasts of medium-range mid-level height anomalies show a massive ridge building over North America in the next 6-10 days. The European model (left) has this ridge centered in southeast Canada, bringing unusually warm temperatures to those in the East and Central US. The American GFS model on the left portrays this ridge of high pressure splitting into two areas of interest- the West US and Canadian Maritimes. The two model solutions are extremely different with the atmospheric set-up, but predicted temperature spreads are really pretty similar between the two forecast systems. 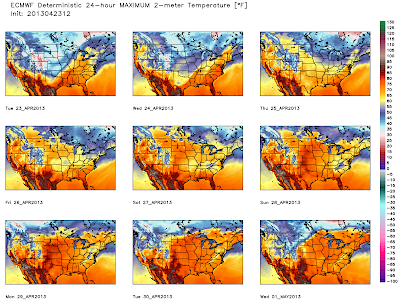 This nine-panel image of predicted maximum temperatures over the dates listed below each image show how this massive warm-up is projected to evolve. The warmest temperatures seem to want to go over the entire nation, save the Rocky Mountains. The strength of the ridge shown above would certainly support such an idea of widespread warmth, so my position on the idea of this extreme spread of warmth is not one of rejection.

Andrew
By Andrew at 2:46 PM 2 comments: Links to this post