A strong coastal storm is expected to hit the areas already beaten down by Superstorm Sandy. This new storm system will further hamper recovery efforts and could very well be a major set back to those trying to get their lives back in order. Let's jump right in to this.

This is the ECMWF at hour 72. The ECMWF maps I will show you in this post have a 500mb map on the left (to show high/low pressure areas (which are purple/red, respectively)), as well as a MSLP map to show the high/low pressure symbols on the right. Notice the low pressure system on the Gulf Coast, signified by the higher vorticity areas on the left image. At this time frame, we also see another piece of energy sliding to the southeast. This energy is shown in the Plains as another low pressure system, and will eventually become a big player in this coastal storm.

Fast-forwarding to hour 96, we have a strong low pressure system now developed from the original Gulf Coast system. This stronger disturbance now sits off the Southeast coast. Note how the second piece of energy, the one in the Plains, has now moved further to the southeast in the left image. At this point, the two pieces of energy are just beginning to come together into one storm system, known as phasing in the weather world. The first, strong system in the Southeast is pulling cold air to the south. This cold air is shown as the red line extending across the Northeast and Midwest. Anyone north of that line would theoretically have snow, anyone south would experience rain. Don't mind the red lines in Texas and the Gulf of Mexico or the Arctic.

Finally, at hour 120 (equivalent to 5 days away), the two systems have now merged in a fashion all too familiar. Hurricane Sandy merged with a system as well, which was why she got so strong. The same case applies here, where the two pieces of energy have now combined into one strong system and have moved up the East Coast. This storm system will be nowhere as strong as Superstorm Sandy, but this Nor'easter will be able to kick up some high seas, gusty winds and heavy precipitation, putting a halt to many recovery efforts in the wake of Sandy.

Andrew
By Andrew at 5:09 PM No comments: Links to this post

"This winter and last winter will be polar opposites once everything is set and done."


Hello everyone, and thank you for viewing my Early November Winter Thoughts. This is essentially my latest forecast for this winter, although it will not hold forecast graphics. If those are requested and I am able to fit time into my increasingly-busy schedule, I will make them.

We'll start off with the El Nino-Southern Oscillation, or ENSO. The ENSO phenomenon involves water temperatures in the Equatorial Pacific, specifically to the west of the South American coast. The ENSO has two stages, a positive (El Nino) and a negative (La Nina). The water temperatures are warmer than normal and cooler than normal in the Pacific, respectively. Let's take a look at the latest ENSO chart:

The chart we want to check out is the bottom one, the temperature anomalies. As you can see, the waters just off the coast of S. America are pretty varied, not really putting up a definitive phase as far as El Nino or La Nina goes. Further out west, near the 180 line, we see a large body of warmer than normal waters. This is what is referred to as a west-based El Nino. You're probably wondering what West-based means.

This is an animation of the west-based and east-based phases of the El Nino and La Nina. The charts define temperature anomalies. The difference between west and east based is that in a west-based ENSO phase, the coldest/warmest waters of a La Nina/El Nino are located to the west, near the 180 line. The east-based phase holds the anomalies near the coast of S. America.

The animation above spells out a West-based El Nino as having cold temperatures in the Eastern US and warmer than normal temperatures across the Western US. That said, if we were to only rely on the ENSO for winter forecasts, one would anticipate a cool East US and warm West US.

Unfortunately, the atmosphere is equivalent to the biggest puzzle in the universe, controlled by so many recognized and unrecognized factors. For now, though, to cover two additional factors, I will copy-paste information from the Final 2012-2013 Winter Forecast that remains relevant to this day.


The AMO is called the Atlantic Multidecadal Oscillation. It has a warm phase (positive) and a cold phase (negative), similar to that of the ENSO. In the positive phase, the AMO incites warmer than normal temperatures across the Northern Atlantic, as seen above. These warmer temperatures are reciprocated down into the West US. As of now (and into this winter), we are in a positive AMO.

The AMO is characterized by water temperatures in the Atlantic, hence the Atlantic Multidecadal Oscillation. As stated, the positive phase carries warm temperatures in the northern Atlantic. As I had inferred with the sea ice, or lack thereof, a ridge can set up when the environment is unusually warm. The same goes for the AMO. Notice where the warmest temperatures are found in a positive AMO in the image above- they are found in the waters just south of Greenland and in northeast Canada. This would mean a ridge may very well set up over these areas. And if you know a little something about an index called the 'NAO', you may know that ridging over such areas provides cold air to move south into the Northeast. The same applies to the positive AMO, and that is what we could very well see this winter. 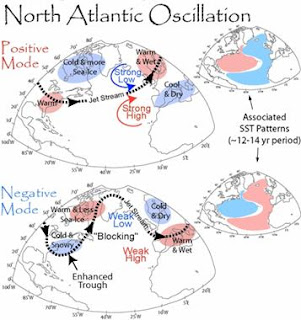 The North Atlantic Oscillation, commonly referred to as the NAO, is a pattern widely recognized by many in the Northeast. A positive NAO brings warm East Coast temperatures and a generally boring storm pattern, while the negative NAO puts on a show and diverts the storm track north. This storm track takes storms down into the Gulf of Mexico, where they gather immense amounts of moisture. From there, the negative NAO takes the storm and shoots it up the East Coast. As the storm system does so, it rapidly strengthens. This strengthening, combined with moisture from the Atlantic, brings intense winter precipitation, ranging from feet of snow to inches of rain in only a couple of days. The AMO has relations to the NAO in that, as a +AMO forms, Arctic waters warm and enhance potential for blocking (high pressure formation) over Greenland, which is a negative NAO. 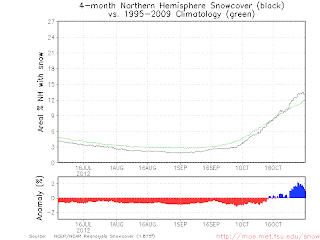 Something of additional interest is Siberia. Yes, Siberia, Russia. In October, it has been found that the anomaly of snow cover in the Northern Hemisphere can accurately predict the Arctic Oscillation for the North American winter. If we take a look at October's snow cover anomaly we see an overall slightly above normal snow cover rate in the first half of the month, then an explosion of snow in the second half of the month.

This above normal snow cover amounts to the expectation that the Arctic Oscillation will be negative through the winter, especially in the second half. The negative AO provides an opportunity for cold weather to break south into the East US, as well as divert the storm track to the south. As ridiculous as this Siberian theory may seem, it worked last year- below normal snow was seen in October 2011, and look where we ended up for that winter.

Taking into account several other factors that will not be mentioned due to how long this post would end up being, I have come up with the following conclusions for this winter.

•Variable temperatures in December. Snowfall is centered in the East, particularly in the Midwest, Ohio Valley and Northeast.
•January continues a variable trend, but the end of the month brings a brutal chill. Snowfall centered more towards the Northeast.
•February holds brutal cold weather. Midwest, Great Lakes, Ohio Valley, Northeast cash in on snow. Plains also gets in on the action.

These conclusions are very long range and thus prone to 'busting' (not verifying). However, this is my best guess, and I believe that what I typed above is the closest I can get to being correct, based on the latest indices.