As I have been emphasizing for days on end, the polar vortex is getting torn to shreds, and continues to look closer and closer to near-collapse with every model forecast. I will explain what is making it do so, and what it would take to make the vortex collapse.

These are two forecast images from the ECMWF model, with the top forecast showing the top layer of the stratosphere at 1 millibar, and the bottom forecast showing the lowest layer of the stratosphere at 100 millibars. Note how the 1 millibar layer shows high pressure covering the entire Arctic Circle, with the polar vortex now split into two vortices. This full split is much like cracking an egg- if you crack it into two, the yolk of the egg spills out. In this case, the cold air at the top of the stratosphere could flow down through the stratosphere, possibly even to the surface. As for the 100mb layer, high pressure is trying to build into the North Pole and attempting to split up the polar vortex, as seen in the 1mb layer. This is like partially cracking an egg- some yolk leaks out, but not all of it. Either way, it's progress.

This zonal wind forecast from the ECMWF, valid for 10 days out, shows very negative zonal wind anomalies in much of the stratosphere from 70N - 90N. These deep negative zonal anomalies signifies the creation of strong high pressure in the area, a.k.a. east winds. Sudden Stratospheric Warmings tend to initiate these different zonal wind values, and thus help to really hurt the polar vortex's strength. Seeing as how these easterly winds suddenly skyrocket in the entire stratosphere in the 10 day forecast, it's not all that far-fetched to continue to see severe damage inflicted upon the polar vortex at all levels.

These two graphs above show several things of importance. We'll start with the first set of image panels. The very top image shows an aqua-colored line of zonal winds at the 1 millibar level. We can see the sudden crash of the zonal winds at the 1mb layer, enhancing the forecast of zonal winds shown 3 images above this sentence. Let's now go to the bottom image of the first set of images. This shows EP-Flux, and essentially measures the strength at which warm air flows up into the stratosphere. The longer the arrow, the stronger the EP Flux and the more warm air wants to shoot into the stratosphere. Notice how it dies down again at the end of the forecast period, meaning the sudden stratospheric warming would stop.

The bottom set of images shows temperature forecasts. We want to pay attention to the first three images. They show the 10mb layer temperature for the first image, the 30mb temperature for the second image, and the 10mb/30mb temperature forecasts superimposed on each other. Now, we can see that both layers of the stratosphere warm nicely through the forecast period, a sign of the aforementioned sudden stratospheric warming (SSW). Even better for cold prospects (and polar vortex collapse pospects) later on is how this warming at the 10mb and 30mb layers does not crash back down to cold levels right after the warming, as is usually observed.

Some potential vorticity forecast images show a complete collapse of the vortex at what I assume to be the top of the stratosphere:

So all in all, the polar vortex is getting torn apart now, and will only get torn apart in the future even worse. A collapse of the vortex in the upper stratosphere appears likely, and it could only be a matter of time before the rest of the stratosphere starts experiencing big troubles as far as being able to maintain itself. 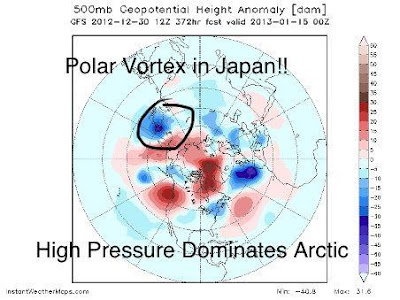 The new 12z GFS forecast shows the polar vortex greatly displaced. Instead of being in the Arctic, it's all the way down in Japan! It appears another piece of the vortex may be off the coast of Europe. High pressure trapping the vortices south would theoretically deliver yet another crushing blow to the polar vortex, which I don't know will be able to recover fully in Jan-Feb.

Significant Cold Ahead For January-February

Significant cold is ahead for the months of January and February, especially late January into February. I'll explain what could cause this.

This chart of observed stratospheric temperatures for the years of 2011 and 2012 shows tat we have had two recent warming events, as shown in the red temperature line spikes on the far right of the graph. When these spikes occur, they are called Sudden Stratospheric Warmings, or SSW events. When an SSW occurs, warm air from lower levels of the atmosphere is forced up into the stratosphere. Because of the warm air being forced up, cold air originally in the stratosphere is displaced and forced down to fill the void left by the warm air now being pushed into the stratosphere. This is why we want SSW's to happen in the winter, so cold air can come down to the surface.

This ECMWF multi-panel graph forecast shows temperature forecasts for different latitudes. We see that the top 3 panels show significant and sudden warming of the upper stratosphere, including the 10mb and 30mb layers. This is a direct result of the sudden stratospheric warmings, and if these forecasts happen, it is certainly plausible that significant amounts of cold air will be displaced down into the troposphere (where we live). Even better news is how the two stratospheric layers do not directly cool down after the warming.

Even better news for cold air prospects is how the polar vortex is getting torn apart. For those unfamiliar with the polar vortex, it is the driving force behind the Arctic Oscillation and varies in its strengths. When it is weaker than normal, the polar vortex releases cold air down into the troposphere, much like the air displacement example shown above with the sudden stratospheric warming.

These two forecasts above of different isentropic layers show how decimated the polar vortex will be. The colors depict potential vorticity values, much like how high vorticity values signify low pressure systems at the tropospheric 500 millibar level. The two forecasts above show virtually no polar vortex to be found- the potential vorticity that IS present doesn't resemble a polar vortex in either of these two layers. This is exactly what I have been warning about- a polar vortex collapse. It seems to be happening in the upper stratosphere. If it propagates down to lower layers of the stratosphere, there's no telling what could happen.

Now, here's the big thing that will kick off the cold for mid-late January: CROSS POLAR FLOW.

The above image is for the lowest level of the stratosphere- the 100mb layer. I have outlined my best guess as to where the jet stream is. The plus sign signifies the North Pole. Using the outlined area, we see that the jet stream starts in Siberia, shoots north into the North Pole, and crashes south into the Plains, Great Lakes, Midwest, Ohio Valley and Northeast. The jet stream crossing the Polar region and then fleeing south into the US is called a cross polar flow and is commonly identified with the strongest cold air outbreaks in the US.

The stratospheric ECMWF is not the only model and atmospheric layer showing such a cross polar flow: 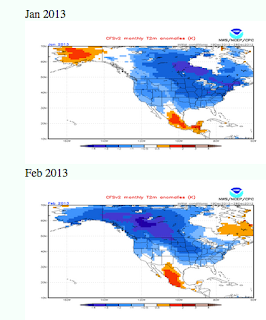