This is an update to the earlier post on the January 28-30 Potentially Historic Southeast Snowstorm event. 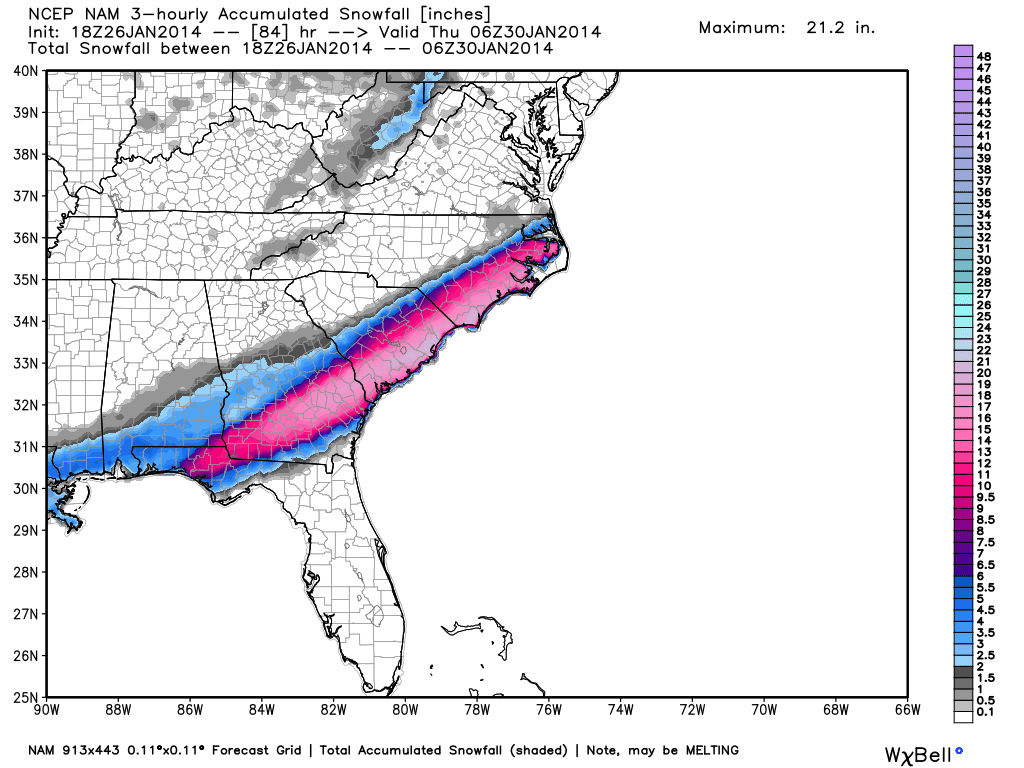 We'll begin with the NAM model, which has actually beefed up its snowstorm amounts since its previous run. The NAM model now brings snow amounts near 2 FEET in the hardest hit areas, namely eastern South Carolina into eastern North Carolina. We see widespread amounts in excess of 12 inches slathered across the Southeast from Pensacola, Florida to southern Georgia and into the Carolinas. Accumulating snow also hits far southern Mississippi and Alabama, even extending into Louisiana. The NAM indicates the maximum amount possible in its solution is 21.2 inches, which would most likely hit somewhere in the Carolinas. I maintain my position on the idea that the NAM is too high with snow amounts, which would leave the Southeast paralyzed for not days, but possibly over a week or two. 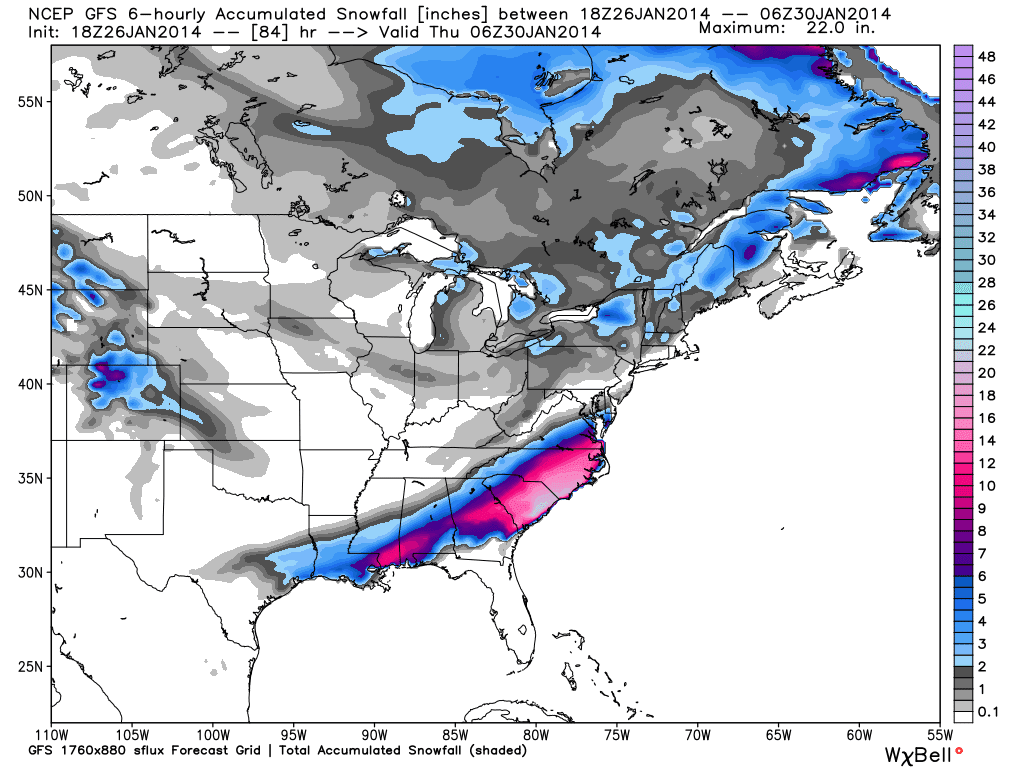 The 18z GFS model really beefed up its snowfall amounts, bringing amounts as high as 22 inches to eastern South Carolina into eastern North Carolina. The model wants to begin a swath of accumulating snow in eastern Texas, including the city of Houston, before blowing up totals to near 12" amounts in southern Mississippi and Alabama. From then, significant snowfall pummels the states of Georgia, the Carolinas and even Virginia. Once again, I'm a little skeptical of the high snowfall amounts. Since models have been having trouble handling the energy responsible for this snowstorm potential since the get-go, confidence in these extreme snowfall totals is not that high. 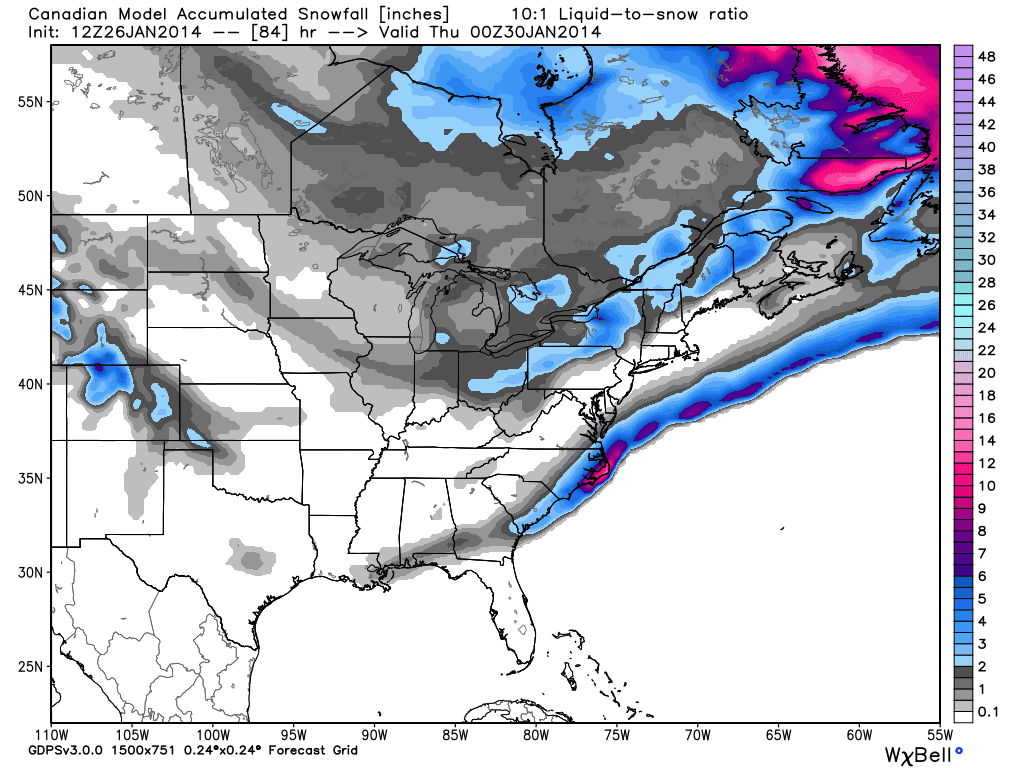 We now go to the Canadian GGEM model's projection, which is far less bullish than the NAM or GFS models. The GGEM begins with a bit of snow in southern Mississippi and southern Alabama, only beginning to bring up snow totals in far eastern South Carolina and really getting going in extreme eastern North Carolina. I don't think we'll see amounts this low- while I'm not buying the extreme snow totals forecasted by the already-discussed GFS + NAM, I don't think we'll see these low totals either. 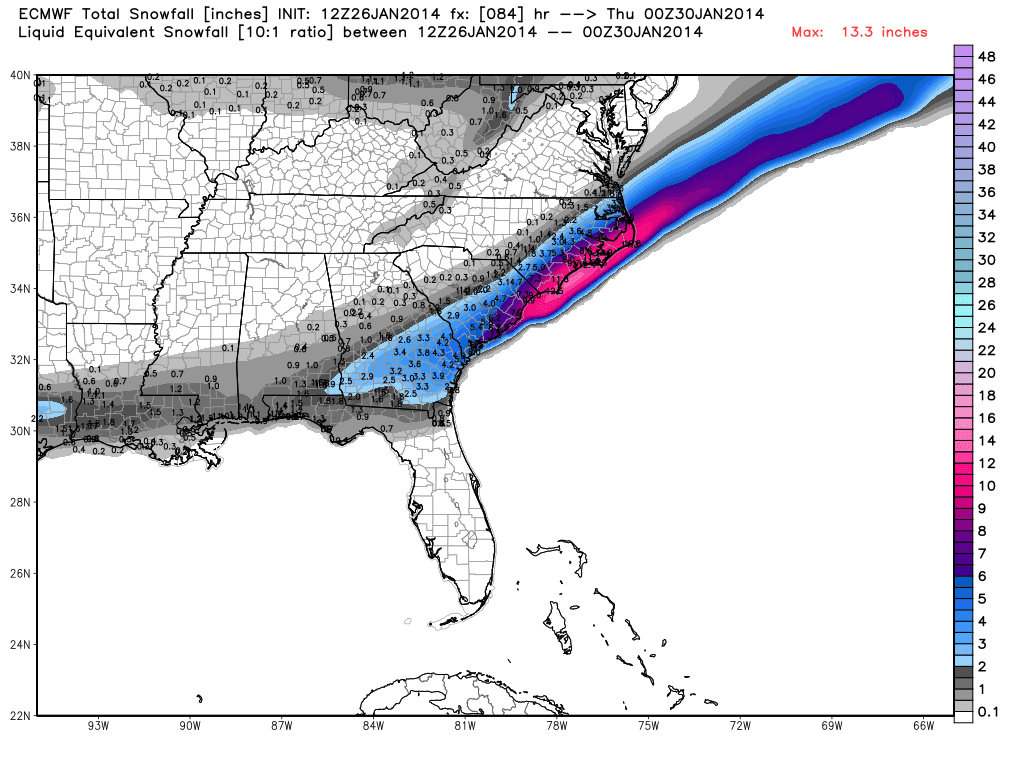 Lastly, we take a look at the European ECMWF model. The ECMWF starts out with accumulating snow in eastern Texas before weakening, only dropping dustings of snow throughout southern parts of Louisiana, Mississippi, and Alabama. We then see 2-4" totals popping up in Georgia, before 6" amounts form in far eastern South Carolina. The bullseye here hits the far eastern areas of North Carolina, where the ECMWF lays down 13.3". I'd like to see this model beef up amounts across the board and draw the higher totals back to the northwest, like the GFS and NAM do. I expect we will see 6" totals in Georgia, with totals near a foot (possibly just over that benchmark) in the Carolinas. 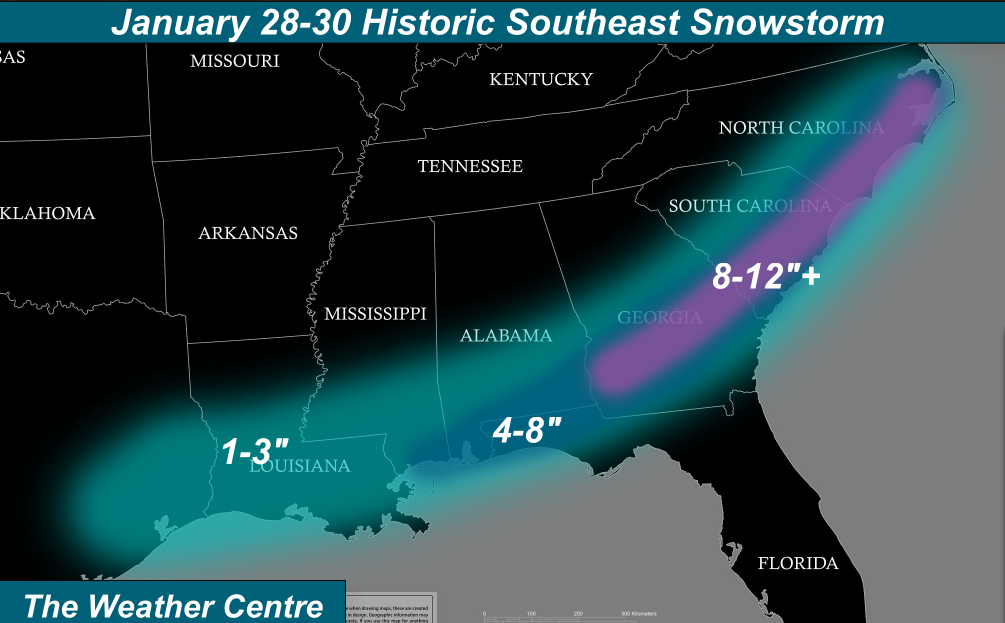 To sum up, I expect we see a swath of 1-3" snows from eastern Texas to southern Louisiana, and into southern Mississippi. From there, accumulations of 4-8" look to pop up in southern Alabama and the panhandle of Florida, before accumulations really ramp up in Georgia, South Carolina and North Carolina, where I expect 8-12"+ to fall.

Andrew
By Andrew at 6:36 PM 3 comments: Links to this post

Things appear to be setting up for a potentially historic snowstorm in the Southeast over the January 28-30 period. 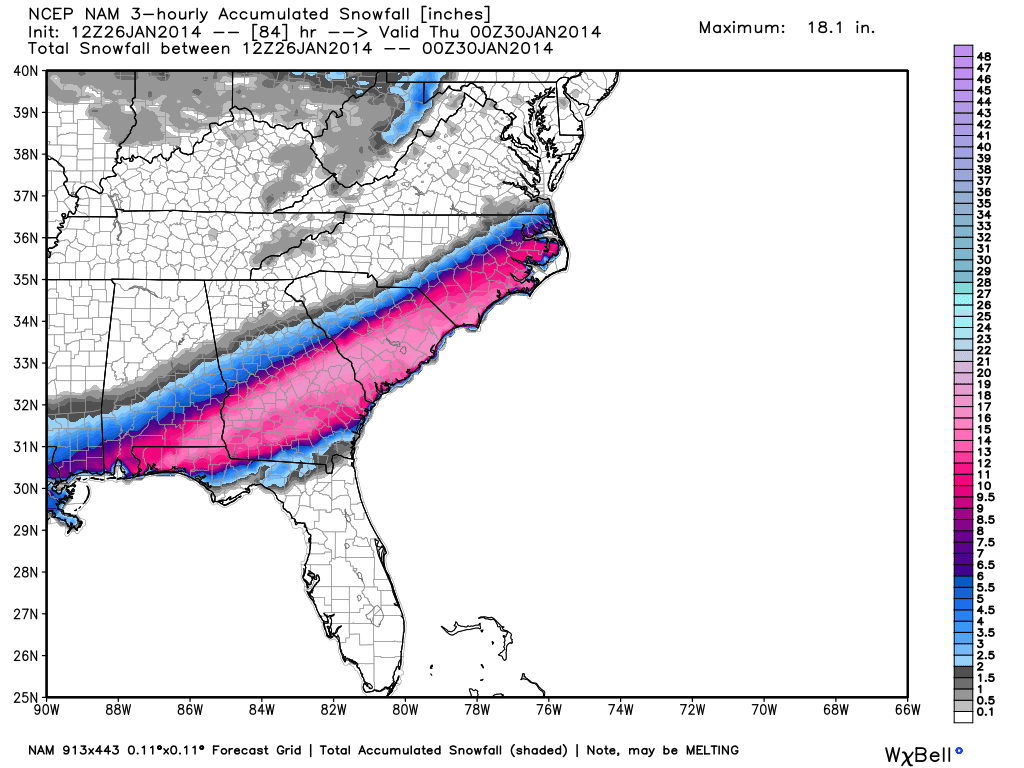 The NAM model is the most aggressive with this storm system, dropping as much as 18.1" inches on the Southeast. As the legend on the right shows, we would be seeing accumulations over 6 inches in far southern Mississippi, and snow amounts over 1 foot slamming southern Alabama, much of Georgia, much of South Carolina, and eastern North Carolina. There is also 12"+ being forecasted in the panhandle of Florida, near Pensacola. Now, the NAM is notorious for over-doing snowfall, and I've got a feeling this situation applies here. If the storm does end up happening, you could probably cut these totals in half or so and end up with what we will see. Regardless, you get the picture: considering any snowfall in the South is a big deal, this much accumulating snow could be not only historic, but disastrous for those not used to snow falling in states like Georgia or Alabama. 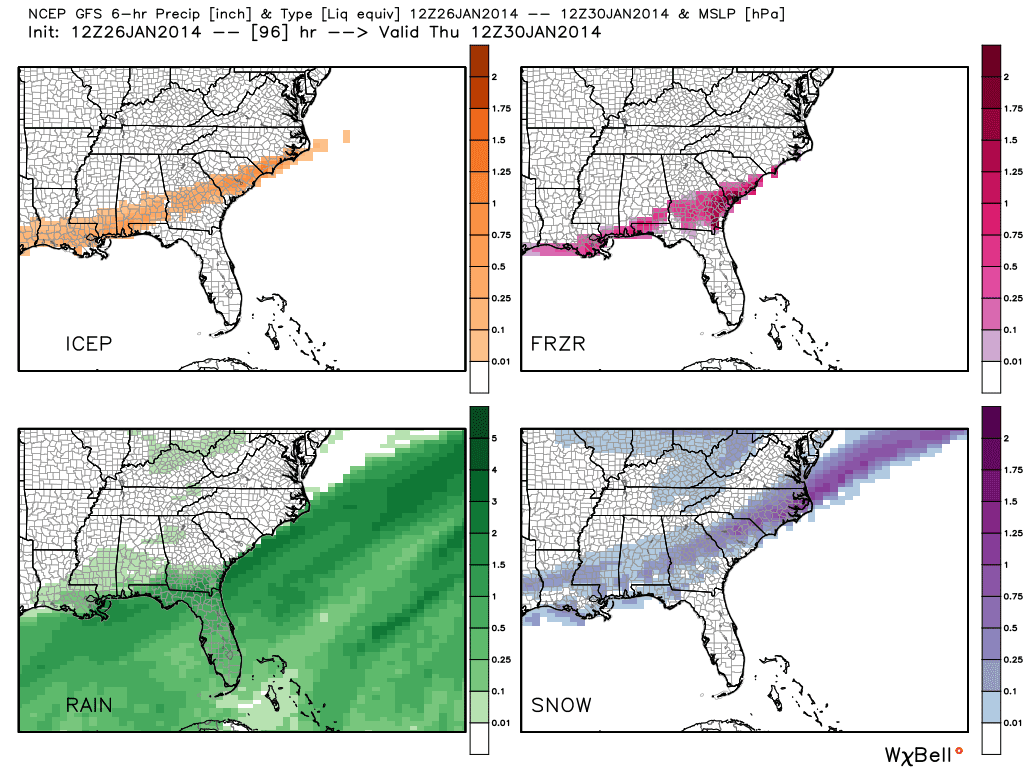 The GFS model shows its forecast for all four types of precipitation for this event: ice pellets (top left), freezing rain (top right), rain (bottom left), and snow on the bottom right. The snow panel shows liquid equivalent snow amounts, meaning 0.5" on that bottom right panel would typically equate to 5" of snow. We see the GFS puts down all types of precipitation for this event, with freezing rain and ice pellets targeting southern Louisiana, southern MS/AL, central Georgia and eastern South Carolina. The snowfall hits areas immediately north of those two precipitation types. It looks like the GFS wants to lay down nearly 10" of snow in the Carolinas, though I'd put that at closer to 8 or 9 inches, considering the snow should be more or less heavier than your standard 10:1 ratio snow, where 10 inches of snow equals 1 inch of water. The GFS, while lighter in snow amounts than the NAM, still shows a pretty intense snow event for the South, with all forms of precipitation hitting the southern states. 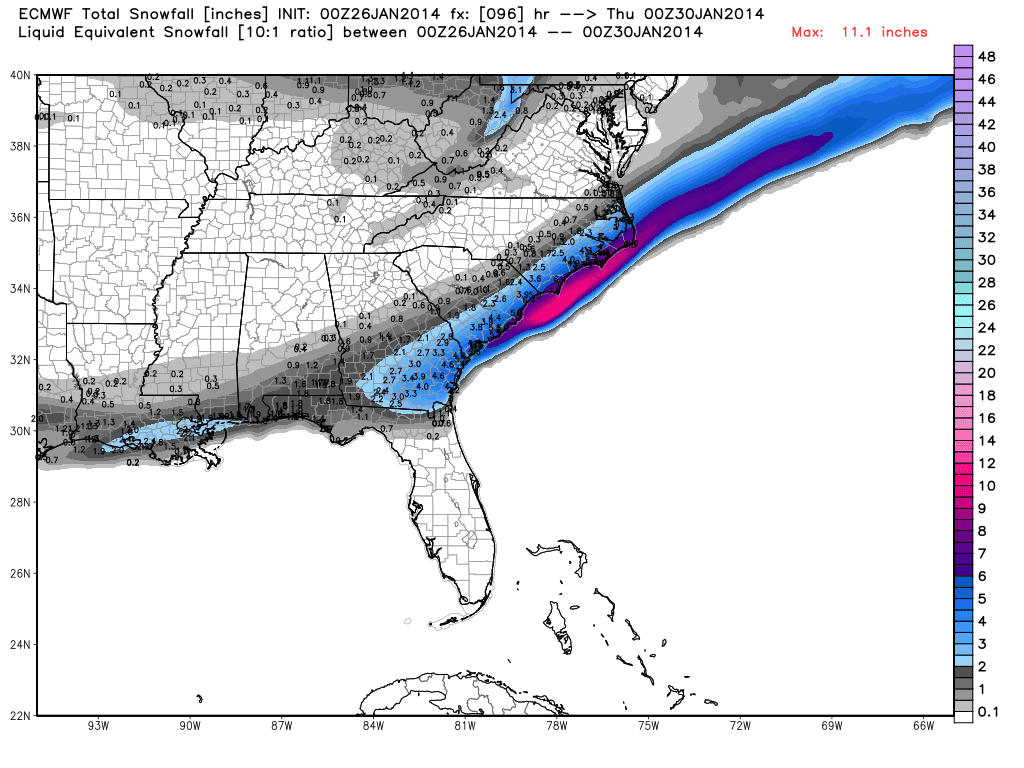 The final model to look at here is the ECMWF model, which shows a much less significant snow event. We see the heaviest snow hits the coastal regions of South and North Carolina, where 6"+ of snow would be expected. The states of Georgia, Florida, Mississippi, Alabama, Louisiana and even Texas receive only a couple of inches of snow in this scenario. Based on the ECMWF Ensembles, I think the model is a little light on snow amounts across the board, and the more conservative estimates would probably range around the 2-5" range for the states previously mentioned.

This does look like a significant, and possibly historic snowstorm for the Southeast. My thoughts on the system side with the GFS model right now, which shows snow amounts decently as shown below. It would be wise to take off a couple inches here and there, specifically in the hardest hit areas, just to account for likely mixing of precipitation during the event. 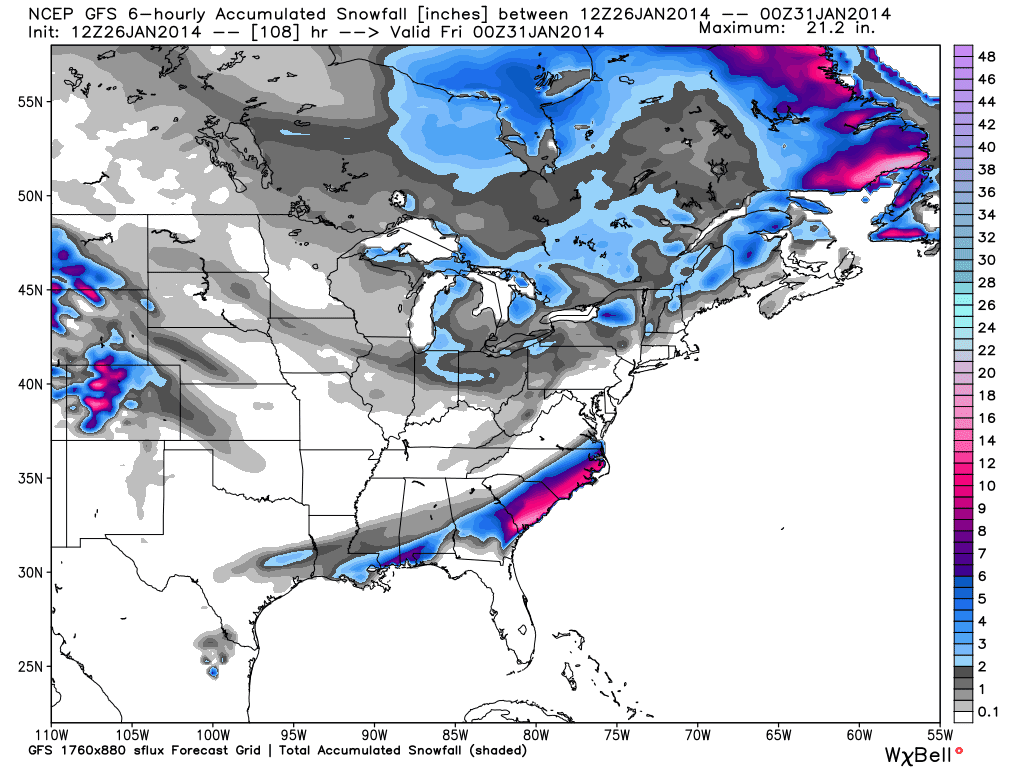 Andrew
By Andrew at 12:17 PM No comments: Links to this post