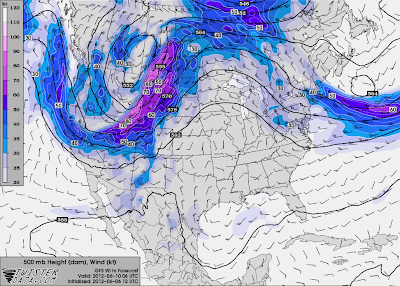 Discussion
Strong low pressure system will shift eastward and crash into Northwest US/Southwest Canada region. System will remain positively tilted as it makes its way onto land. Strong resistance and associated wind speeds will arise as strong system attempts to move east but is blocked by a ridge centered in the Midwest. The system will be forced to make a move northeast and avoid the ridge, in turn placing the severe weather threat in the Northern Plains. 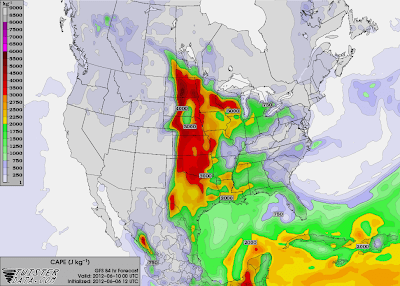 Eventually, instability of over 5000 j/kg will become available in the Dakotas, specifically in the northern region. Such abundant instability and intense lifted index values will promote potentially violent updraft thunderstorms that may very well spawn some very large hail and extreme winds. Shearing will be rather low, but such intense updrafts may very well spawn a tornado or two.

I have put out a 'High' Risk of thunderstorms for the Dakotas that may need to be extended east with time, but confidence is too low for me to do that right now. An 'Elevated' area extends across the Northern Plains, and 'Moderate' and 'Low' regions make up for the Central US.
By Andrew at 1:00 PM No comments: