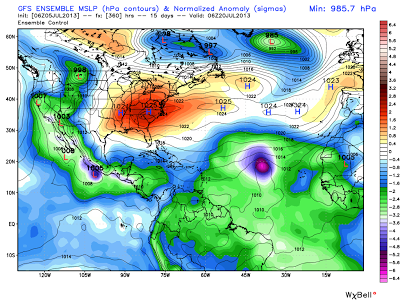 The image above shows the GFS Ensembles projecting sea level anomalies across the Atlantic basin. The image is an average of all members in the GFS ensemble suite. In this forecast, valid for July 20th, we see a large swath of below normal anomalies from the west coast of Africa to the northern tip of South America. Most pronounced in this swath is an area of significantly below normal area positioned almost due east of Cuba.

This appears to be a tropical wave that has pushed away from Africa and has strengthened into a potential tropical cyclone. The overall atmospheric flow across the Atlantic basin sees high pressure extending from the Southeast US into the waters offshore of the Mid-Atlantic. While the high pressure system in the Southeast is rather strong, we do not see prevalent high pressure in the center of the Atlantic Ocean, which means this enhanced tropical wave/cyclone would most likely stay out to sea.

Even though this may not happen when July 20th comes around, the models have certainly been aggressive with long range tropical cyclone formation in the Atlantic basin; could this be a sign that late July-August could get active?

Andrew
By Andrew at 6:43 PM No comments: Links to this post