This is an analysis of the June 29, 2012 Derecho that hit the Ohio Valley and Mid Atlantic.

The derecho's beginnings were in eastern Iowa, as a complex of thunderstorms that moved eastward into northern Illinois. As the complex moved into Illinois, a shelf cloud was observed, with this being among the many pictures taken.

From Northern Illinois, the complex began a southeast motion and passed through Indiana. As the storms moved into Indiana, they began to strengthen under the influence of more than 5000 j/kg of instability. This development was slightly hindered by the presence of a capping inversion, as noted on the 12z soundings in Indiana.
The cluster began to bow out as it entered central Indiana, as significant instability enhanced the bowing segment to the point of developing a derecho. However, in the early stages, storm reports and radar analysis indicate that hail was present on the western flank of the bowing complex before it switched to a major damaging wind threat.
Moving into the evening, the bowing complex was now a powerhouse derecho, at this time responsible for numerous reports of hurricane strength wind speeds, including a roughly 90 MPH wind gust clocked in Fort Wayne, Indiana. Needless to say, the damage form this derecho only increased as the complex continued on its way. In the evening hours, the storms encountered some fair shearing in the atmosphere, which led to rotating cells. One of them is seen below, at approximately 5:51 PM CDT. At that point in time, the derecho had become comma-shaped, with this tornado-warned cell leading the head of the comma. 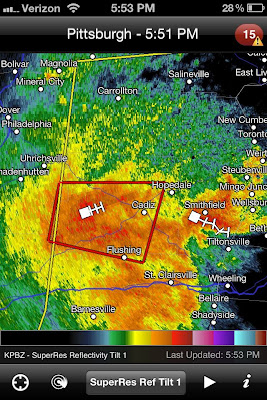 Despite the presence of rotating cells, only two unconfirmed tornadoes were reported. Those reports originated from Newcomerstown, Ohio. 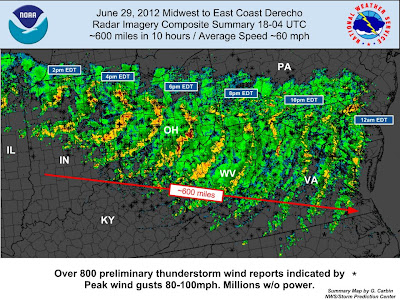 A composite radar image of the derecho shows just how widespread and destructive the complex was, with the strongest cells seen in Ohio. Weakening did occur after the derecho passed through Ohio, but still continued to produce damage into the Mid Atlantic states. The derecho did span roughly 600 miles when it was all set and done, not counting its presence in Iowa and Illinois. 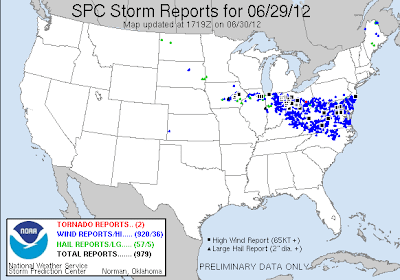 Storm reports from the derecho were widespread, with 920 wind damage reports filed into the National Weather Service offices across the Ohio Valley and Mid Atlantic. Notice the slacking off of reports in the Mid Atlantic. That comes as the derecho hit the Appalachian Mountain range, and those mountains did indeed cut down on the power of the system. However, as observed right along the coast, there was still considerable damage from the derecho until the very end.

In summary:
A derecho formed June 29, 2012 in northern Indiana. It then fanned out into a powerful complex of damaging thunderstorms, in which at least 8 people lost their lives. This derecho spanned 600 miles and produced countless wind speeds surpassing 60 MPH. Millions of dollars in damage will likely be used to repair what has been lost.

GFS and ECMWF in good agreement over high pressure remaining in place over much of the United States in the next 8-10 days, providing unrelenting heat to flourish across the country. Models also agree in extension of ridge north into western Canada, where it will act to hold a deep low pressure system in place over the Gulf of Alaska, and an atmospheric traffic jam looks to be forming.
Both models also indicate the presence of a low pressure system in southeast Canada. However, the ECWMF does give this disturbance more strength and has the ridge in western Canada weaker than the GFS. Essentially, the ECMWF appears more inclined to break down the traffic jam. If this break down would occur, the low pressure system would likely be shoved down south into the eastern US. The ridge in the US would be pushed east, and the ridge in Canada would get moving and allow the Gulf of Alaska's low pressure system to skirt along the US/Canada border and likely ignite some severe weather in the Northern Plains along the still-existing Ring of Fire. However, it is suggested that the central and eastern US would be free of the heat due to a shifting MJO into Phase 2. The ECMWF ensemble system has the MJO stay in Phase 2 at fluctuating strengths, which all-in-all would lead to a cooler eastern US.

A slight risk of severe weather has been issued for the Mid Atlantic and Ohio Valley into the Midwest, as well as the Northern Plains.

Surface analysis indicates low pressure is present in the Northern Plains. With a warm front nearby, the atmosphere should begin to destabilize along the front. Pop up thunderstorms could begin with rotation due to the influence of the low pressure's wind field and the proximity to the 'Ring of Fire'. Soundings validate the presence of a capping inversion in the lower leves of the atmosphere, but with instability prominent in the mid levels of the atmosphere.

Expectation is for scattered yet strong storms to develop in both areas of severe weather risk area per RAP model guidance. The areas are so big due to the scattered-ness of the storms and a general 'safety risk' to cover all areas that have a potential for storms that could turn severe, rather than covering small, individual areas that the models say will get struck.

Andrew
By Andrew at 9:53 AM No comments:

The high pressure system currently over much of the United States that is providing for high temperatures and drought conditions looks like it is settling in for at least the next 10 days. Let's take a look at two different ensembles from two agencies.

This image is from the NCEP Ensembles of the National Centers for Environmental Prediction (NCEP). This image is valid for 9 days out, and you can see that the ridge remains in place over a week from today. However, notice the low pressure system just north of the upper Great lakes. This disturbance is forecast by the NCEP ensembles to push south and essentially evacuate the high pressure system to the Western US. This disturbance's southward movement would happen 10 days from now.

This next ensemble set is the Earth System Research Laboratory (ESRL)'s Physical Sciences Division (PSD) Ensembles. You may notice that this image says hour 240 and the previous image says hour 216. That is because the NCEP ensembles initiated at 0z last night, while the PSD Ensembles above initiated at 0z 2 nights ago. Either way, both images end up at 9 days from today. The PSD Ensembles still show the ridge of high pressure over the US, but a low pressure system appears to be dipping into the Northeast rather than the NCEP's idea of a disturbance dipping into the Great Lakes. However, in both cases, the high pressure system is pushed west. It should be noted that the PSD ensembles are weaker with the ridge than the NCEP Ensembles.

So what does this all mean?
I expect the hot temperatures to continue to flourish across the nation. Thunderstorm location along the Ring of Fire is in the air. The reason? the 5880 line. It is common that storms cannot form above the 5880 line in the 500mb part of the atmosphere. So, the 5880 line can be used to forecast thunderstorms. That is why the location is up for grabs, as the 5880 line differs in the ensembles.