I have been a thorough and dedicated weather blog for the past few years, and have managed to keep a good balance of my life and this blog. However, there is business that requires my complete and undivided attention for a while.

The long range GFS model has consistently been putting a third sudden stratospheric warming in the forecast, with the upper stratosphere forecast to experience unusually warm temperature anomalies over Canada and the New England area.

The presence of a third sudden stratospheric warming after a significant warming that ended several days ago and an incredible ongoing SSW (link) would surely penetrate the inner core of the polar vortex, pushing it further and further to the breaking point, a.k.a. collapse. I have been heralding such a collapse for weeks now, and I am not backing down with its potential. While the collapse may be pushed back a bit, I am confident that a collapse (the Arctic Circle is no longer dominated by the polar vortex) is imminent in at least some parts of the stratosphere.

Let's turn our attention to the next potential Fourth SSW. This one has me very excited, because it could feature a prolonged warming event, which would only further enhance the vortex's collapse, possibly into oblivion if we're lucky, keyword "if". 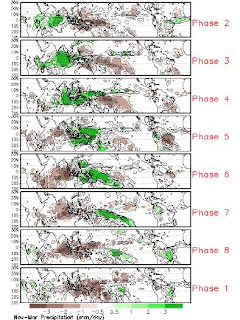 This is a forecast image of the Madden-Julian Oscillation, composed of several forecast models and ensembles. The Madden-Julian Oscillation, known as the MJO, involves placement of wind anomalies and convection from the Indian Ocean, across the Pacific and into the Caribbean. Phase 1 starts in the Atlantic and Indian oceans, and transitions east from the Indian Ocean from Phases 1 to 8, as seen in the image on the left. I am in to finding correlations between certain indices, and this is no exception. Upon some hard research, I found data suggesting that a sudden stratospheric warming can be predicted days- even weeks- in advance just by using the MJO. Here's a quick rundown of MJO phase to possible SSW in days:

So, if we use that MJO forecast graphic, we see the models going from Phase 5 to Phase 7, which is roughly a 13-24 day lag time from MJO phase to SSW. But here's the catch: the models start to circle in Phases 6 to 7, meaning the convection in the image on the left stays in the areas just east (and inside) of Micronesia. What this ALSO means is the potential for a prolonged stratospheric warming event starting in the next 13-24 days and continuing for as many days as the MJO can stay in the designated Phases.

This is all very exciting, but a major caveat is that the MJO does not necessarily always provoke sudden stratospheric warmings- it helps them along, so to speak. In this environment, an SSW would be easy to establish.

The prospects for accumulating snow over much of the nation are unusually low for the next several days, and there is one big factor causing this: the Negative PNA. 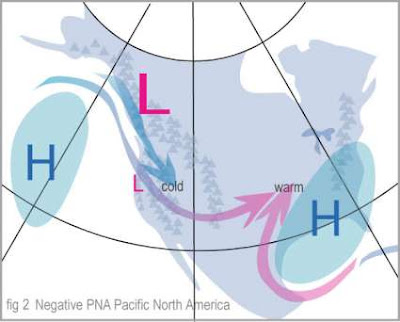 The image above depicts the typical atmospheric set-up in a negative Pacific North American (PNA) phase. We see high pressure build in the Gulf of Alaska, causing a depression of pressure to form in the Rockies. This then brings cold air to the region, as well as the North Plains. However, high pressure then forms in the Southeast and East Coast due to the presence of low pressure in the West. This high pressure redirects the storm track to favor precipitation along the Gulf Coast or in the Northern Plains. We already saw this pattern earlier this winter, and now it's returning.

There is some hope, though: 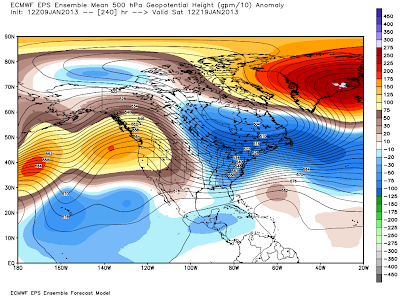 This is the Day 10 forecast from the ECMWF model's ensembles, commonly called the EPS. The EPS shows the majority of the polar vortex collapsing into the Northeast in a fashion that would inspire frigid temperatures and a very windy period in the entire East US. A negative North Atlantic Oscillation (NAO) is present with high pressure over Greenland, and a positive PNA appears with high pressure on the West Coast. I'm not too keen on buying into this idea at the moment, as other forecasts have the PNA in negative territory for a while to come.

Please do not ask if your area will receive snow, this is a general overview, not a precise snowfall timing forecast.

The reason I have not been posting about the snow is because of the scope of the warming stratosphere and it's forthcoming implications, there's just no winter storms to track. I'll bring up the snow topic on a post later today.
By Andrew at 11:02 AM 3 comments: