There is a chance of a winter storm impacting the United States in the days before Christmas, and indications are it could be a big storm. 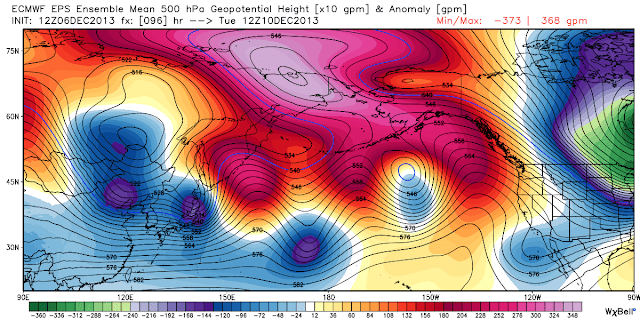 The ECMWF Ensemble mid-level geopotential height anomaly forecast places a storm system over East Asia on December 10th, as a raging high pressure system floods into the Arctic from the Bering Sea. As I have mentioned on this blog, there is a 6-10 day correlation between weather that occurs in East Asia, and weather that occurs in the United States. Therefore, with a storm projected to impact Japan on the 10th, we should keep our eyes peeled for a winter storm around the 16th through 20th.

Models have already been picking this storm threat up. 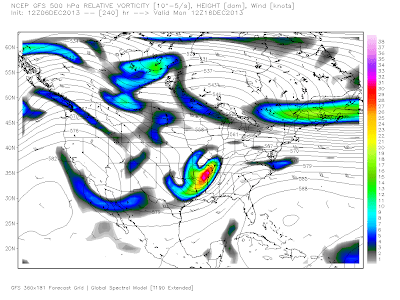 The GFS model has been quite consistent in developing a major storm system over the Plains that would the shift northeast, towards the Midwest and Ohio Valley. As the 500mb relative vorticity chart from today's 12z GFS shows, a strong storm system is projected to eject from the Plains and then shift to the north-northeast as a result of sharp ridging to the east of the storm system, as well as ridging in the Western US. These two components can combine to make for a potentially significant winter storm. 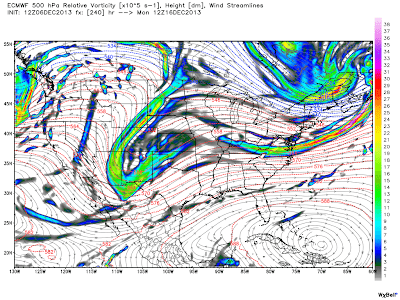 The 12z ECMWF relative vorticity forecast for the same time as the GFS image above has the energy lagging in the Southwest, but still present in the Plains and pushing east, tilting eastward as it does so. Considering the ECMWF model has been known to lag energy in the Southwest longer than it ends up being there, one could argue that the energy should be further east than the ECMWF projects it. That said, both models appear to be in decent agreement on this storm system, despite this being in the 10 day forecast range.

The Lezak Recurring Cycle should also be playing a role here. The images above show the frontal positions and precipitation areas on October 19th on the left, with mid-level height observations on that day on the right panel. For those of you who are unfamiliar with the LRC, it is a tool developed by meteorologist Gary Lezak that, in essence, can enable forecasters to predict the overall weather pattern months in advance. The gist of the LRC involves a cycling weather pattern that develops in October and November of each year; no pattern is the same from year to year. Around mid November, the LRC begins to repeat, meaning we start to see a similar weather pattern in mid November that we saw in early October. This means that the cycling pattern has begun, and it will continue to cycle on a generally unwavering 40-60 day interval (i.e., 50 days from cycle to cycle) for the next ~10 months before it dissipates over the following summer. With this season's cycle on roughly a 57 day interval, we can extend the October 19th system 57 days out and get to December 15th, just a day shy of the projected storm. With the Lezak Recurring Cycle in play, I'm liking the chances of a winter storm in this December 15-20 timeframe.

But that's not all that is rooting for this storm system.

A Outgoing Longwave Radiation hovmoller (or time vs longitude graph) shows the evolution of an upcoming Madden-Julian Oscillation (MJO) wave, as is shown by the negative OLR anomalies (meaning enhanced convection) in the blue oval on the bottom of the graph. I put in a red arrow to point at the area where the MJO wave will be when this projected storm is expected to come through.

This graphic from the Australian Bureau of Meteorology (BOM) illustrates each MJO phase and its respective OLR anomaly. Just like the hovmoller above, blues show enhanced convection (active MJO phase) and yellows show suppressed convection. If we take a look at where I put the red arrow on the hovmoller above, and trace it to the bottom legend listing longitudes, we find that the MJO wave will be at the 150E line, and using the composite image above (which shows each MJO phase with the enhanced convection in blue), we find that convection at the 150E longitude area equates to a Phase 6 MJO. 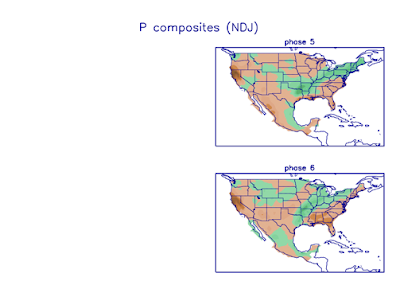 Precipitation composites for Phases 5 and 6 during the November-December-January period shows that storms really favor the Plains, Midwest and Great Lakes during a Phase 6 MJO. Dry precipitation trends in the Southeast and West favor that ridging pattern in the Western US and Southeast US that is being depicted by both the GFS and ECMWF modeling systems. All in all, the MJO is helping out this snowstorm prospect.

To summarize:
-A potentially significant winter storm may impact the Midwest, Plains and Ohio Valley between December 15th and 20th.
-The MJO, LRC, and East Asian correlation believe that this storm system is very possible in its current track over the aforementioned areas.

Andrew
By Andrew at 6:05 PM 7 comments: Links to this post