Was Superstorm Sandy Really A Result of Global Warming?

In the wake of Superstorm Sandy, a system that destroyed homes, business and lives, some are speaking up about how this occurred in response to climate change. But was that REALLY the reason why this happened?

Sandy was a low-end hurricane.
If those who are proclaiming global warming's presence in this system really believed it, you would see a major hurricane, not a modest Category 2 hurricane, like Sandy was. Now, could such extreme events happen thanks to a system as weak as a tropical storm? Absolutely. But those in favor of climate change factoring into Sandy are treating it like a once-in-a-lifetime event (It was), but like a super-hurricane rather than a convenient merging of two storms, described below.

What Sandy did happens DOZENS of times a year.
The way Sandy got so strong was by phasing, or two or more storms combining in to one storm system. This phasing enabled two bodies of energy to come together, and the presence of the Atlantic Ocean only fueled the fire. But the truth is that phasing of storms happens on a very regular basis. This just happened to be a right place, right time moment for a hurricane and a strong Canadian system.

This storm was not as powerful as some believe.
Don't get me wrong when you see this title, Sandy was a VERY strong storm system. However, many are overestimating the strength of Sandy. The only reason this system had such a big impact was because it struck the nation's economic and political homeland. Think about it. If Superstorm Sandy had hit, say, a desolate area in any nation, would you still think it was as powerful? Again, this storm was very strong, but the human and cultural effects are making many overestimate this event.

Global warming takes time.
Let's say that Sandy was a result of global warming/climate change. If that were the case, then every coastal storm following a path similar to Sandy's track should have been much stronger. Global warming is not a 'drive-by event' (the event shows itself briefly, i.e. a single earthquake), it takes immense time. Believe me, if global warming had taken control of Earth, the derecho in the Mid-Atlantic this past summer would have mowed down entire cities. Every severe thunderstorm event this past summer would have likely had extreme bouts of wind, hail, rain and tornadoes. But did that happen? No.

Superstorm Sandy was indeed a horrible storm, one that will not be easily forgotten in coming decades. However, global warming does not appear to be the culprit for such an event.

Andrew
By Andrew at 2:44 PM 4 comments: Links to this post 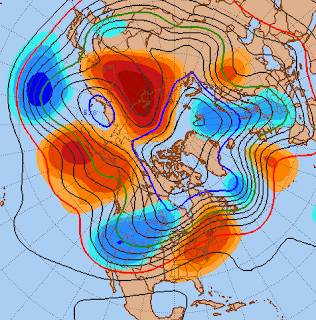 This is a Special Long Range Lookout, published November 4, 2012.

The dreaded Eastern US ridge pattern is showing up in the ensembles in the next 5-10 day timeframe. As a stormy pattern begins to shift westward into the Southwest and general Western US, and the environment around Greenland begins to become more stormy, a ridge of high pressure will be setting up across the eastern US in response to these two factors. The stormy West will be a negative Pacific-North American (PNA) pattern, which brings about a warmer pattern in the East. The stormy Greenland area will be a positive North Atlantic Oscillation (NAO), which helps a warming trend across the East. While this detrimental negative PNA will be quite strong, the positive NAO will be relatively weak, which means this won't be a locked-up warm pattern.

If this were winter, many in the East would be in some trouble. However, I can see that this is, in no way, the end of winter before its even started. Let's take a trip up to the Arctic. In the Arctic, we see a disorganized bunch of reds (high pressure) and blues (storm systems). This is good. If we have the ridges of high pressure holding their ground in the Arctic, it will ensure the prevention of a polar vortex forming. A polar vortex is the base of the Arctic Oscillation (AO), which is strong in the positive phase (cold air is locked up north, warm air prevails in the US) and weak in the negative phase (polar vortex breaks, cold air flows south).

Last winter, we had the polar vortex present and strong, which kept the cold air north in Canada and Alaska. Rarely did a ridge break in to that vortex that kicked cold air south. This fall, we have been observing a relatively quiet Arctic with the absence of the polar vortex, which is a good sign for this winter. While a ridge in the East may not be the best thing we want to see as we come in to the final days of fall, the absence of a polar vortex and the presence of at least one big ridge in the Arctic is certainly good news, and a welcome change from what we saw last winter.

In summary, the East is likely to see a few warm-ups in the next few weeks. However, the fact that the NAO will not be a strong positive and there is no polar vortex present is very good news in my eyes, especially the weakness of the positive NAO in the short term. If the +NAO remains weak, then the ridges in the East will be easily pushed off. Now, due to the strong negative PNA they will form again, but the ridge is unlikely to be sustained for longer than 3-6 days at a time thanks to the weak +NAO.

The people most likely to see snow in the next week or two will definitely be the Plains and Rockies, as the stormy pattern persists in that region.

Andrew
By Andrew at 9:41 AM 5 comments: Links to this post

What Are The Models Saying This Winter? Part 4

The fourth part of the model forecasts for this winter has been made for your viewing pleasure. Let's get into it.

These are precipitation anomalies (top) and temperature anomalies (bottom) for the winter period from the COLA model. I don't have much information to work with on this model, so let's just see what it says. The images to the right of each colored picture shows 'skill areas', or where the model is most confident in its forecasts where color is shown. Areas with no color indicate lower confidence. Precipitation forecasts from the COLA model show a dry West Coast and wet Southeast, typical of an El Nino. The skill map is favoring the wet Southeast idea, again signifying an emerging El Nino. Despite this, I find that the El Nino is still not cooperating with the atmosphere, which refuses to recognize the presence of an El Nino. In fact, more La Nina signs are shown across the globe than signals of an El Nino. For temperature, a warm Alaska and northern Canada is forecasted, while southern Canada and much of the Lower 48 are in well below normal areas. Despite such large bodies of cold and warm forecasts, the COLA model only puts investments in the northeastern Canada's and the Great Lakes warmth, with a bit of confidence in the Plains' cool down.
This does bode well with the GFDL's temperature forecast in the last part of the model displays for this winter. That said, my confidence in such an event happening rises. However, recent trends are showing a good cool down, followed by a strong warm-up. This could dramatically alter the average temperatures for the winter once things are all set and done.

This is the CCM3 model's precipitation (top) and temperature (bottom) forecasts for the winter months. As in the images above, the right-hand pictures are of skill maps, aka where the models are most confident in their forecasts. The CCM3 prefers a slightly dry West Coast and pretty dry Plains area for the winter, not handing out any above average precipitation anomalies. The skill maps include a dry West Coast, and that's about it. For temperatures, the CCM3 displays a cooler than normal West Coast and Alaskan area, while the Northeast and Ohio Valley regions are above normal. The skill map keeps the above normal Northeast in its sight.
I'm not supportive of this forecast. I haven't really looked in to how good this model actually is, but that's not the main point. The main point is that this model doesn't fall in place with the others, whether it be precipitation or temperature. This model keeps the Alaskan/Canadian regions very cold, which typically triggers a big warm-up across the East. However, this model keeps only a part of the nation warm. I don't like this forecast one bit.

Keep your eyes out for more 'What Are The Models Saying This Winter?' posts!


THE FOLLOWING MESSAGE IS TRANSMITTED AT THE REQUEST OF THE
KENTUCKY EMERGENCY MANAGEMENT AGENCY AND METROSAFE IN LOUISVILLE
KENTUCKY.

KENTUCKY EMERGENCY MANAGEMENT AGENCY AND LOUISVILLE METROSAFE ASK
THAT PEOPLE LIVING WITHIN A 1.2 MILE RADIUS OF DIXIE HIGHWAY AND
KATHERINE STATION ROAD CONTINUE THE EVACUATION UNTIL THE ALL CLEAR
IS GIVEN. THIS EVACUATION INCLUDES MOST LOCATIONS IN THE TOWN OF
WEST POINT KENTUCKY AS WELL AS PORTIONS OF SOUTHWESTERN JEFFERSON
COUNTY...WESTERN BULLITT COUNTY...AND NORTHERN HARDIN COUNTY. AN
EXPLOSION OCCURRED WEDNESDAY AFTERNOON AT THE TRAIN DERAILMENT
SITE AND A FIRE CONTINUES TO BURN. CREWS WILL BE WORKING
THROUGHOUT THE DAY ON SUNDAY TO CLEAN UP THE WRECK.

FOR MORE INFORMATION...GO TO WEATHER.GOV/LOUISVILLE AND CLICK ON
THE TOP NEWS ARTICLE.

By Andrew at 9:09 AM No comments: Links to this post