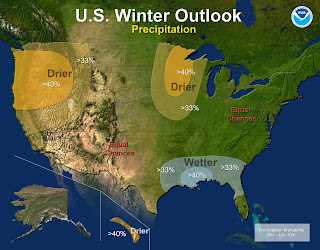 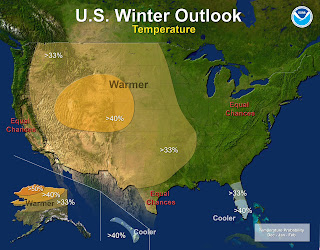 The long range prediction branch of the National Oceanic and Atmospheric Administration (NOAA), the Climate Prediction Center (CPC), released its winter outlook today. Upon analysis, I find it hard to correctly decipher.

The CPC did account for the lack of an El Nino, clearly stated in this quote from the article, which you can find here:


Forecasters with NOAA’s Climate Prediction Center say a wavering El Niño, expected to have developed by now, makes this year’s winter outlook less certain than previous years.
“This is one of the most challenging outlooks we’ve produced in recent years because El Niño decided not to show up as expected,” said Mike Halpert, deputy director of NOAA’s Climate Prediction Center. “In fact, it stalled out last month, leaving neutral conditions in place in the tropical Pacific.”

During a neutral ENSO winter, the subtropical jet stream is confined to the south while the Polar jet stream gives way and brings arctic air to the Northern US. These two jet streams merge in the Southeast, bringing a wetter than normal area to that region. The South in general is warmer than normal.

However, upon comparison to the typical Neutral ENSO winter and the NOAA forecast, the two are completely opposite. In fact, they are much closer to an El Nino solution, which dictates below normal precipitation in the Northwest and wet conditions along the Gulf Coast and East Coast. Temperatures do also partially resemble an east-based La Nina, which includes a warm West and cool East.

I have always been skeptical of the Climate Prediction Center- I find too many instances of above normal temperatures and/or 'Equal Chances' zones across the nation in their forecasts. Much like The Weather Channel, I have immense respect for the meteorologists at the CPC, but disagree with some of their content.

Personally, I find that there should be a cooler than normal section in the East, as the positive AMO will lead to increased instances of a -NAO/-AO (essential for cold weather in the East). You can find the rest of my winter thoughts at my Final Winter Forecast by clicking here.

Summed up, I disagree with the CPC's outlook. They seem too cautious and flip-flopping on what they want to do as for ENSO stages. Time will indeed tell, but I'm just a bit too skeptical for this forecast.

Models are indicating very long range snow potentials, which can be a precursor to a possible snow event in the future.

While long range forecasts rarely verify, they can offer hints on what eventually happens. For example, if a model were to show a massive hurricane devastating New York 2 weeks out, you wouldn't believe it. Neither would I. However, things like that alert forecasters to keep a general eye out on that timeframe for some form of tropical activity in the general Atlantic Ocean.

If we apply that rule to this situation, I can see the potential for a snow possibility as a massive cool down is predicted about 2 weeks out. I choose to believe the long range cool down theory as the ensembles are trending with it, something taken much more seriously than a single model's forecast.

In short, I could see some part of the nation getting a little of the white stuff. I doubt it will be significant, and probably would hit farther north. Either way, exciting times appear ahead for the central and eastern US!

Andrew
By Andrew at 4:17 PM No comments:

A body of blowing dust is progressing across the southern Plains at this hour on the edge of a very strong extratropical system in the Midwest.

Satellite imagery shows a swath of blowing dust currently hitting the Plains states, with Kansas and Oklahoma getting the worst of the dust. Many people underestimate the issues blowing dust can cause, so let's review what problems can arise from blowing dust, as small as some may be.

•Asthma is aggravated.
•Elderly people an children's respiratory systems may struggle to handle the foreign contaminants (dust particles)
•Damage to machinery that takes in air from the atmosphere- dust can enter the machine and cause it to malfunction.

All people are advised to stay inside, no matter your presence or lack of medical conditions related to the respiratory system until this passes by, which could take several hours.

This is the MSLP forecast from the 6z GFS at hour 384- the longest this model goes to. That's roughly 14+ days out. What you are seeing is a pair of tropical cyclones going down two different paths. The one on the left would most likely take a path similar to Isaac, while the one on the right would go out to sea. While this forecast has the slimmest of chances to verify, the idea that this is even a possibility to the GFS is quite alarming. In today's Tropical Corner, we'll investigate why a late season tropical burst of activity is possible. 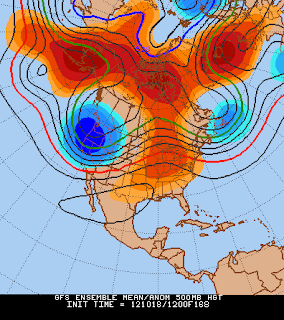 This is the 500mb height anomaly chart for hour 168, meaning this forecast is valid 168 hours from now. The GFS Ensembles that made this chart are showing a deep trough in the West and a strong ridge in the East, typical of a strong negative PNA pattern. It is common for tropical systems to gain an advantage when a pattern like this is present, as the ridge in the East diverts the jet stream north. Because the jet stream is diverted north, the upper level winds in the Atlantic are fairly low, enabling thunderstorms to strengthen and thus enhance potential for tropical cyclone formation.

I find a few problems with the GFS solution, and even the ECMWF, which is also showing tropical troubles by the end of the next 10 days. This ridge should die off by the time 8 days is up from now. After that 8 days, the negative PNA pattern will collapse and the trough will progress east into the central and eastern parts of the nation. This trough's movement east will push the jet stream south and thus drop tropical cyclone formation potential over the Caribbean and Atlantic areas. The timing is not matching up.

Andrew
By Andrew at 4:02 PM No comments: