I'm expecting the end of April and beginning of May to have seasonal to above-normal warmth across much of the country.

Shown above is the 500mb height anomaly pressure forecast over the West Pacific for April 26th. In this image, we see a strong ridge of high pressure stationed over Japan and East Asia, permitting the flow of above normal temperatures into the area. This event has significant implications on our weather here in the US. There is a rule, well explained by Joe Renken, that states a weather phenomenon in East Asia will be reciprocated in the United States 6-10 days later. This means that if there is a storm system in Japan on a certain day, we can expect a storm in the US 6-10 days after that. The same goes for high pressure and warm weather. So, if we use that rule, we can expect warmth over the United States around the May 1-5 period, if not for a longer time period than that.

The factors for warmth don't stop there- it goes far deeper, literally and metaphorically. 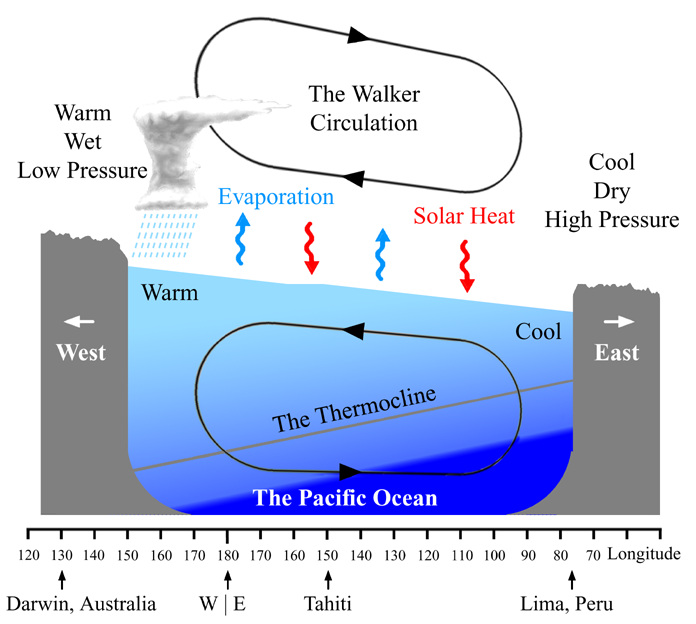 The image above may look complicated, but isn't that complex when explained thoroughly. Shown above is a graphical representation of a phenomenon called the Walker Circulation, also known as the Walker Cell. The Walker Circulation is most prominent in a La Nina situation, and forms when you have cool waters towards the Eastern Pacific, and warm waters near Oceania and Australia. The trade winds across the Pacific go from east to west in the Walker Circulation on the surface, due to the presence of high pressure in the East Pacific and low pressure in the West Pacific (think of it like a ball rolling downhill from the top of the hill (high pressure in the east Pacific) to the bottom of the hill (low pressure in the West Pacific), where the ball signifies the trade winds). When the trade winds reach the low pressure area in the western Pacific, the winds converge and begin pushing up into the atmosphere, creating thunderstorms. The air from the thunderstorms shoots up to roughly the 250mb to 200mb level before the winds spread out, as the air cannot rise further. From there, the air at 200mb flows from west-to-east, opposite the direction of the surface winds. Then, the high pressure and cool/dry atmosphere in the East Pacific pulls that air down back to the surface to start the whole process over again. As I said, this typically appears in La Nina situations, as cool waters in the East Pacific that are required for the Walker Circulation typically arise in conjunction with the La Nina.

The image above shows a view of surface pressure and surface wind vectors across the tropical regions of the world. We can use this image to identify the presence, or lack thereof, of the Walker Circulation. Taking a glance at surface pressures and winds from April 6th to April 10th, we do see surface winds flowing from east-to-west, a trait typically observed with the Walker Cell, and the low pressure center in Oceania also shows a characteristic of that circulation. This is rather odd, as we have been expecting an El Nino to arise, but the Walker Cell appearance here tells me that the El Nino has not hit the atmosphere yet, though it may start appearing in the surface temperatures. In recent days, the surface winds have been showing signs of weakening, indicating that the Walker Circulation may be weakening, which would herald the arrival of an El Nino if the winds reverse to a west-to-east stature. 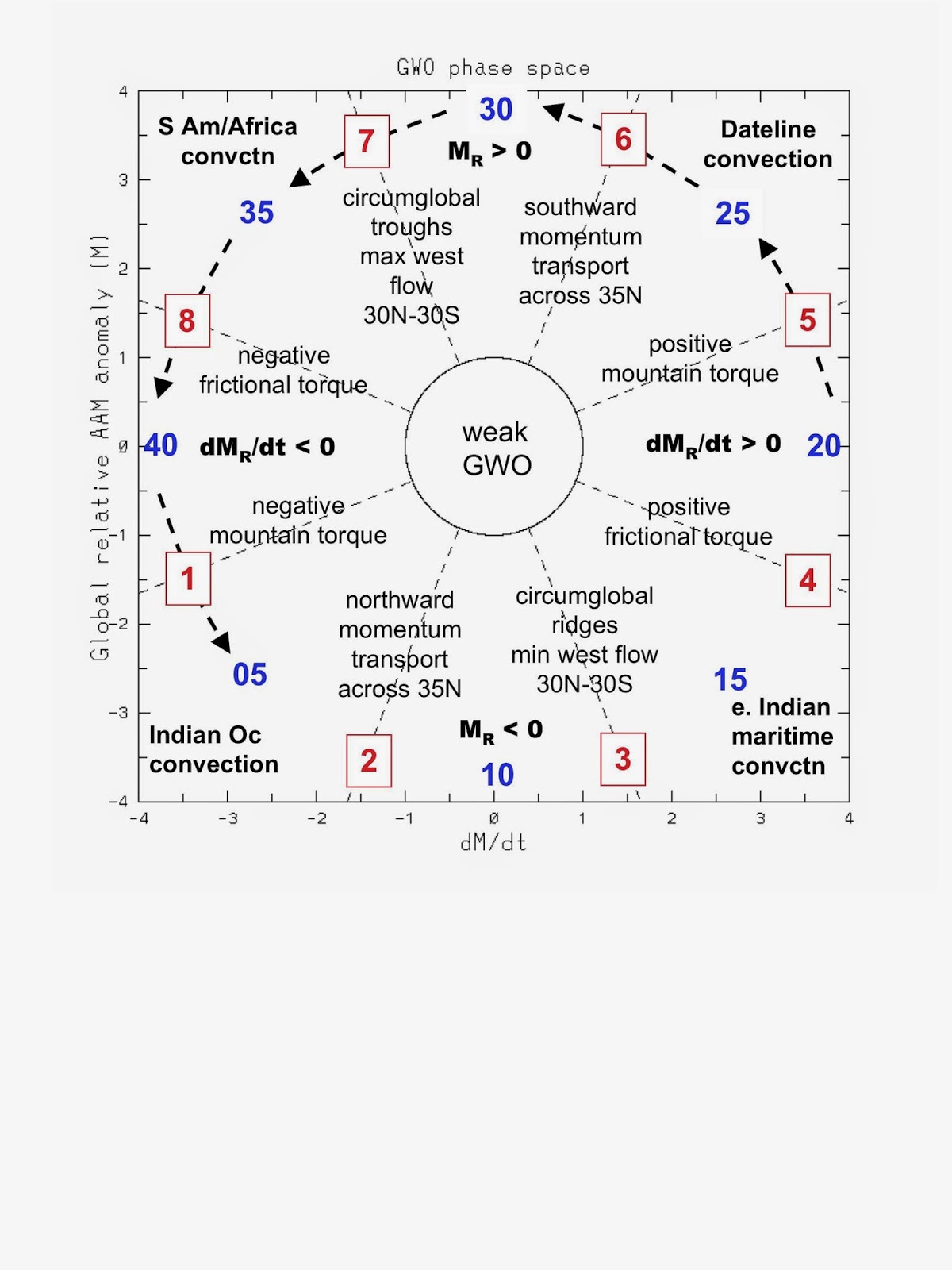 This image here actually is pretty complicated, but I'll do my best to explain it. This graphic shows the layout of the Global Wind Oscillation (GWO), and what factors indicate the presence of the GWO in one of a possible eight phases. For example, if the GWO is to be in Phase 1, we would look out for negative mountain torque (MT) values, as well as enhanced tropical convection in the Indian Ocean. An additional description of the GWO comes from the ESRL, as shown in the screenshot below.

I outlined the Stage 1 description, as not only does it fit in with the current conditions that we're experiencing, but it is indicative of a La Nina, like we talked about earlier in this post. How do we know for sure that we're in the Phases 1-3 of the GWO (which are traditionally La Nina-esque phases)? Let's take a look at the indicators that depict Phases 1 through 3 of the GWO.


If we look at the first GWO image we discussed, as well as the screenshot description of the GWO, we can see what defines these key phases. We see that negative mountain torque and convection in the Indian Ocean is a key definition of these first three GWO phases. Looking at that observed MT chart shown above, we see that the net MT is now below average, as the black solid line shows. While the convection in the Pacific is more displaced in Oceania instead of the Indian Ocean, the description highlights that the relative AAM is negative, and that relative AAM image above shows a negative anomaly. Overall, this does indicate the La Nina phases, also known as GWO phases 1-3, strengthening that correlation image, as well as the Walker Circulation discussion. Additionally, in the same sense that positive East Asian mountain torque can lead to cooler than normal temperatures in the US, the current negative East Asian mountain torque anomaly in the graphic above (red line two images above) indicates warm weather is more likely.

Importantly, in that screenshot description image, we see that the La Nina-like stages indicate a trough in the Western US. Typically, when we see a trough/stormy weather in the West US, we get a consequential ridge of high pressure in the East US, which is a textbook negative PNA pattern. 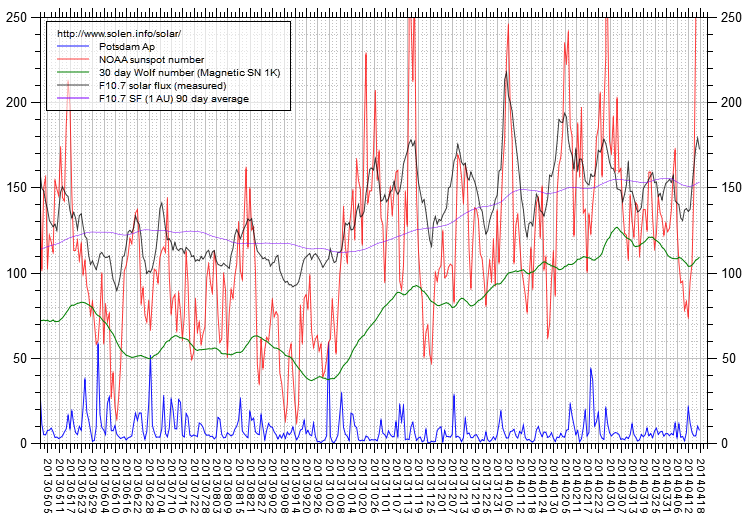 The image above shows observed sunspots in accordance with the 30-day sunspot cycle. As I've mentioned on this blog before, there is a known inverse correlation between the 30-day sunspot cycle and the Pacific-North American index (PNA). When the 30 day sunspot number is anomalously high, we tend to see the PNA in its negative phase. In the same sense, when the 30 day sunspot number is anomalously low, the PNA tends to reside more in its positive phase. Composite images of both the positive PNA and negative PNA are shown above, courtesy of NCSU.


If we look back at the sunspot image, we see that the 30 day sunspot cycle is just off the charts, indicating a very high number of sunspots, or at the very least, elevated solar activity. If we use our solar correlation with the PNA, we may be expecting the emergence of a negative PNA regime in the near future. If we look at the composite image above for a negative PNA, we see that warm weather tends to prevail in that sort of situation. This fits in well with the GWO description we went over earlier, the presence of the La Nina Walker Circulation, and the East Asian correlation tool.

The last piece to the puzzle is the presence of enhanced tropical convection over Oceania.

If we consider that the current center of the tropical convection is around the 165 East longitude line or 170 East line, we can see which MJO phase is best represented here. It looks like the MJO is currently in Phase 6 or 7, as the line on the 165 East shows splitting through the two panels on the right that are circled.

What does a Phase 6 MJO mean in the month of April?

The Phase 6 MJO looks like a typical negative PNA regime, with low pressure anomalies along the West Coast, and strong high pressure/warm weather in the Central and East US. This supports the overall warm weather idea, only adding to the rest of the factors supporting a warm weather regime in the late April and early May timeframes.

Let's summarize all of this.

• Based on a number of factors, warmer than normal weather is expected for the latter part of April, potentially well into the beginning of May.