Ramblings of a Changing Pattern

The atmospheric pattern will be undergoing a shift in coming days, and this will result in a shift in temperatures as well. Let's take a look at what will be happening. 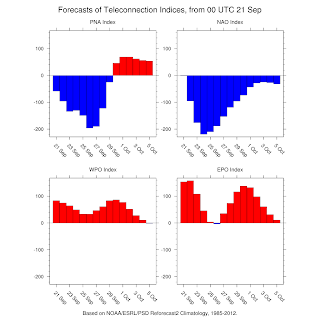 The teleconnection (various atmospheric oscillations that occur over different areas of the globe) diagnosis over the next two or so weeks does support the idea of at least a modest shift in the pattern over the northern Hemisphere. We start with the PNA index forecast on the top left panel, which is projected to spike positive by the start of October.  A positive PNA results from high pressure formation in the Western US, and related low pressure formation over the East. That said, the upstream pattern from the East would suggest summer is quickly losing steam. That's not to say we won't see a resurgence in summer-like temperatures down the road, but for the near-term, it's looking less likely. The top right panel shows the North Atlantic Oscillation (NAO) rising from deep negative values to a weaker (but still negative) position. At the end of the forecast, we see re-strengthening of the negative NAO occurring. Considering we are bound to see elongated high pressure in North America as a result of the positive PNA, it's not out of the question that the elongated high pressure may spill north towards eastern Canada.

The bottom two panels show the West Pacific Oscillation and East Pacific Oscillation forecasts on the left and right, respectively. These two indexes are closely related, as both originate from the Pacific. We see a mainly positive WPO throughout the forecast period before weakening to a neutral phase occurs. It's probable we see a more negative WPO forecast in coming days, as high pressure takes over the western coast of the US into Canada, going against the typical +WPO regime of negative height anomalies across the upper Pacific. The EPO will see a roller-coaster of positive to neutral to positive again to neutral again over the next couple of weeks. The shifting height anomalies across the northeast Pacific will be to blame, as the PNA fights for control. Don't be surprised to see periods of a -EPO play out; the -EPO helps out with cold weather prospects for much of the eastern half of Canada and the US.

By Hour 360, the +EPO is defeated and a +PNA controls the situation to bring steep negative height anomalies to the Central and East US. A slight -NAO also helps out.

With Typhoon Usagi and newly-formed Pabuk swirling in the Pacific, it's evident we will see some stormy times ahead in North America. As Usagi and Pabuk go throughout their lives, in addition to the formation of multiple powerful storms in the Bering Sea (see image below), it is not unlikely we see very cold weather hitting the Central and East US behind a cold front or two, depending on where the energy hits in North America. The East Coast should be on the lookout for a strong storm system in the next 2-4 weeks as a result of this stormy Pacific pattern. A continuation of the projected -NAO may lead to a coastal storm set-up, but anything beyond that is mere speculation.

Andrew
By Andrew at 4:04 PM No comments: Links to this post

This post contains the updated snowfall map for the winter of 2013-2014. The graphic shown reflects the areas where the strongest storms may hit. It should be noted that while it is not shown, the Ohio Valley is still in line for an above-average snowfall tally this winter.

Each winter, everyone wants to know if they'll get 'The Big One'- the winter storm that defines the season and brings enormous amounts of snow to wherever it hits. For lack of a better and more simply-defined term, we address that as a blizzard in this post. For this winter, it appears the Plains and Midwest will be at the highest risk for a significant winter storm. 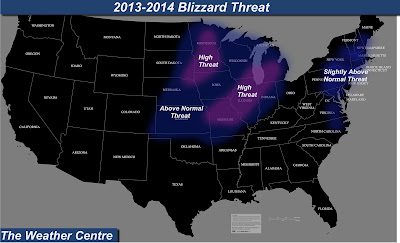 Among the cities included in my forecast are Chicago, Minneapolis, and St. Louis. I placed these cities under the 'High' risk for a blizzard, due to the likelihood we will see ridging in the Southeast develop. This will help to push storm systems north, and depending on how far north they go, heavy snowfalls could very well hit those in the pink area.

In the blue, I placed Wichita, Des Moines, and Rhinelander under an 'Above Normal Threat' outlook. This is mainly due to the same reasons I described above, but I feel that a lack of confidence prohibits me from upgrading these areas. Don't get me wrong here, this is not nearly set in stone and will change, but right now, I'm just a bit more cautious with those in the blue due to their uncertainty on where storms will actually go when they are pushed north and into the Plains/Midwest.

I highlighted the East Coast on the likely event that they see coastal storms this winter, but the threat is not extraordinarily high due to the possibility Southeast ridging prohibits a lot of coastal storms from heading up into the Northeast.

Andrew
By Andrew at 1:45 PM 2 comments: Links to this post