A tropical system forecast to hug the East Coast could put out over 2 inches of rain in many places in the next 5 days.

Temperatures for tomorrow, October 9 are warm across the Midwest. Temperatures are forecast to reach the 80s as the skies will remain sunny but breezy out ahead of the advancing cold front currently draped across the central US as of 11 pm CDT October 8. However, in areas of Texas northwards into North Dakota will cool down as the cold front takes effect on temperatures.
By Andrew at 11:08 PM No comments: Links to this post

Recent satellite, radar and pressure maps indicate some heavy showers and thunderstorms are ongoing across Texas. These heavy storms are associated to a cold front extending across the middle of the US. There are also some showers from Oklahoma north into North Dakota, showing just how long this front is. The front is also marked by 24 hour temperature differences below. 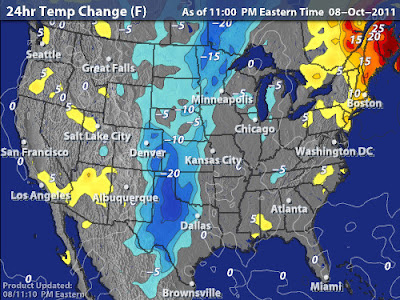 24 hour temperatures indicate there has been over a 20 degree temperature drop in North Texas, signifying how strong this front is.
By Andrew at 10:55 PM No comments: Links to this post 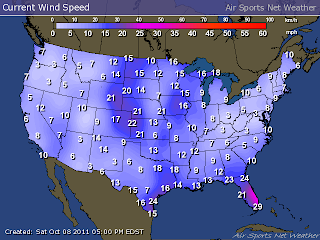 The Plains and Midwest regions are experiencing some pretty windy episodes right now. This current sustained wind speed map indicates that winds are surpassing 22 MPH in Kansas, while surpassing 30 MPH down in Florida! This wind will continue as an advancing cold front marches across the US and eventually will cover the entire area with a cooler air mass.
By Andrew at 4:12 PM No comments: Links to this post

As of October 8th, the current La Nina is central-based, meaning the coolest temperatures are in the middle of the ENSO monitoring regions. Below is an image of where the ENSO Monitoring regions are.

Putting that together with the current SST (Sea Surface Temperature) Anomalies leads to the conclusion of a central based La Nina with maybe some western-based support. What does this mean right now? Little, if anything. The Nina will continue to change as we work our way into winter. What does this mean for our winter forecast? Nothing- there may have to be some adjustments on the final forecast in Mid-November, but right now we do not feel anything needs to be changed.
By Andrew at 4:06 PM No comments: Links to this post

Email ThisBlogThis!Share to TwitterShare to FacebookShare to Pinterest
Related: 2011-2012 Winter Forecast
We will not be near the computer for a while more. Our sincerest apologies.
By Andrew at 1:50 PM No comments: Links to this post

Water temperatures in the Caribbean remain very warm as well as waters in the Gulf of Mexico. There's been very little activity in those regions, so the question is- when will some activity start to happen?
The answer: If it happens, it will be soon. The waters are very warm, so any potential development will happen in the Caribbean. We are just waiting to see a prime system to come in that may cause problems. If it does not happen soon, the waters will cool down once again and tropical season will not be a big one for the regions in question.
By Andrew at 9:16 AM No comments: Links to this post

This latest 0z suite of models has formed a good consensus in the possibility and likelihood that this storm will stay just off the coast of the US. In the image above we did create a preferred track for this storm as well as a cone of possibility. This cone of possibility is where the storm could go, but at this point in time we believe this cone will be the areas that could get hit with effects from the storm.
The 0z model consensus also sent out a clear message- this storm will likely remain weak. We here at The Weather Centre agree on this concept, since the storm will not be forming in the still warm waters of the Caribbean/Gulf of Mexico. Soon after development, this system will be moving northward into cooler waters, so anything above a strong tropical storm is unlikely. I could see up to a moderate tropical storm as the highest threat within the realm of possibility.
By Andrew at 8:16 AM No comments: Links to this post