A La Nina has officially been declared, and here's what's going down.

-Coldest temperatures APPEAR to be in western areas.
-CFS model says this La Nina could be stronger. 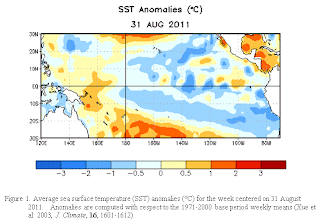 GFDL Hurricane Model has Maria Close in on Florida, Landfall Likely in this scenario 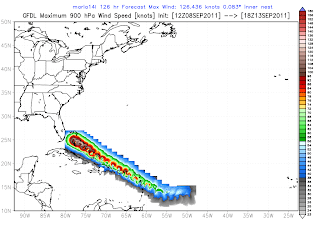 The latest GFDL has Maria travel NW, dance around the islands before likely making landfall on Florida as at least a hurricane. As of right now, it appears Maria may degenerate into a tropical wave but restrengthen, and here's why.
Maria is currently a weak tropical storm. She does not have a defined circulation, which I am anticipating a RECON aircraft will confirm tonight. She has a patch of clouds in her center (figure 1), which you can see is exposed from the main convection to the north of Maria (figure 2) with center roughly drawn in.

Maria isn't in an environment favorable for development, and several models are not calling for any strengthening. Below, in Figure 3, you see Maria with a superimposed image of current wind shear in knots. Figure 4 is the official NHC track right now.

GFS Rams TS Nate into New Orleans as a hurricane

The GFS's latest run has put New Orleans in an unfavorable position as the model throws Nate towards the city. This is your morning TS Nate Update. Here is a GFS image of forecast surface wind speeds.

Nate is being smashed into the Gulf coast with winds possibly exceeding 40 knots. With a defined eye in this image and all the other images, it would be logical to indicate that Nate will likely become a hurricane in any situation. The only thing to watch is the track. Here's another image from the GFS with MSLP.

This image looks to be more suitable for hurricanes. The GFS shows a portion of Nate in light red, which is shown on the legend as over 64 knots of wind speed. MSLP indicates a low pressure of 992 millibars, which is a fairly good strength for a tropical storm or low end category 1 hurricane.
Here is the NHC's track, then spaghetti models.

The consensus does appear to be towards Mexico, which is where I will point to as well, but I am leaving the door open for a potential threat to Louisiana and/or the entire Gulf Coast.
By Andrew at 7:07 AM No comments: