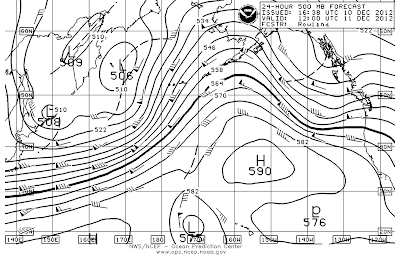 (Originally posted December 10th) Above, we see the 24 hour forecast from the Ocean Prediction Center (OPC), the oceanic branch of the National Oceanic and Atmospheric Administration (NOAA). This chart depicts 500 millibar forecasts, with depressions and 'L' signs in the image characterizing low pressure areas, and arcs and/or the letter 'H' signifying high pressure areas. In this forecast, we see not one, not two but THREE separate storm systems in the western Bering Sea. (If you want to get technical about it, there is only one, but eventually the other two will find their way in there.)

This forecast map is valid December 11. If we take that date out 18-21 days, we end up with a timeframe of December 29-January 1: Right in the middle of holiday traffic, potentially right on New Year's Day. If this rule (called the Bering Sea Rule) is put into effect here, and these three storms follow said rule, we could see quite a stormy period in the days leading up to New Year's Day.

(The following is new information)

The above is a 500mb map from November 8th, 2012. On November 8th, a strong storm system was in the immediate vicinity of New England, and high pressure was stationed over the Central US, with another low pressure (LP) system on the West Coast, similar to a negative PNA pattern.

The reason why I bring this up is simple: This is the best forecasting tool we have at the moment. This is the Lezak Recurring Cycle (LRC) in action. Using a 53 day cycle time developed by the folks at AccuWeather Forums, I traced December 31st to November 8th. Considering the Bering Sea is in agreement at this stage, and to see a strong LP system in the Northeast in the 53 day timeframe is greatly enhancing my optimism for a big New Year's Day storm.

Now, the atmospheric pattern is not precisely the same every cycle of the LRC- the storm track will change, meaning it may not end up in the Northeast. It could hit the Plains as a very weak storm. I doubt the idea of a weak storm as the Bering Sea is onboard here, but yes, any region of the Lower 48 is still in the target range; the Northeast just has a slight advantage.

Stormy Pattern Could Solidify, Watch For Cooling Trend Towards January

I think now is the time to seriously sit down and address what's likely to happen with the atmosphere in coming weeks and into the end of Dec.

I'd like to start off with the potential for slightly cooler temperatures emerging over the nation. Above is a chart of observed 70mb stratospheric temperatures from 2011 and 2012. The dashed green line is the average stratospheric temperature for that time of the year. Let's take a look on the right side of this chart, where the newest observations are in. See that spike in temperatures? That was a recent stratospheric warming event, known as a significant stratospheric warming event (SSW). An SSW shows that warm air has penetrated into this layer of the atmosphere, and is rapidly increasing the temperature, key word being rapidly, hence the 'sudden' in sudden stratospheric warming. I have learned that there is roughly a 10 day gap between an SSW and observed cold weather at the surface. Considering this cold air must push through several hundred millibars (several thousand feet) in the atmosphere, such a gap is not surprising. If we estimate that this SSW happened a few days ago (we'll say Dec. 8-10), one would expect a trend towards colder weather to occur near the 18th-20th. It is possible that this cold air arrives shortly after the departure of a potentially significant winter storm during this time period, but more forecasts are needed to confirm this.

Adding to the potential for a cooling trend towards January is the raggedness of the polar vortex. The top image shows pressure and temperature forecasts from the ECMWF model at 1 millibar- the highest integer you can get in the stratosphere. The bottom image is the same pressure and temperature forecast in the 100mb layer, considered the end of the stratosphere and the beginning of the troposphere. If you look closely at these images, you can see big capital 'L' symbols. That marks the position of the lowest pressure readings in that area, a.k.a. the Polar Vortex (PV). If you try to match up the two 'L's in these two images, you'll find that they are not near each other. This is equivalent to an uneven Jenga tower- the bottom blocks are more populous on one side, and the top blocks are plentiful on another side. If you play Jenga, you know that such a recipe spells a very unstable tower. In a similar sense, such a mismatched polar vortex means that the cold air that the PV holds onto is more able to be released south. If such a mismatched PV goes on for some more time, we could see a complete collapse of the vortex altogether, leading to frigid air across the board, but that's for another time.
Continuing to analyze the 100mb layer of the stratosphere, check out the light orange colors over North America. This means that the stratosphere is warm in that area. As we know, a warm stratosphere forces cold air south. If cold air is able to propagate south from the lower stratosphere, I see it more than plausible for a cold air mass to settle over Canada. The North Plains and Upper Midwest could also be involved. If a good storm system were to come along and hold onto some of that cold air, I see it possible for a sharp temperature crash in the North half of the US as a result of the warming of the stratosphere. If you are wondering how this could all perfectly happen, just ask Russia and Europe: They're experiencing a warm stratopshere, and currently suffering from extreme cold.

This is the Madden-Julian Oscillation (MJO) forecast from the ECMWF Ensembles. We can see that the forecast calls for the MJO moving into a weak Phase 1. Typically, such a phase is supportive of deep cold over the nation, but the negative PNA says otherwise (we will discuss this next). Anyhow, the lack of strength in this Phase 1 is not reassuring, I believe that the MJO will have little effect on the weather for some time, especially in part thanks to the negative PNA, which we will now discuss.

A mixed blessing. A double-edged sword. Only a few of the terms used to describe the negative PNA. On one hand, the negative phase of the Pacific North American index leads to storms in the West, which can then transfer energy across the Rockies and into the East. On the other hand, a depressed height anomalies in the West also translate into raised height anomalies in the East in a typical equal-and-opposite-reaction example. Today's 12z suite of models and ensembles reaffirms my thoughts of the negative PNA sitting in place for a while, but a positive PNA could emerge later on. But this time, many may not want to see this factor switch back to positive. The negative PNA looks to be composed of multiple strong pieces of energy that are pushing into the West Coast. As this happens, they swing into the Southwest and through the South Plains, and, depending on other atmospheric factors, can go into the Plains, Midwest and East Coast. The negative PNA tends to divert storm tracks into the Plains and down through the Gulf Coast, hence the recent snowstorms in the Upper Midwest/North Plains. But the latter storm track will be falling into place soon. As we see some pieces of energy start to follow that Gulf Coast track, a negative NAO will pick it up and try (most likely succeed) in picking up the storms, shooting them up the coast, and bombing out into the (in)famous Nor'easter.

12z models and ensembles forecasting the NAO show a good consensus with a weak negative NAO eventually pushing into a moderate negative NAO before some signs of a backtrack into a weak negative NAO occur. Note the GFS ENS/GFS/GGEM ENS showing the NAO trending into neutral territory. Before you get upset, New Englanders, this will also be the time when the PNA may go positive, so that Gulf Coast track wouldn't be present anyhow.

Let's take a step back and regroup all of this information. We have the PNA going negative, which will incite pieces of energy moving into the Gulf Coast. We have a negative NAO that will then take these pieces of energy and move them up the coast. The tendency for a west-based negative NAO will then amplify these storms. Adding to the mix, the idea of a storm taking a quick detour north from the Southeast results in a trend towards a more meridional flow for the region, something that enhances the storm system and thus the precipitation. An example of this meridional flow is shown below:

Something else intriguing me is the sudden crash of the Southern Oscillation Index (SOI). You avid weather followers may know it as a predictor of the El Nino or La Nina, but it serves another purpose- showing Kelvin Waves.

The most recently taken observation of both observed underwater values and anomaly underwater values are shown above, with depth of the water on the left and location on the bottom. If you look in the upper left corner of the anomaly chart, you can see a blob of orange and yellow. The placement of this swath at 100m-150m underwater, as well as its tendency to be longer than taller, tells me that this is a Kelvin Wave. A Kelvin Wave is a warm body of water that moves along the equatorial Pacific between 50m-200m, and shows up as a blob of red. The presence of a Kelvin Wave forces the waters to warm, and warm waters means rising air (a.k.a. convection). This enhanced rising air as a result of the warm Kelvin Wave waters blows the bottom out of the SOI, hence why we have seen the index crash in daily observed values below.

As I have recently learned, when this SOI crashes, the pattern then will try to regulate itself by enhancing cold weather over the North Hemisphere. And why, you ask? Because, as the warm air shoots into the atmosphere from the Kelvin Wave, the polar vortex is affected. Much like the SSW, the polar vortex is injected with warmer air, and the vortex weakens, releasing cold air south, possibly into the Lower 48. Now, I wouldn't nearly place all my money on this, considering the Kelvin Wave/SOI is one in dozens and dozens of atmospheric factors, but such an event could have interesting implications as we move towards January.

Well, there you have it folks. The pattern is looking stormier and cooler as we move through December and into January. As soon as the October correlation in Siberia cooperates, Jan/Feb are looking even chillier than all of this could do. Exciting times ahead.

I would like to thank the Severe Weather Centre, a fantastic weather blog not unlike mine, and the AccuWeather Forums for detailing some information used here.

Andrew
By Andrew at 7:19 PM 6 comments: Links to this post