**This post is dedicated to those who lost their lives in the tragic massacre in Connecticut. All information below is typed and published in honor of the children and teachers killed in this horrible event.**

The European ECMWF model (left) and American GFS model (right) have come into good agreement on a much more favorable pattern for the nation for the last part of December.

The image above is composed of these two models' 8-10 day 500mb height anomaly forecasts. In areas of blue, a stormier pattern is likely to develop. Oranges and reds indicate a warmer and quieter pattern should develop. This is the pattern in the few days before Christmas.

Also intriguing is the ECMWF's push for a slight positive PNA, as the persistent low pressure pattern causing our current, unfavorable negative Pacific-North American (PNA) index phase moves further offshore. The development of low pressure in the East forces high pressure to tend to develop in the Rockies, and suddenly we have the Pacific working in our favor. I would say to watch out for that deep high pressure system in the north Pacific, but if a piece of the polar vortex sticks itself in the Bering Sea, we don't have much to be concerned about in that aspect.

Speaking of the Polar Vortex (PV), notice how we see no strong low pressure anomalies in the Arctic. That's GOOD! What that means is the polar vortex is weak, and when you have a weak polar vortex, you have cold air trying to make a push south. If it were to move south, I have a good feeling it would enter the North Plains and get pulled south as a strong storm system makes its way across the central and east parts of the nation.

Lastly, and one of the more important items of interest is the intense meridional flow we will see if this solution evolves as forecasted by the ECMWF. Meridional flow, for those of you unfamiliar with the term is when the jet stream aligns in a more north-south pattern, rather than just west-east. When you have storms moving through areas of meridional flow, the spin in the energy, called vorticity, is enhanced. As a result, the storm system is strengthened. Ever wondered why storms are enhanced in negative NAO situations? Now you know.

In conclusion, the models seem to be latching onto a much better pattern (especially in the Pacific) for the last week or two of December. This favorable pattern could very well lead into January, where additional chances of more sustained cold are likely to be found. The areas that could be most affected by the new pattern include the Northeast first and foremost, with the Ohio Valley/Midwest/Plains likely to feel the effects as well.

Notice how I didn't mention the GFS here? It's because the GFS has been wobbling recently, and, when in doubt, seek comfort with those you trust (in my case, the ECMWF).

**This post is dedicated to those who lost their lives in the tragic massacre in Connecticut. All information below is typed and published in honor of the children and teachers killed in this horrible event.**

The new models have come in for a December 20-23 potential significant winter storm. Let's get into it. 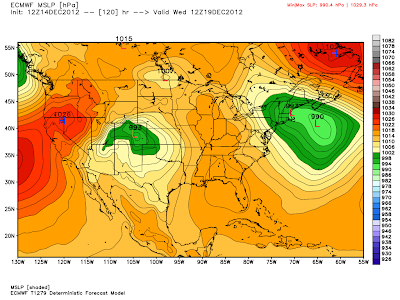 We start with the European weather service's ECMWF model. This is a forecast for December 19th, and we see two things happening here: a pair of storm systems in New England, as well as a low pressure system beginning to emerge from the Rocky Mountains. Our system is that one emerging from the Rockies, with a central pressure of 993 millibars, meaning it is a fairly strong storm. Let's hone in on the atmospheric set up at this point. We see that dual storm system departing, as well as a weak high pressure system in the Southeast. A high pressure system is also shown in the West US. Not really anything significant to note at this time other than a progressive negative PNA pattern showing up, something likely to change as this system moves east. 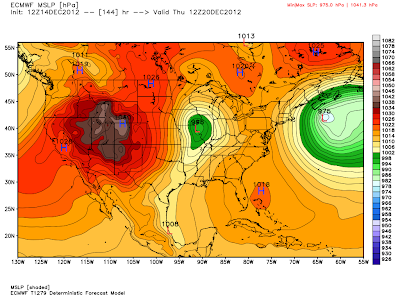 24 hours later, we see our system has now moved into the Midwest, pushed in that direction by the Southeast ridge being shown to the east of Florida. We now see a high pressure system in the West US and the Rockies. Note the compact-ness of the low pressure system in the Midwest- that means our system is small but strong, as the central minimum pressure is at 996 millibars. Now, I don't trust the ECMWF path at the moment, and I'll tell you why. The pattern that was ongoing when this system emerged from the Rockies was a negative PNA, meaning that the system goes into the Plains or into the Deep South. Now, the system emerged from the Rockies, and we see the ECMWF project it moving into the Midwest as seeing the image above. As this system moves into this region, it's likely we will see a positive PNA set up, something I will discuss later on. 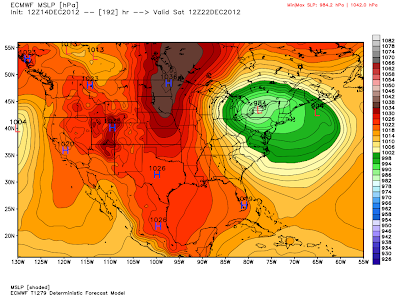 Now, on the morning of December 22nd, we see our system has shifted into the Northeast, with a minimum pressure nearing 980 millibars. Check out that incredible pressure gradient in the Midwest. The closer those lines (isobars) are together, the stronger the surface winds will be. If that's any indication of what we could see, December 22nd could be a very windy day if the ECMWF pans out. 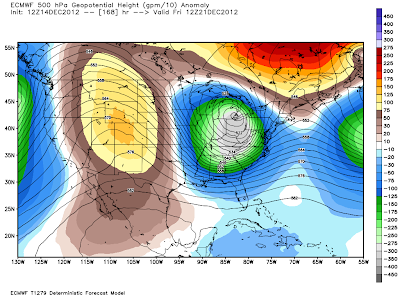 Here's what I think will be crucial in determining if the ECMWF will work. As I said above, the system will leave the Rockies in the midst of a brief PNA phase change, from negative to positive. Above is the ECMWF's 500mb height anomaly forecast for the morning of December 21st (Oddly enough, the day the world is predicted to end). We can see the storm system in the Ohio Valley, but take a closer look at the ridge in the Rockies. That is a positive PNA, people! Such a positive PNA, combined with the presence of a Southeast ridge presents us with the general idea that a Midwest/Ohio Valley hit is "likely", but only if the pattern works out as the ECMWF is predicting it to.

Before we move on to the GFS model, the ECMWF did show some snowfall in the WI/MI regions from this system, on the order of several inches at most. 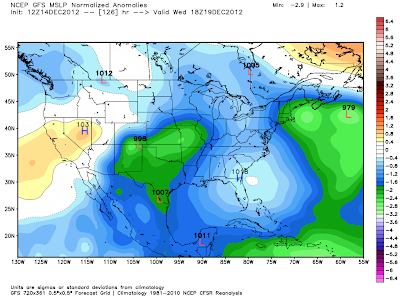 This is the American weather service's GFS model, a forecasting model that is always in a tight race with the ECMWF to see which is better. Historically, the ECMWF has a better forecasting record, but the GFS has been catching up recently. Above, we see the December 19th afternoon forecast of sea level pressure (SLP) anomalies. The cool colors show lowered pressures (indicative of a storm system), and warmer colors show raised pressures, which typically show a quieter pattern. This forecast from the GFS shows our storm system in the Midwest at this time. Our Southeast ridge is present, meaning the East Coast isn't so likely to see this storm. Note the timing differences between the GFS and ECMWF for when the storm system moves into the Plains- this GFS forecast is for the afternoon of Dec. 19, and the ECMWF is for the morning of December 20th. As small as 12 hours' difference may seem, I can tell you firsthand that such a difference can bring about severe track changes. 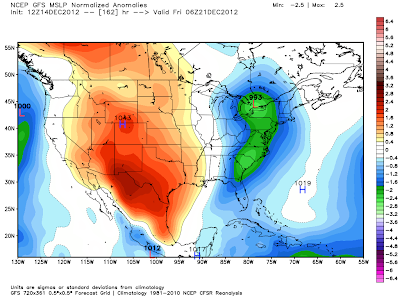 Moving into the early morning of December 21st, we see the storm system has now entered the East Great Lakes with a minimum pressure 993 millibars. Also note the storm system in the Southeast that is likely to swing up the coast. As this storm system moves into the Great Lakes, if the GFS verifies, we could see a nasty cold outbreak across the Plains, Midwest, Great Lakes and Ohio Valley if cold air is indeed available. That's not a guarantee, but something could come out of this. 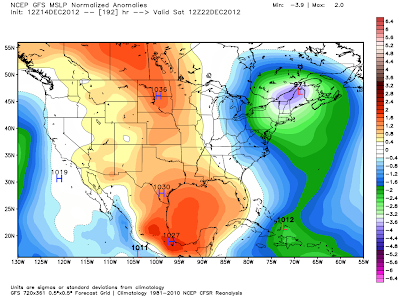 Here's the thing that really shocks me, but not in the way you think. On the morning of December 22nd, we see our storm system has now bombed out to 971 millibars- a very strong storm system for an on-land system. This is what shocks me: the nature that this storm system takes. We see it move into the Northeast, but suddenly stop moving and retrograde (move west in the North Hemisphere) slightly, essentially staying put. If such an event happened, we could see significant cold and snow across the northeastern quadrant (not specifically limited to the Northeast- imagine cutting the nation into 4 pieces) of the United States.

Total accumulated snow from the GFS through the morning of Dec. 22 shows who could get slammed: 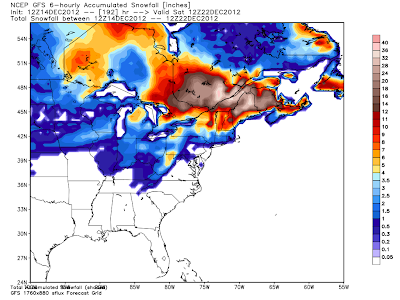