There is a possibility of a cold weather event and winter storm in during the November 16-20 timeframe. 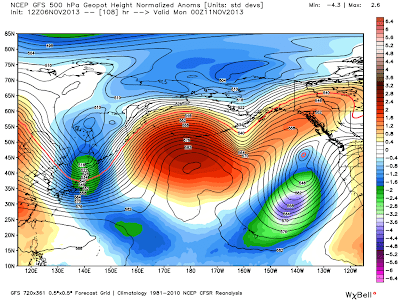 Shown above is the 12z GFS projection of 500 millibar height anomalies across the North Pacific. If you look over by Japan, you will see a swath of negative height anomalies over that area. This is suggestive of a storm system in the area. As some of you may have seen on this blog and elsewhere, it has been discovered that troughing in East Asia tends to lead to a storm system and associated cold weather event in the East US roughly 6-10 days later, per Joe Renken. The image above is valid for November 10th, meaning we are looking at the November 16-20 timeframe for a potential cold weather event and winter storm.

As of now, there is no way to determine which areas may be hit by the potential storm system, and who may be affected by the cold weather. Per the weather pattern in the days leading up to the aforementioned timeframe of interest, I currently see the Plains at the best risk of this winter storm, mainly due to a rather strong high pressure system in the East US. However, as future model runs come out, the situation is bound to change. In the same sense, the potential areas affected are bound to change. This is a very fluid situation, and asking if your area may be affected will not yield any accurate answers, unfortunately.

There is a very slight chance of a winter storm that may impact the Plains, Midwest and Northeast.

The European model had previously been showing a major snowstorm in the Plains, Midwest and Northeast from the November 13 to November 16th period. This came as the model projected a storm system to develop in the southern Plains that then moved north and east to spread snow across the aforementioned regions. The model has since lost the idea of the major storm, but with other guidance also showing the potential for snowfall in these regions in roughly the same idea (which we will discuss later), we are gong to look at the mid-level atmospheric set-up to determine if that forecast is even realistic.


The mid-level synopsis for this time frame from the 0z ECMWF shows a deep trough across the Plains, which in turn has provoked slight ridging in the East that gradually increases to a staunch high pressure system on the Maine border with Canada. This does have some merit- with model guidance in agreement on stormy weather prevailing over quiet weather on the West, the potential for high pressure ridging in the Southeast grows. That said, with the idea of a storm system arriving in the Plains, it wouldn't be difficult to imagine that the storm would then make a beeline for the Midwest and Plains, before possibly pushing north or east. This would only be possible if we see the colossal ridge in the Bering Sea break down in the day or two leading up to this projected storm.

Ensemble guidance confirms the widely-expected idea that a massive ridge will blossom in the Bering Sea in the next several days. When that happens, a very meridional (wavy) pattern will evolve throughout the eastern Pacific and North American regions. This huge ridge in the Bering Sea will lead to some decent troughing activity across the waters in the far northeast Pacific, with this resulting in ridging across the Rockies in North America.

Two or so days later, models agree that the ridge will start to flatten out across the northern Pacific, and it is here where the potential for this storm system arises. When that ridge flattens our, it is expected that the aforementioned troughing anomalies in the northeast Pacific combine with negative height anomalies in the Arctic to create an elongated negative height anomaly zone, and this would be expected to carry the storm system. As the elongated negative height anomaly zone moves east into the Rockies and Plains, previously-entrenched ridging over the Canadian Maritimes flexes its muscles once again, and provokes a situation akin to the one shown in the second image on this post.

Based on all of this information, and accounting for trends in the GFS and its ensemble set, I'm really unenthusiastic about this storm. While it technically can happen, and there is a chance, bear in mind that chance is very low. I do think there will be a chance for some snow during this timeframe as the pattern attempts to switch to a more winter-like pattern, but as of now, I'm not seeing a major winter storm in the forecast for the Plains, Midwest and Northeast.