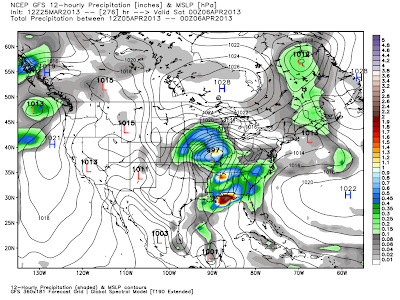 There is potential for a major storm system hitting much of the nation between April 5-7.

The latest American model forecast has a major storm system impacting the Midwest, Great Lakes and South US. As of now, the latest American GFS model has a solid snowstorm hitting southeast Minnesota, portions of Wisconsin, portions of Iowa and even into southeast Nebraska. This would be 'heart-attack snow' event, in that the snow would be very heavy due to marginal temperatures. As of now, the European model does not have this timeframe within its forecast period- we will need a few more days before that model can grasp the April 5-7 time period and confirm or deny this potential storm system.

Current thinking on this system is that there is potential- the long range looks to have an active Pacific jet stream, something that could enhance storm chances and storm strength if the storm were to happen. 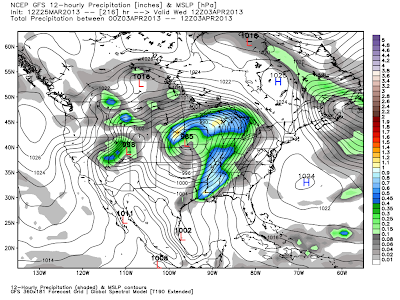 There is potential for a winter storm from April 2-4.

The long range American model is projecting a strong storm system to hit the Midwest between April 2 and 4, bringing significant precipitation to the Plains, Midwest, Great Lakes and South US. The American GFS model has been projecting this storm system to hit the nation for at least a few model runs, although the strength and expanse of the precipitation varied. Taking a preliminary analysis at this forecast map, it looks more like Nebraska and southern South Dakota could achieve a significant RAINstorm (bet you thought I would say snowstorm, right?), while southern Minnesota and maybe into Wisconsin could reach the needed criteria for a big rain event. Towards the South, it seems more apparent that this would also be a rain event, possibly even a severe weather event. However, the exact dynamics in this event are very much to-be-determined. Current wind shearing forecasts during this timeframe are optimistic for at least a few stronger thunderstorms, but nothing reaching the level of intense severe weather event. 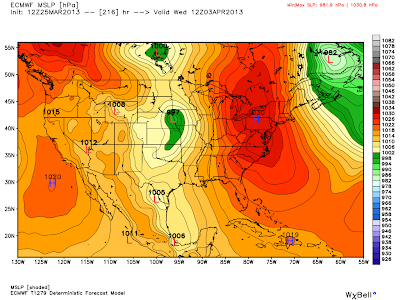 The European model is actually showing an incredibly similar situation for this event, putting the center of low pressure in what appears to be the exact same spot as the American model. The European model has this storm system just a touch weaker than the American, but the fact that their placement of the storm system matches up as well as it is is incredible enough.

The American ensemble forecasting system has the system much further to the south than these two model forecasts, and both ideas will have to be monitored in the event that this system's potential does come to fruition.

Andrew
By Andrew at 7:55 PM No comments:

Long Range Chatter; Will The Cold Ever End?

It’s looking more and more like the unusually cold weather we have been experiencing may very well continue through the remainder of March and at least a week into April.

Much of the country has been in the grip of a serious chilly start to winter, with temperature anomalies well below normal in many parts of the country. We have seen lower than 6 degrees (K) below normal in the heart of the Plains, with only a fraction of the Southwest and much of New England getting into above normal temperature anomalies from the start of March to March 23rd. While this may seem like a brutal start to spring, there's only slight indication it could end by mid April. 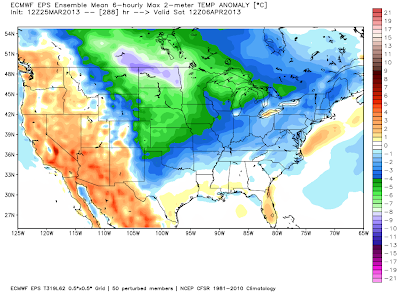 Shown above is a forecasted image from the European ensemble system, projecting 850 millibar temperature anomalies for 12 days from today. While a brief relaxation of the current cold snap is incoming, the chances of a follow-up Arctic cold shot are high. The European ensembles have anomalies just above 10 degrees (C) below normal across much of the northern Plains and Upper Midwest, with less-intense below normal anomalies across the Midwest and the rest of the Plains. Cool weather could reach as far as New England. This would more than likely continue the streak of cold weather across the nation, and the European ensembles bring another cold blast into the same regions just under 2 weeks out. 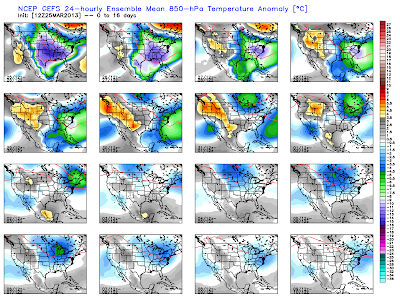 In the longer range, the American ensemble mean pushes the below normal temperature anomalies out of the Contiguous United States on March 31st. However, just a day later, we see a progressive cold shot in the Upper Midwest, and these progressive cold shots continue throughout the 16 day forecast period. In the longer range, the American ensembles seem to be hinting at below normal temperatures, mainly centered in the Eastern Seaboard and parts of the Northeast. 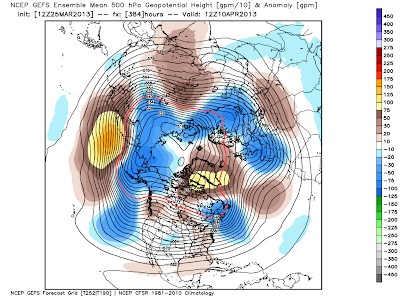 The general idea of the longer range is high pressure will continue to hold its ground over Greenland. When you see the placement of high pressure over Greenland, it is common to see an increased risk of cold weather across the northern Plains and New England. It also looks like we will be seeing a more active Pacific Jet Stream in the longer range, something that could add energy to the storm potential (winter weather and severe weather), especially in the Northeast. There are a few more indices I am observing that seem to support some stormy times for the Northeast. Whether that ends up as winter weather or severe weather remains yet to be seen.

So what is driving all of this cold weather??

Looking towards mid October, we see a moderation in snow cover anomalies over the northern Hemisphere. Let's take a look at what January 2013 brought, temperature anomaly-wise.

As unequal as this may look, you can kind of see how the Plains cold and Northeast warmth can cancel out. Now, this could very well go towards the side of below normal temperature anomalies across the month of January, but I still can see how the relatively normal snow cover anomalies during mid October 2012 can reflect onto the observed temperatures in January.

Now, the end of October 2012 held very above normal snow cover. This correlates to a weaker than normal polar vortex, which can easily translate into below normal temperatures across the nation. Considering the snow cover anomalies came in late October, and we are seeing the extreme cold now in March, there is little reason to not believe that the Siberian snow cover/temperature correlation isn't an actual index.

Beyond the beginning of April, I expect a rather moderated temperature pattern, but with cold shots moving throughout the nation every once and a while. The frequency of these cold shots will decrease as spring progresses on and winter inevitably releases its grip on the nation that should be enjoying a beautiful spring.