Multi-model guidance above for the 8-10 day period shown is in average agreement, with highest disagreement area over northern Canada into Greenland, leading to additional disagreement over the Northeast United States. Model confusion revolves around whether to allow development of strong low pressure over Greenland, which would then help chances for ridging out towards the Northeast and East Coast. ECMWF and GFS are in the "best" agreement of the three model suite, with the ECMWF centering the anomalous low pressure west of Greenland and the GFS strengthening said low pressure system and placing it south and east of Greenland. The difference in location will affect the large-scale weather pattern, with a more compact solution with that upper-latitude low pressure system as exhibited by the ECMWF leading to stronger ridging along the East Coast. On the other hand, if the system is to be placed east of Greenland, the low pressure would be elongated from the Bering Sea out to the waters east of that land mass, and that would temper ridging prospects in the East US.

Model guidance is in good agreement on ridging keeping a chokehold on the Arctic Circle, which will prohibit reformation of the polar vortex across that area, and thus will keep the risk for cold weather across lower latitudes rather high. All modeling systems are also in agreement on ridging appearing over the southern Gulf of Alaska and into the north central Pacific, and we also find a consensus among the guidance with deep low pressure over the Bering Sea into Alaska. Now, for the long range that we are watching over for this time period (8-10 days out), this means we will be seeing a pattern that will most likely keep out extreme cold weather like we will see to kick off the upcoming workweek. In the long-long range, this somewhat-anti-cold pattern will flip over. 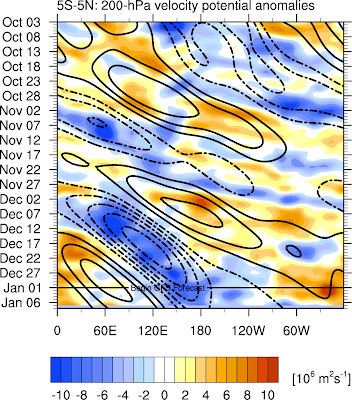 This map from Michael Ventrice shows 200 hPa velocity potential anomalies over a time-longitude graph. Blues and dashed ovals indicate the presence of enhanced convection (and thus a Madden-Julian Oscillation / MJO wave), while solid ovals and warmer colors signify a suppressed MJO wave. Taking a look at past, present and future conditions, we see how the MJO wave has been progressing across the Indian Ocean and towards the central Pacific for some time, oscillating through the various phases of the MJO. Some dynamical models were giving off a false "dead MJO" signal, where the guidance indicated the MJO was too weak to track. In reality, this was another body of enhanced convection firing over South America. This dual-placement of tropical convection is referred to as a "Wave 2" pattern, due to the two waves of active convection. In reality, the MJO signal was always oscillating around the phase space, as the progression of the MJO wave in the graph above shows. Now, as we look ahead, the GFS projects the MJO wave to continue pushing east, to be centered at the ~170E longitude mark around January 10th. This is a classic forecast of the MJO pushing through Phase 6 (centered around 160E), and Phase 7 (centered around 180). Model guidance should see an intensification of either the zonal flow across the US or ridging on the East Coast, as ridging in the US is common in a January Phase 6 event. A January Phase 7 event results in significant ridging in the West that will then transition us into the mid/late January cold blast that I began discussing earlier today. 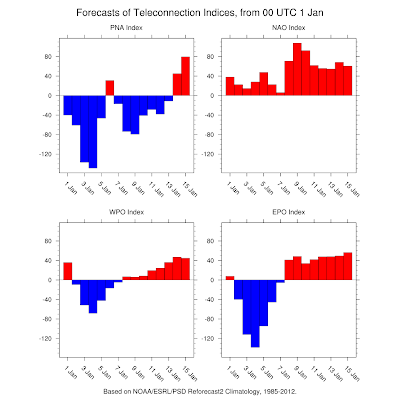 Teleconnection forecasts from the ESRL agency appear to be handling the upcoming pattern decently well, with a few spots that may be refined in future forecasts. The Pacific North American (PNA) index is projected to be deeply negative in the short term, meaning deep troughing across the West US. I expect we see this deep negative forecast moderate to more neutral territory, as the MJO does not really support such a huge -PNA event. I find it more likely that this strong troughing will be more displaced to the east, as ensemble guidance supports. From then on, we see another negative PNA spell before spiking positive. I have good confidence in that +PNA spike in the long range, with some decent confidence in relatively neutral PNA values in the medium/long range. For the North Atlantic Oscillation (NAO), the index is projected to remain positive throughout the forecast period. I figure we will see a slight negative trend in the long range +NAO values, as an MJO Phase 7 supports more negative NAO values. However, other than that, I feel confident in the prolonged +NAO forecast. The West Pacific Oscillation should stay positive for much of the forecast period before a reduction to neutral or negative territory comes about in the long range in response to the transitioning MJO. I disagree with this WPO forecast. The East Pacific Oscillation (EPO) looks to me like it will be more negative than positive. The medium and long range EPO is projected to be positive, but ensemble guidance disagrees and places the EPO at a more neutral or slightly negative stance. I expect we will see some correction in that direction for future teleconnection forecasts.

There are increasing signals that we will see the polar vortex unleash potentially historic levels of cold air upon the nation, mainly targeting the Plains and Midwest.

The Madden-Julian Oscillation (MJO) is projected to move into Phase 6 as we progress into January. For those who don't know, the Madden Julian Oscillation involves the placement of enhanced tropical convection over the Equatorial Pacific, extending from the Indian Ocean to roughly the middle of the Pacific Ocean nearly due east of northwest South America. The MJO entering Phase 6 means that the enhanced tropical convection will be northeast of Australia. After that Phase 6 movement, it looks like we will head on in to Phase 7 of the MJO, and that's the one we need to keep an eye on. This forecast, made by four separate CFS ensemble members, shows us entering Phase 7 around January 15th.

If we take a look over RaleighWx's Phase 7 500mb anomaly chart, we see that Phase 7 of the MJO in January sees major ridging forming over the Western US and well into Canada, even over the Bering Sea. This is a classic example of a positive Pacific North American (PNA) index, which alters the jet stream so that the jet stream spikes north in the West due to that ridging, and then plummets southward in the Central and East US. This leads to a pattern highly conducive for cold weather in those areas. Adding to that conducive pattern is the highly negative North Atlantic Oscillation (NAO), as is exemplified by the heavy ridging over Greenland. All of this ridging across the upper latitudes then allows a negative Arctic Oscillation (AO) to form, which only adds to the intensity of the cold air in the US. All in all, the Phase 7 really creates the best environment that we can look forward to in the medium/long range for some cold weather.

This is all good and fun, but the really interesting stuff comes up when you take a look at the Climate Prediction Center's analog-produced upper air outlook for the medium range.

Does this chart look familiar? It should, because the anomaly placements are almost identical to the Phase 7 composite above when viewing the North American continent. We see extreme ridging over the Gulf of Alaska, which then allows for the formation of not only a deeply negative EPO (a key player in this impending brutal cold spell), but also a classic McFarland Signature look.

This image from the National Weather Service in 2010 shows what the McFarland Signature looks like. You have the massive ridge set up across the Gulf of Alaska and into the West Coast, and this leads to deep negative height anomalies developing just to the east, usually in the Central and East US. These deep negative height anomalies allow frigid air to be transported from the upper latitudes down into the United States, and I anticipate a very similar situation to evolve here again in the medium range time frame.

Taking a look back at that analog image above the McFarland picture, we see not only the well-established McFarland Signature/-EPO, but those deep negative anomalies being projected as very pronounced across the Central United States. Based on how pronounced those anomalies are, as well as analyzation of the jet stream and temperature patterns during this timeframe, it does appear that the polar vortex would be entering the United States. This wouldn't be any low pressure system; if this were to happen, we're talking record cold. Remember that the polar vortex is the low pressure system that sustains the cold air in the Arctic, so bringing a portion of that vortex down south into the US could be disastrous for farmers growing crops not only across portions of the Central and Eastern US, but also down in the South.

Model guidance is in good agreement about the polar vortex first affecting the United States around January 6-8. Beyond then, we may have to wait a little while until the MJO gets into Phase 7 before we see a resurgence of cold.