I have decided to go ahead and change the title of this event to a 'Significant Tornado Outbreak' in light of strong Storm Prediction Center discussion wording, very favorable projected soundings, and the wind fields from different levels of the atmosphere.

The Storm Prediction Center in Norman, Oklahoma has released three areas highlighted for a severe weather event in the long range forecast. The three areas are highlighted for April 8th, 9th and 10th, and I have used those dates to make the appropriate dates for this post. First area of interest is in northwest Kansas, where the storm system may put out an area of severe weather the day before the big show begins. The big story is late in the evening on April 9th into the overnight hours and morning of April 10th. 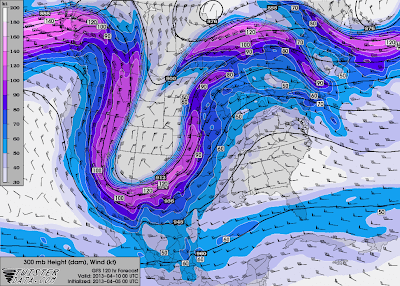 Strong jet stream will punch into the Plains with this system to allow upper air support to a severe weather event. Wind speeds well over 100 knots will be focused in the immediate vicinity of this severe weather event for April 9th. Jet streak of 120 knots appears to be pushing north and east with the movement of the storm that will most likely aid in more enhanced tornado development in Arkansas and portions of MO/OK. Extrapolation of this image would have the jet stream slide up the stream and eventually depart overnight to possibly aid in thunderstorm development further north into the Midwest;  however the extent of that potential is yet to be seen. 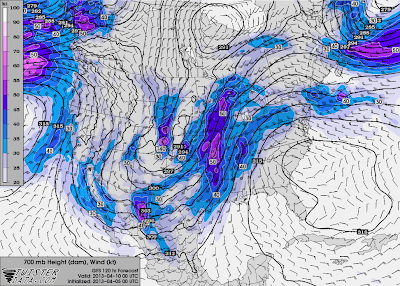 Lower level winds will be howling above 50 knots in the areas where severe weather development is expected. Weaker winds in the 40-50 knot range are encompassing nearly the entire area outlined in purple by the Storm Prediction Center for this outbreak on April 9th. Main concern rests in areas where lower level winds are maximized- I feel it is these areas that will have the most support for tornadoes and general severe weather. Certainly cannot count out a strong, long-tracked tornado with this event. Wind shear will be enhanced from border to border to allow for the thumbs-up for tornado potential. The more wind shear is present, the more favorable the environment becomes for tornadoes. These favorable upper and lower level wind fields, combined with the widespread elevated wind shear tells me many are in for a rough ride come Tuesday.

Sounding from central Arkansas valid for the evening of April 9th unveils a loaded gun sounding. The loaded gun sounding is signified by a slight capping inversion (yellow line to the left of the red line) just above the surface, with high instability above that capping inversion (yellow line far to the right of the red line). The name 'loaded gun' comes from the idea that the 'gun' (severe weather) could fire at any time- the trigger (capping inversion) just has to be pulled (erased). As soon as that capping inversion is erased, the severe weather gets going. Typically, you will see a loaded gun sounding that is much stronger, where the yellow line is much farther away from the red line than what you see above. What you see above is an 'okay' loaded gun sounding. Regardless, the mere presence of the loaded gun sounding indicates that severe weather is targeting this area. Looking at a few choice parameters on the righthand side of the sounding, we see just over 1300 units of CAPE (instability). That number isn't too high compared to what you can see in spring, but considering this is the first outbreak of the season, it isn't too shabby. Just below the 'Wind' section, the STM (storm motion) parameter is at 237/37. This means the storms will be moving from the southwest and to the northeast (237 degrees on a compass points towards the southwest), while the number 37 refers to how fast the storm will be going in knots. The last value of the numbers is BSHR, which indicates bulk shearing. We see that at a solid 96, meaning there will be quite a bit of shearing in the area- a big tornado factor. PW (precipitable water) will be at 1.66 inches, a very humid atmosphere thanks to the flow from the Gulf of Mexico. The BRN (Bulk Richardson Number) is in the teens, which is the prime range for severe thunderstorms. The EHI value is at 3- the higher the number, the more rotation and energy there is in the atmosphere (thus, the higher chance of a tornado). 3 is considered a solid amount of rotation and energy.  HEL shows helicity, the pure spinning of the atmosphere. That value rests at 365, quite a high number and conducive for tornadoes. 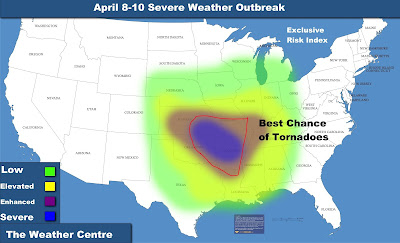 Have finally added a 'Severe' demarcation to the graphic to highlight where the highest chance of overall severe weather is. Also added a red delineation to highlight where I believe the best chance of tornadoes will be. I am concerned for the Arkansas area and surrounding regions as far as tornado potential goes, I fear that lives may be lost if enough rotating thunderstorms can form and mature to become supercells. Other than those two additions, the ERI graphic was not changed. Will likely have a special graphic out tomorrow to highlight the specific tornado threat.

Please share this with friends, coworkers and family- this is the first severe weather outbreak of the season, and it could be a tornado outbreak. Many are likely unprepared.

Andrew
By Andrew at 4:08 PM 8 comments: Links to this post