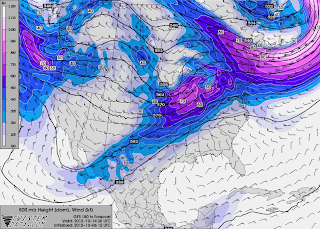 Winds at the 500mb level indicate a strong yet compact disturbance will be pushing its way into the Midwest and Great Lakes, with winds at that level surpassing 70 knots. The system appears to be trying to attain a negative tilt, which would allow more enhanced stability to develop compared to positively tilted storms. The difference is the direction the lines above are facing. A positively-tilted storm would have the lines pushing southwest, while a negative tilt looks like the lines are moving to the southeast. The presence of such a small area of high winds is alarming in that the atmosphere may be trying to produce a tornado threat- something I wouldn't doubt with such strong mid-level winds. 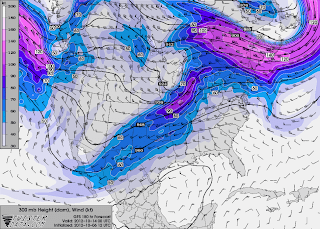 The jet stream orientation at the 300mb level is also cause for concern, as we see a defined jet streak extending from the central Plains into south central Canada. This particular streak has winds higher than 100 knots, especially on the Missouri/Iowa/Illinois border. For those wondering, a jet streak is a 'streak' of winds in the jet stream that are higher than the rest of the jet stream. Considering the rest of this stream has winds residing in the 40 knot area, this 90-120 knot streak in the Midwest and Great Lakes regions is definitely cause for concern. 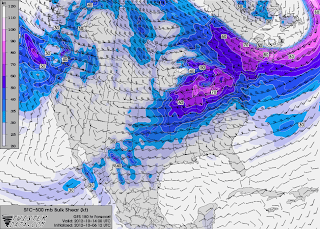 This third wind-oriented graphic is one of the more important ones, dealing with tornado potential and seeing how strong the storms in question could get. This is the surface-500mb shear chart, and we see some pretty high values in the area we are watching. 60-70+ knots of shearing is likely- an anomaly for this late in the season, and is something that should catch the eye of the weather world. It isn't often you see strong shearing values at these levels, but when you do, a fairly good severe threat is associated with them. That said, the Midwest and Great Lakes need to monitor this situation, as tornado potential (and overall severe weather potential) appears to be increasing. 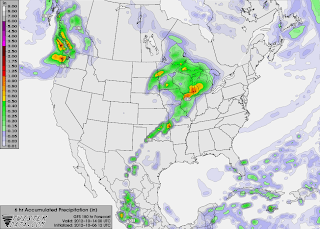 6 hour precipitation over the nation does indeed show nearly an inch being forecasted over parts of the Midwest, especially near cities like Chicago, Milwaukee and western Detroit. The presence of such high precipitation values tells me that this will be a line of storms, which drastically lowers tornado potential, but does not eliminate it. This linear theory is confirmed by the presence of a diagonal line of showers and storms in Oklahoma and Texas. I have no doubts that, should this storm verify, the Midwest and Great Lakes would be the hardest hit, as the atmosphere appears very well primed for such a scenario.

This map is valid for Saturday evening, October 13. It is subject to change and will be drawn better in the future- I am squeezed for time and this is the best I could draw up at the moment.