A low pressure system will move northward from the South Central US into the Upper Midwest while intensifying. This system will be drawing in warm air and moisture from the East as well as colder air from the North. It appears that enough cold air should wrap around the western edge of the system so that there will be snow in Minnesota, Iowa, and possibly into the Dakotas. The big question is how much. The trustworthy ECMWF model is predicting upwards of 4 inches widespread across the affected area, while the GFS indicates that the warm air may overpower the cold air wrapping into the western edge of the storm system. It is apparent that the level of cold air and warm air will be the determining factors of this storm, as well as track; the GFS has been shifting southward in the last few cycles, which may affect the amount of snow and rain, as well as placement of the snow and rainfall.
By Andrew at 4:35 PM 4 comments: Links to this post

Christmas Snowstorm Not Out of Question

There is potential for Christmas Eve and Christmas Day to get messy in the Eastern US. Above is an image from today's 12z GFS model at hour 348. It shows a low pressure system moving ENE across the midsection of the country. The GFS model has been showing the potential for a storm in the Midwest/Great Lakes/Ohio Valley for a few runs now. The set-up will be in the form of a series of storms coming ashore the West Coast. Several storm systems are expected to move on to the West Coast as the systems are moving eastward across the Pacific. These storms are likely to move into the Southwest, spin around a bit before edging their way eastward, strengthening after being torn up by the mountains, and affecting the Eastern US. This active period is a sign that the pattern is changing.
What is much more intriguing is how in-sync the ECMWF and GFS 12z models were today.
The ECMWF model can only go out to hour 240, whereas the GFS can go out to hour 384. 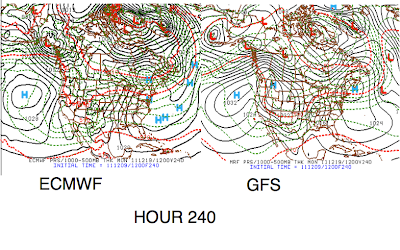 As you can see, there are many similarities with hour 240 of the 12z ECMWF and 12z GFS models. If you can't see them, we are happy to list them off:

The big thing is how the features over the oceans are very similar. This is because the Pacific is the one that usually supplies the bigger storms, and to see these two major models very similar to each other could potentially mean that the ECMWF is buying into the idea of a Christmas Day snowstorm, which would dramatically increase my level of confidence for this storm.

The timeframe that the ECMWF will get its first glance at the potential storm in its timeframe is the December 13-15 period. Until then, model comparisons like the ones shown above can help determine if the ECMWF likes the prospects for this storm or not.

For all our holiday travel information and potential storm coverage, stay here with The Weather Centre, and check our Facebook Page for frequent updates on a daily basis.
By Andrew at 3:48 PM 5 comments: Links to this post