WARNING: The chances of a significant snowstorm in April are VERY low. This post is only showing one model's output, and is made to alert people that there could be some snow in this timeframe. I do NOT expect we see these amounts verify exactly.

I'm watching the April 13-15 timeframe for what could be a strong storm system resulting in, yes, snow. 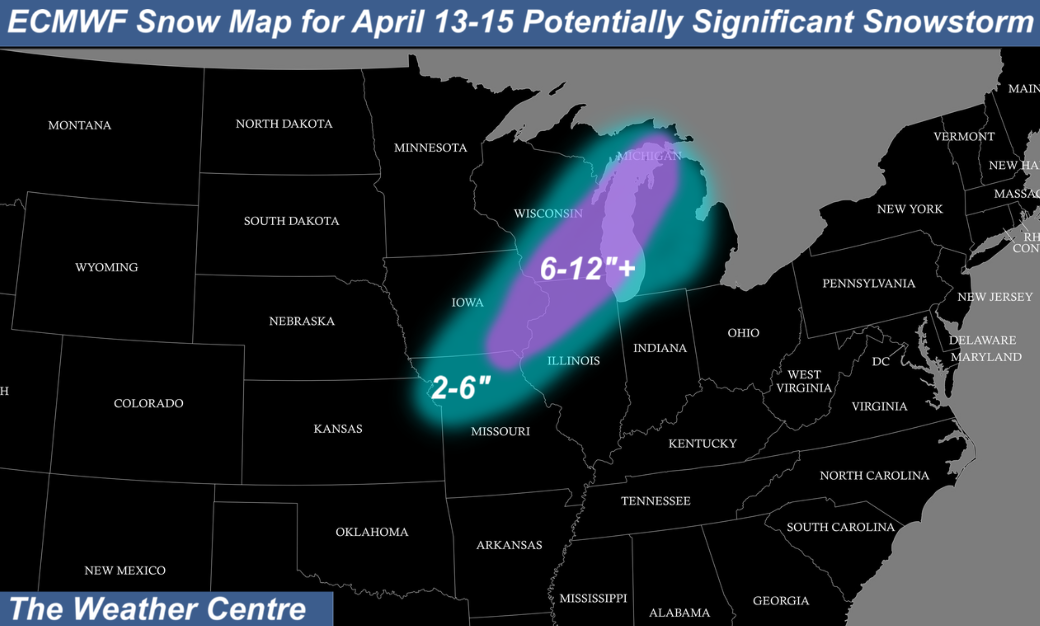 Shown above is an image depicting the most recent ECMWF model snowfall forecast for a potential April 13-15 snowstorm. The exact image showing the ECMWF snowfall output cannot be displayed for copyright purposes. In this most recent forecast, we saw a swath of 2 to 6 inches of snow stretching from northern Missouri into western Iowa and central Illinois, before moving northeast into both land masses of Michigan. Inside that accumulating snow swath, we then see a rather large area of 6 to 12 inches-plus of snow from western Iowa and northern Illinois into southeastern Wisconsin, before continuing into the northern LP of Michigan. As I mentioned above, I do not expect we see these snow amounts hitting for this timeframe; this post is merely to alert people about the potential for snow.

There is some merit to the idea that we may see a strong storm system, as the ECMWF is suggesting. Shown above was the observed 500mb height anomaly chart over the Western Pacific, where cool colors depict negative height anomalies/stormy weather, and warm colors represent quiet, warm weather. On the morning of April 6th, we saw a trough moving through Japan, possessing a pretty decent strength. This is significant, as it directly relates to what we may see in this April 13-15 timeframe .There is a rule, well explained by Joe Renken, that states a weather phenomenon in East Asia will be reciprocated in the United States 6-10 days later. This means that if there is a storm system in Japan on a certain day, we can expect a storm in the US 6-10 days after that. The same goes for high pressure and warm weather. Thus, we can expect a storm in the US on an April 12-16 period, and the April 13-15 ECMWF snowstorm falls right within this timeframe. Additionally, this trough in Japan brought along some pretty cold weather, which COULD contribute to additional chances for snow in this potential storm system.

Looking at the raw ECMWF surface pressure forecast for the morning of April 14th, we see the storm system at a pretty low minimum central pressure, likely below 1000 millibars, in the middle of Missouri. The ECMWF model may be locked on to this snowstorm idea, but its ensembles are much more uncertain.

The image above shows the projected mean surface pressure by the ECMWF ensembles, as well as the spread among all ECMWF ensemble members in the shown colors. We first observe how the ensembles are much less enthusiastic about the idea of a storm system for this timeframe, only bringing a minimum 1006 millibar swath of low pressure over an area just to the east of the ECMWF model. This sort of weaker projection is to be expected, as these ensemble means take the average of 52 ensemble members, unlike the ECMWF model, which only shows one solution. The next item we observe is the swath of oranges and yellows over the Plains and Midwest. These warmer colors indicate a higher spread in the ensembles; in other words, the ensemble members are in higher disagreement with one another over this higher spread envelope, thus indicating increased uncertainty. While this would initially disprove the idea of a storm system in this timeframe, note how the highest spread is located further west of the ensemble low pressure alignment, more in line with the ECMWF model. All in all, this means that the ensembles are seeing this idea of a storm, but aren't biting yet. 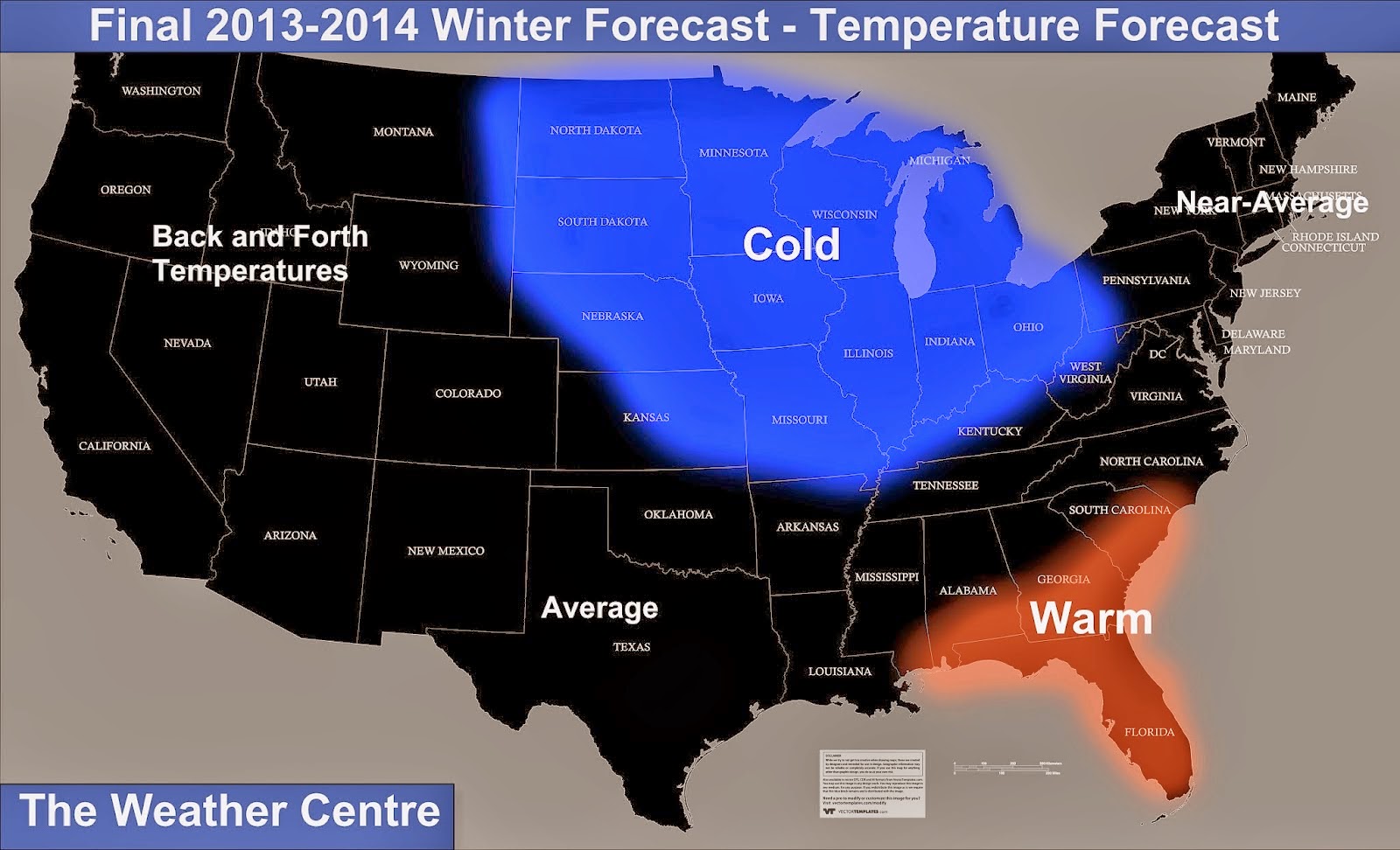 In my Final 2013-2014 Winter Forecast, I projected that we would see the core of the cold centered in the Northern Plains, Upper Midwest, Great Lakes, Midwest, Ohio Valley and into the Central Plains. The forecast also called for warmer than normal temperatures in the Southeast, while average conditions were to prevail over the southern Plains and the Northeast. My projection had the West US in for back and forth temperatures, ending up around normal.

Looking back at what actually happened this past winter, we saw the core of the cold in the Upper Midwest into the Midwest itself, with still well-below normal temperatures in the Northern Plains, Ohio Valley, Great Lakes, and Southern Plains. This part of the forecast verified quite well, with the only trouble spot being the Southern Plains, which ended up a bit cooler than forecasted. The Northeast observed overall normal conditions, verifying that part of the forecast. The Southeast did end up a bit warmer than normal, but not as much as I thought it would be. The main trouble spot was in the West, where we saw warmer than normal temperatures instead of the average conditions I predicted. This can be attributed at least partially to the drought, as well as the persistent ridge in the Gulf of Alaska.

On a self-grading scale, I might put this forecast at an A-minus, maybe down to a B-plus. 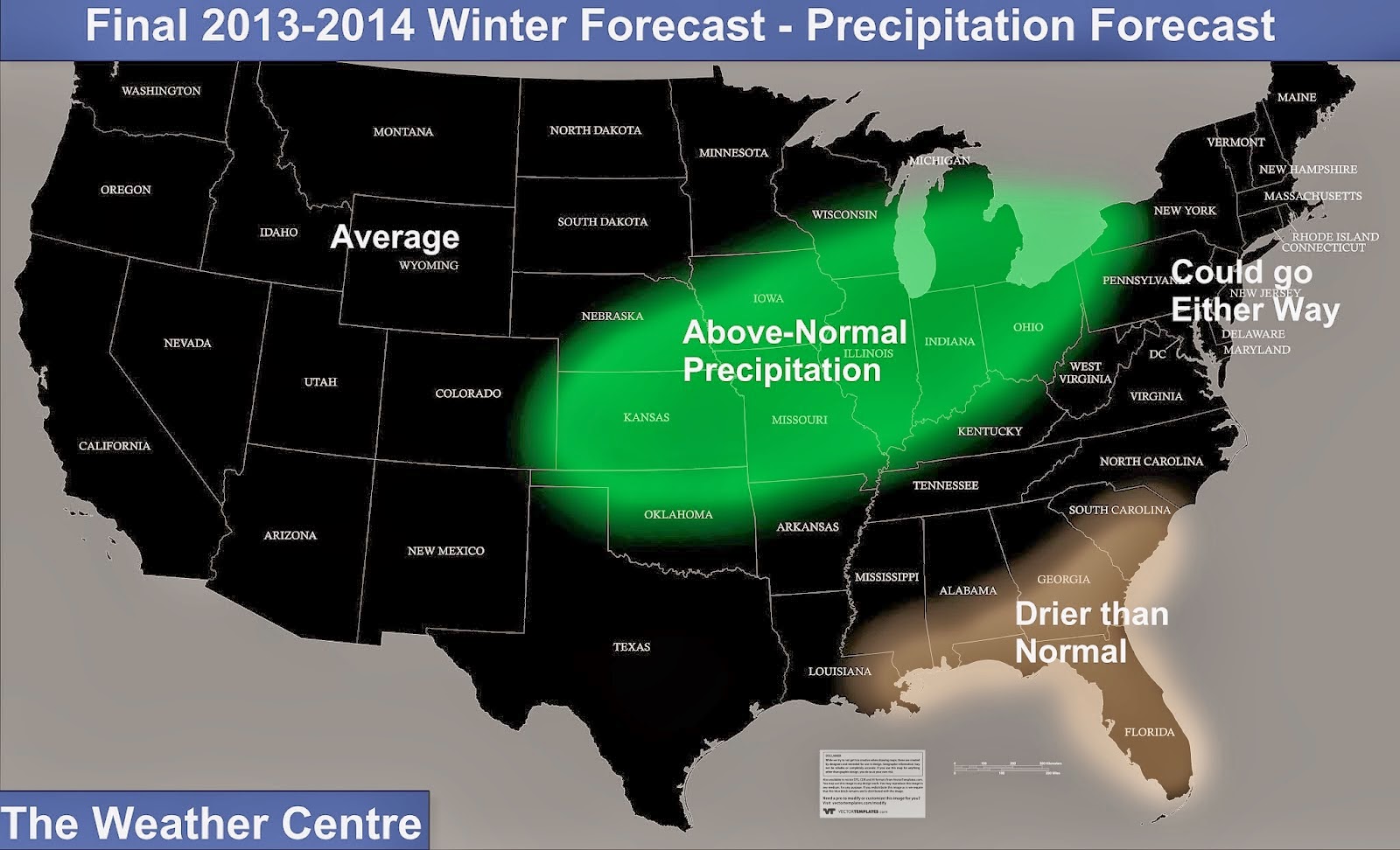 For the precipitation forecast, I anticipated above normal precipitation from the Central Plains into the Midwest and Great Lakes, believing that was where we would see the primary storm track. I also believed a drier than normal winter was in store for the Southeast, with neutral conditions in the East and West. 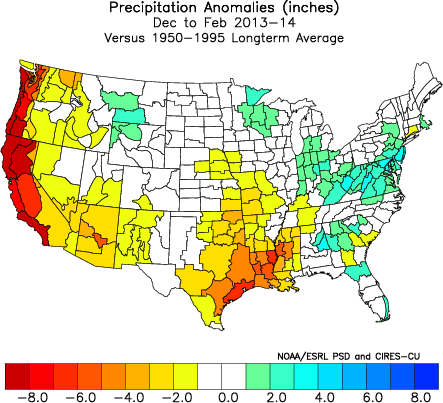 This part of the forecast actually busted quite badly. The Central Plains saw below normal precipitation rather than the above normal precipitation that was forecasted, though we did see verification in the Great Lakes. Overall, the East Coast didn't stray too far from what I thought would happen, ending up only slightly above normal overall compared to my projected average conditions. The West US definitely busted hard, with a serious drought taking over instead of my forecasted average conditions. The Southern Plains also ended up drier than normal, while the Southeast did not.

On a self-grading scale, this portion of the forecast likely deserves a D-plus. 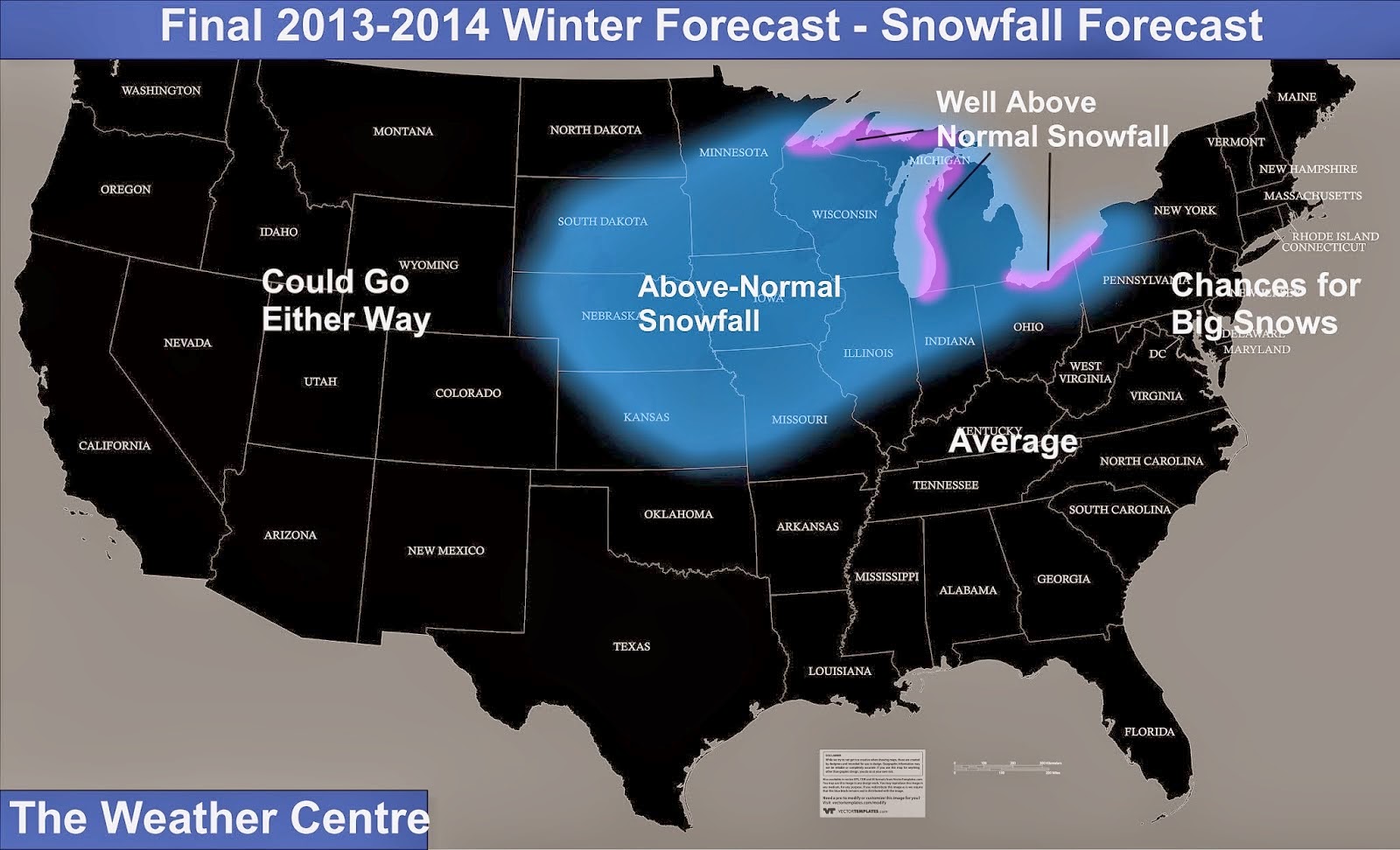 The snowfall forecast called for snowier than normal conditions over the Plains, Upper Midwest, Midwest and Great Lakes. The rest of the country was pegged for average conditions, with the East Coast possibly in line for some big storms.

I do not have a verification image, but I can affirm that the Midwest and Great Lakes regions verified accurately in this portion of the forecast. The East Coast ended up a bit snowier than I thought it would, and the West definitely got much less snow than what is considered average.

I would put the accuracy of this forecast at a B even. 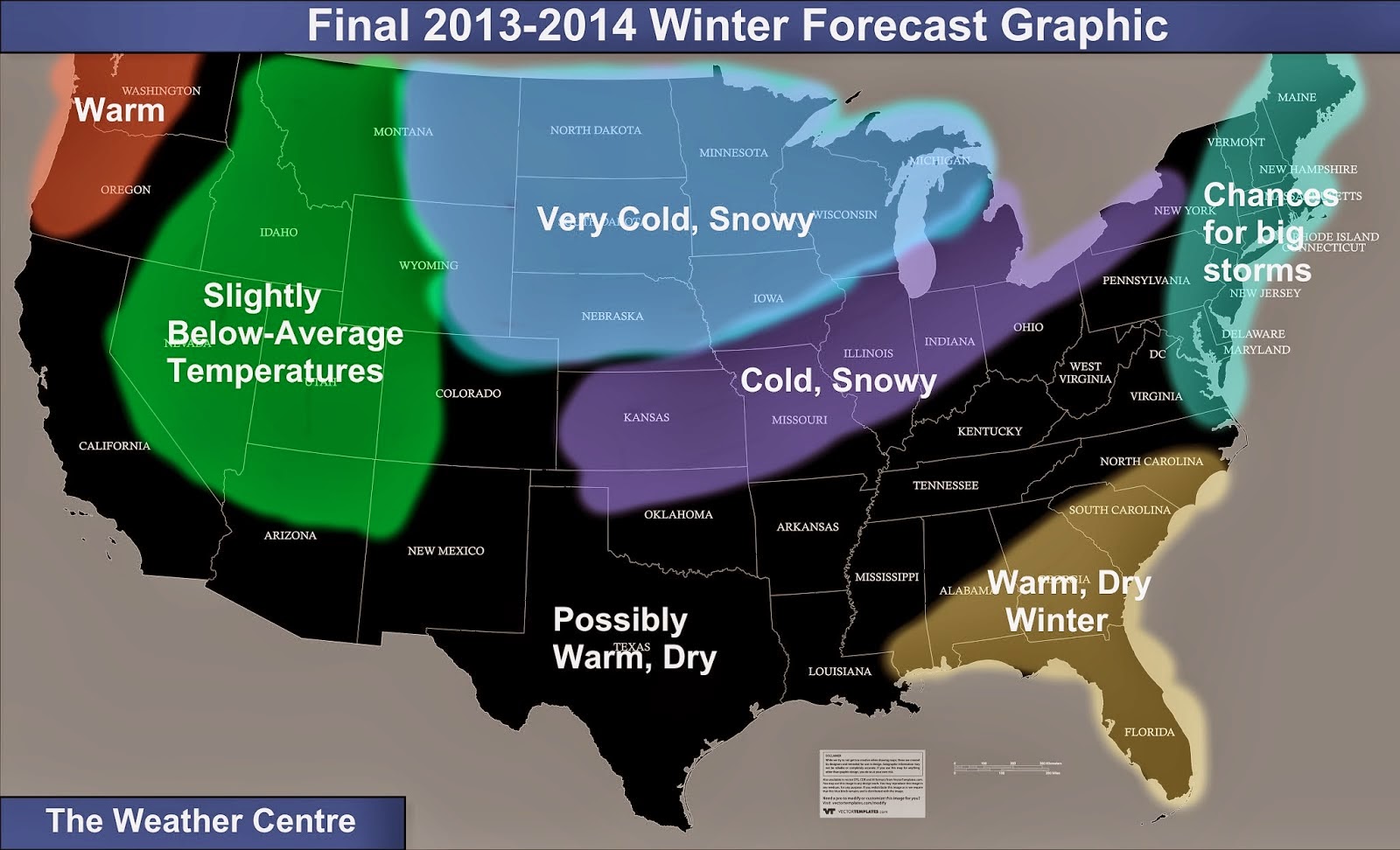 The overall forecast called for some big snowstorm potentials in the Northeast, with a warm and dry winter in the Southeast. The risk for a warm and dry winter existed in the Southern Plains, with a cold and snowy winter outlined for the North Central US. Slightly below average temperatures were anticipated for the Rockies, while a warmer than normal winter was projected for the Pacific Northwest. I feel verification of this graphic went better than I actually thought it would, with most areas seeing at least partial verification of this winter forecast.

For the overall forecast, I believe a grade of B-plus would be appropriate here.

What did you think of the accuracy of this forecast? Comment below with your thoughts!