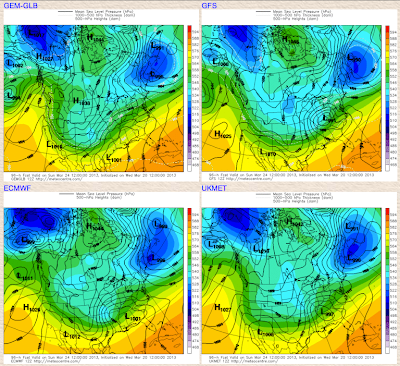 Model guidance remains disorganized as far as where this storm will go. The past 24 hours have seen model guidance stage a southward shift, now bringing the storm through the southern Midwest and into the Ohio Valley. This track would bring the heaviest snow more into the southern Midwest, Plains and portions of the Ohio Valley. Models shown above are the Canadian model (GEM), American model (GFS), European model (ECMWF), and the United Kingdom's model (UKMET). The forecast period is for Hour 96, which is 4 days away from today, and is forecasting 500 millibar heights in colors and pressure values in the black contour lines. Canadian, European and United Kingdom model guidance prefers a southern track, which would take this system through the southern Plains into the far southern Midwest and northern Gulf Coast states, before moving offshore and possibly instigating a disturbance out there, although model guidance is too great to divulge anything further than that for the Northeast. European model has definitely been more consistent than other guidance, with a solid track of having the storm go through the southern route. Other model guidance has been catching on as of late, with all but the American model pulling for a southern track.

Rather than just stare at the models and see what we can get out of them, let's look at the projected atmospheric set-up and see what the atmosphere is most likely to do with this system. This is the forecasted 500 millibar height anomaly from the American ensembles (also supported by at least one other ensemble system), where cold colors indicate low pressure and warm colors depict high pressure. This forecast is valid as the storm is moving towards the Midwest and Ohio Valley. We'll start off with the monumental high pressure system over northern Canada and Greenland. This type of set-up is one that typically allows storms to be suppressed to the south. In that vision, the European model's idea of the storm taking the southern route is not that far-fetched. However, there is an obstacle that must be overcome for this storm to be pushed far enough south to validate the European model's idea.

When the storm falls down into the Plains to begin its trek either east or northeast, it will naturally provoke high pressure in the Eastern Seaboard. This can be anticipated by the general idea that the low pressure system pushing down will force high pressure to form and push up to equal out the stress inflicted on the atmosphere. Because of this high pressure in the Eastern Seaboard, the storm could very well want to take the northern route and bring heavy snow to the Lower Great Lakes and northern regions of the Midwest, like I showed yesterday. Previous model forecasts enticed the idea of that ridge acting on the storm system and sending it north, but more recent guidance has the ridge being overwhelmed by the low pressure system, which is also very possible. 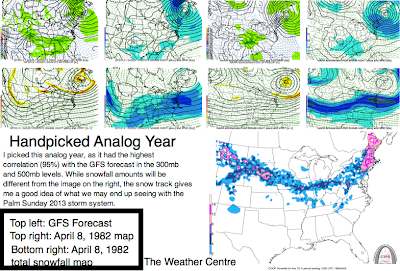 Here is my top analog for the upcoming Palm Sunday 2013 winter storm. I analyzed multiple analogs from the St. Louis University website, and chose the one with the highest correlation with the latest GFS forecast at the 300 millibar level and 500 millibar levels. These two levels are the most crucial in analog forecasting, as they project the jet stream pattern and high/low pressure alignment, both of which are key in this storm system in particular.

Considering how model guidance has tended to bring storms to the north just a day or two before the event happens, I'm not willing to discount either solution right now. I think both the northern solution and southern solution have valid reasoning and solid evidence as to why each could happen. The next 48 hours will be crucial to see incoming model forecasts as the storm edges closer to shore.