This post will address the first part of the January 1-3 winter storm, where anomalously strong clipper system will lay down significant snows in portions of the Midwest and Great Lakes. You can find the link to Part II, which addresses the effects on the Northeast, at the bottom of this post.

Global model guidance is in agreement with an Alberta Clipper system dropping down from Canada and traversing the Plains to enter the Midwest. Model discrepancies begin to evolve early on, namely when the NAM model takes the snow swath unusually far north into Central Wisconsin. More recent runs of that model have corrected southward back towards Southern Wisconsin and Northern Illinois, but that model will still have to be monitored. GFS/GGEM/ECMWF models hold the consensus with this super-charged clipper, as all three bring about significant snows stretching from Iowa to Chicago back into portions of Indiana and near Ohio. 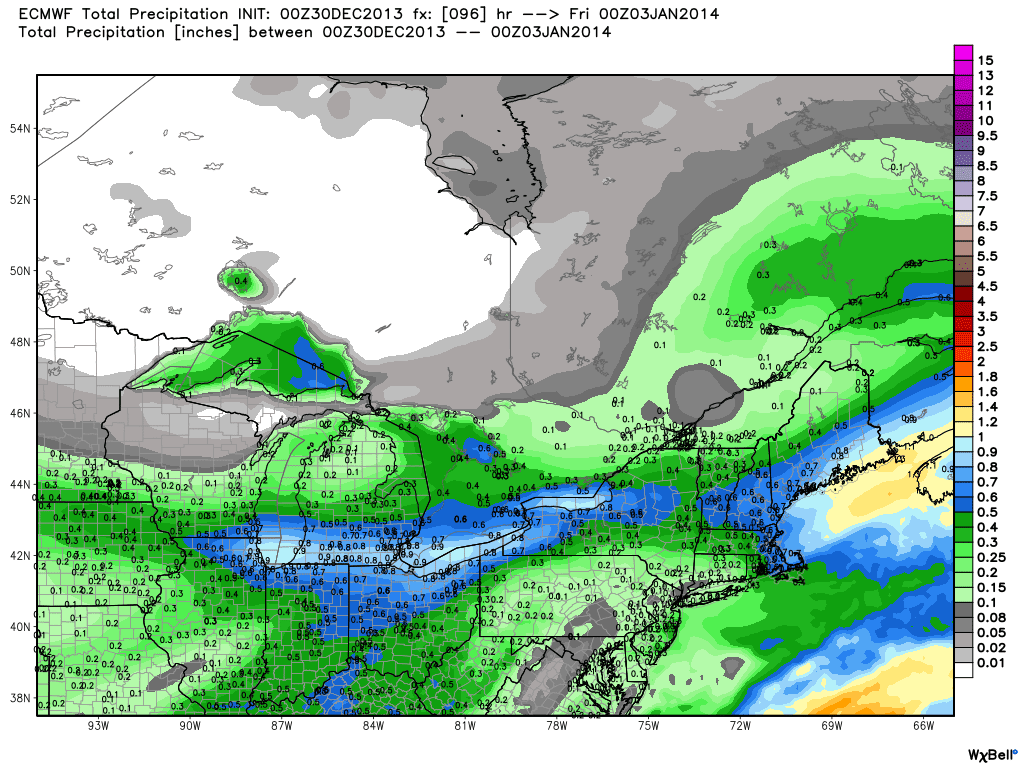 Global model guidance has been putting down liquid amounts around 0.6" to even 1.0" in northern Illinois into Michigan, and it is those areas highlighted above by the ECMWF that we are monitoring in this post. This event is actually a combination of as many as three different clipper events, with the third one bringing the most snow around New Year's Day. Because they're clippers, right off the bat we are going to most likely see higher snow-to-liquid ratios than usual. A typical snowfall has a 10:1 ratio, which means 10 inches of snow could be melted down into 1 inch of water. In this case, however, we're thinking that places like Chicago could see snow ratios of 15:1 or even 18:1, which means 1 inch of water could theoretically be fluffed up into 18 inches of snow. The ECMWF model above gives downtown Chicago 1" of precipitation, thanks to some additional lake enhancement, and if we were to use a 15:1 ratio throughout the whole event, maybe ending on higher ratios in response to possible lake enhancement, I could envision up to 15-17" of snow. Realistically, that is unlikely to happen. I find the ECMWF to be too bullish (overdone with precipitation) for my liking. The GFS/GGEM seem slightly more in line, with amounts closer to 8-15" being produced. This event would be a significant one if it were to verify as it stands right now. And while I don't trust the 15"+ forecast being implied by the ECMWF, it is theoretically within the realm of possibility.

My thinking for this part of the event is that the areas of southern Wisconsin, northern Illinois, northern Indiana, southern Michigan and northern Ohio will receive heavy snowfall from this system. Based on current model projections, I would issue a call for 10-15" for those areas (with potentially higher isolated amounts), but based on a slight concern models may draw back on QPF projections (quantitative precipitation forecasts, also known as precipitation forecasts), I'll go with a conservative 8-12" for the aforementioned regions, with the very possible chance for higher amounts.

The mean sea level pressure from the GFS model shows how this potentially significant snowstorm may evolve. We see the super-charged semi-clipper that was elaborated on in Part I over Indiana, but then we see another low pressure system skirting to the east of high pressure based in Georgia. It is these two bodies of low pressure that we are monitoring closely for what they will do. Current projections include phasing (combining) of the two systems, but the question is: When will they phase? In this case, timing is key.

Roughly 12 hours after the first image in this post, the GFS model has the two systems interacting. Originally, these two systems were at 1010 millibars just three hours before this image you see above. Now, with the low pressure system offshore the Northeast stronger than the one just south of Pennsylvania, it is apparent that the clipper system will be transferring its energy east to the system offshore New Jersey. Just a handful of hours later, the system has phased into a sub-1000mb system. However, it is further offshore than many in the Northeast would like, leading to less snow.

The GFS isn't the only solution in the mix, however.

The ECMWF is slower with this system, having it phase completely on the morning of January 3rd. Because timing is key with when these two systems will phase, it is apparent that this timing difference between the ECMWF and GFS is a significant factor in each guidance system's solution. The ECMWF has this system phase earlier and become stronger than the GFS, with an added bonus of keeping the system closer to land than the GFS. The precipitation and MSLP image above from the ECMWF, again valid on the morning of January 3rd, shows a 978 millibar storm system due east of New Jersey, spreading intense snowfall across Pennsylvania, New York, Vermont, New Hampshire and into Maine. Even coastal regions to the south of NY, VT and NH get in on some snowy weather. The snowfall image from the ECMWF below paints the full picture:


Also worth noting is that the ECMWF Ensemble Prediction System (EPS) is on board with the earlier phasing.

So what do I think will happen?
I'm thinking we do see something along the lines of the ECMWF verify. I do not believe we see the huge ~24" totals (models have a tendency this winter to back off of big precipitation forecasts just prior to an event), though significant snowfall is certainly within the realm of possibility, even likelihood. I feel we see a swath of heavy snow ("heavy snow" meaning 8"+) stretching from New York/Pennsylvania out to Maine in very similar fashion to what the ECMWF portrays above. I would also monitor future model runs to keep an eye on that southern cutoff of snow totals for coastal regions, as I feel those areas will have to go into the event with a 'now-casting' mindset.