By Andrew at 9:20 PM No comments: Links to this post

Make sure to like us on Facebook as we will be posting more breaking news items that would take up too much space on this blog.
By Andrew at 5:57 PM No comments: Links to this post

This is a tropical discussion concerning Invests 92L and 93L. What invests are: Invests are areas of concern that are not tropical depressions/storms/hurricanes, but simply a tropical disturbance that is being monitored. Today, we have 2 tropical invests that we are watching. Both are in the far east Atlantic, and they are right next to each other in a train formation. 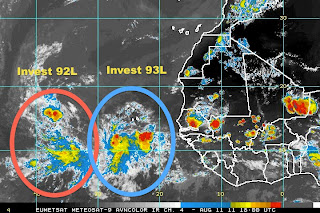 They are both disorganized and ragged, but it does look like 93L is more compact and composed than 92L, which has some convection wandering away off north. 93L has two portions of moderate to strong convection, with the big storms on the eastern flank of 93L. I do believe 93L has at least a slightly better chance of forming into a tropical cyclone than 92L at this time.
Let's check out what the models think of this. Before you see the images, think 'TS Emily wannabe's.' I have taken the liberty of marking out the invests and their names to remove confusion.
So this first image we have is from the GFS model about 102 hours away as of the 18z (1 PM CDT) model run. We see invest 92L making its way onto the scene, taking a frighteningly similar TS Emily track. Notice how the main convection is centered to the east of the center of circulation (COC) and how the COC is exposed- just like TS Emily.This next image is 114 hours away from the current time, or 12 hours from the previous image. We see some intense strengthening associated with Invest 92L, but the COC remains far to the west of the storms. With such a vulnerable COC, there's quite a big diminishment in the potential for any hurricane formation.This image is at hour 144 from current time, or 30 hours from the time of the last image. In this image, that strengthening we had seen 30 hours ago has diminished again, and the center of circulation remains exposed. This is an Emily replica, no doubt, which means we could use historical tracks of Emily. But here's the thing- for forecasters I had conferred with (at least 30) during TS Emily, all of them agreed that Emily was on the side of tougher systems to forecast. That said, it becomes somewhat unlikely that this will take the same aspects of strength, track that Emily did.
This is 168 hours out, or 12 hours since the last image, and it is a special time frame. Invest 93L has finally joined in the picture of the GFS. Notice how its convection is much more composed than that of 92L, and the center of circulation is more to the south of the main convection, giving some 'armor' to the invest. While 93L's center of circulation is still vulnerable, it is closer to the main convection, and the main convection itself is stronger.
92L is now stationed off the coast of Florida, where its own center of circulation remains horribly exposed. And while 92L may have weakened drastically, it is looking like convection may be on the rise again within the smaller invest 92L. In this whole evaluation, 92L has been swooping through the Caribbean, close to Florida. Now what? Could it hit the East Coast or fly away like Emily did?
This is Hour 192, 24 hours since the previous image. At this point, some dramatic changes are going on with both invests. With 92L, the main convection has burst out and upwards, leading the storms to try and wrap around the still exposed center of circulation.
93L's main convection appears to have finally caught up with the center of circulation (COC), thus the storm may be more composed. However, since the storm's COC is only on the westernmost fringe of what appears to be convection, it is hard to tell.
Finally, another 24 hours later from the previous image, the GFS is so long-range that it can't properly make out if the invest's centers of circulation are exposed or unexposed. However, it is able to tell that Invest 92L is quite a coast-hugger to the Carolinas area, while 93L appears to be heading in the same path as 92L, in a monkey-see monkey-do pattern.
That's all I have for you today. We will be back tomorrow morning and afternoon with discussions on these invests.
(NOTE: Long range forecasts beyond Hour 120 are considered unreliable and are unlikely to play out as anticipated. This discussion was issued in a 'heads-up' format and not in a forecasting format.)
By Andrew at 4:50 PM No comments: Links to this post

By Andrew at 3:31 PM No comments: Links to this post

Discussion... At around 11 PM- 1 AM CDT, EHI (instability and spinning index) will spike in the area noted above. At the same time, shearing in the atmosphere will appear to the tune of around 50 knots in some levels from the surface to that level in the atmosphere. However, here's the thing: that will only be happening in the Surface-to-500 millibars and no other levels. It would be ideal to have more shearing in other levels of the atmosphere. Instability will be elevated, to the point of around 1500-2250 j/kg. However, it will only be elevated in western areas of the TornadoTrack.
So, why did we put up a pretty good tornado threat? Because of the front and surface winds. Surface winds, while weak, will be haywire, and that enhances the tornado threat. That, combined with the EHI could make for a potentially tornadic situation.
Today is like one of those 'it-happens-or-it-doesn't' days. There certainly is potential, but there's also potential for this situation not to happen.
By Andrew at 4:00 AM No comments: Links to this post