A significant severe weather outbreak appears likely to unfold this weekend. The areas affected include the Plains and Midwest. We will do a day-by-day breakdown to cover the full scope of this event. 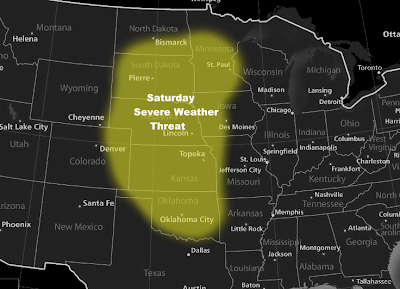 The threat area for Saturday looks to be from the Front Range east through North Dakota and Minnesota as far south as Oklahoma. Set-up appears to involve the emergence of a storm system into the Southern Plains, with a dry line positioning itself across western Kansas down through western Texas. Stationary front positioned northward and attached to another storm system in the northern Plains should allow for storm initiation and development towards evening. The Storm Prediction Center has the highest threat area centered on the western border of Nebraska and Kansas, with the highest threat appearing to be dangerously large hail. 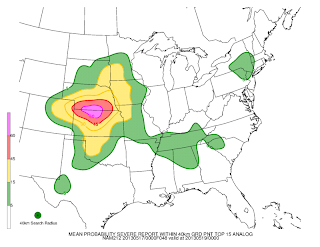 Analogs from the CIPS unit combined into a severe weather probability graphic show that it does look to be those on the Kansas/Nebraska border in the highest risk. This includes Hastings, NE into Concordia, KS. The analogs have the highest threat positioned a bit to the east of the Storm Prediction Center's moderate risk, but nonetheless, it's clear who will get the worst of this event. Additional analog products anticipate an unusually high tornado and hail threat, meaning that Saturday could hold more than some large hailstones. We'll keep a close eye on that projection. 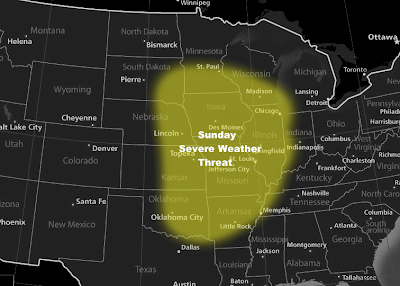 On Sunday, the severe weather threat shifts east. We see the main severe weather potential targeting those from southeast South Dakota towards Dallas and back into Chicago. The areas outlined here have a shot at getting some severe weather, but those who are really in the target zone are from southern Minnesota into Oklahoma and northwest Illinois- those on the fringes of my outlook may not receive the brunt of each day's severe weather potential. Closer analysis of the Storm Prediction Center's outlook for the last day of the weekend shows that this threat will be maximized in a plume from Oklahoma City into Des Moines. 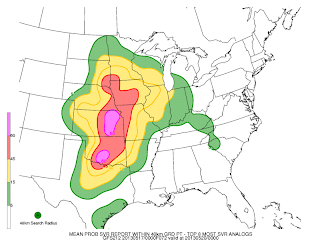 Analog projections hold Sunday's threat back out west rather than trying to penetrate the Midwest. The CIPS system has the maximum severe weather potential in spots from Iowa into Oklahoma, with prime targets found in eastern Kansas and south-central Oklahoma. What we also see is an increased threat for those in northern Illinois and even towards North Dakota to western Nebraska, even though the Storm Prediction Center does not agree. While the analog system is an excellent tool to use for storm forecasting, I have a gut feeling that the Storm Prediction Center is right with pulling the threat east, and my own outlook has been adjusted to favor it. 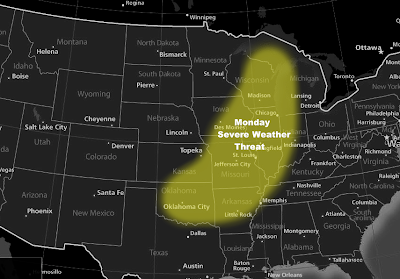 Monday is what is currently the trickiest forecasting day of the three. The severe weather threat will shift east and begin to affect the Great Lakes and interior Midwest, including cities like St. Louis, MO and Chicago, IL. It is expected that at this point the storm system will begin to transition into a closed low, allowing for an end to the severe weather opportunities. 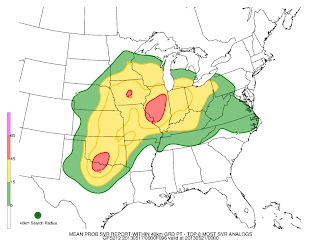 Analog projections for Monday have me on edge. On one hand, it completely disagrees with the outlook put out by the Storm Prediction Center. On another hand, multiple analog dates used to create the image above had solid severe weather outbreaks, including a few substantial tornado outbreaks. Previously, the SPC had placed Monday's severe weather threat further to the north and only today replaced it further to the south and west. I believe that we should see the risk area expand back north in correlation with the projected analogs. As the severe weather probability graphic shows above, we could have a fair severe weather event for Monday if it pans out.

All in all, I'm expecting an active weekend and start to the workweek. I expect many severe weather reports to come out of Saturday, Sunday and Monday. However, a key point is that models have recently shifted, and must be watched to ensure that this event will still play out as expected.

Andrew
By Andrew at 6:00 PM 2 comments: Links to this post