I was taking a look through some historical analogs of situations similar to the possible February 14-18 snow event, and came across an interesting fact: Set-ups with similar situations historically have favored snowfall in the Midwest and Ohio Valley regions.
This will be a description on the 'most favorable' historical analogue that fits into this storm.

During the analogue date (February 13, 2009), here were the teleconnections compared to forecasts for this storm:

PNA: -0.5
Comparison: Too Much Model Instability to Determine Comparison

Teleconnections are not that good in comparisons at this time, so this may not end up comparing to this analogue the best. But let's keep looking.
The thing I am seeing is that the general NAO forecast and analogue comparison should be at least 'fair'. This level of comparison ought to be sufficient enough to not impact the storm too much. A much different AO may make a difference, but likely just in the amount of cold air. The PNA may end up as the big player.

500mb analysis indicates that the analogue storm emerged from northern New Mexico. The forecast storm is looking to emerge from the same area. By 'same', I mean right on the New Mexico/Colorado border, just like the analogue storm.
There are some differences in relative humidities and jet stream strengths between the GFS forecast and the analogue storm. The jet stream looks like it will be weaker than what the analogue storm has in play. The relative humidity (RH) differences look to be wetter in the forecast storm, meaning some additional precipitation could be in play.
And here's what we've all been waiting for: The snowfall analogue map.
Snowfall is favored for this storm in Nebraska and Iowa.
Again, the teleconnections are not all figured out and may play a different role in this storm that is forecasted. Also, storms do not 'play by the rules' by any means, so this might not even matter in the storm's final result.

Any questions can be asked below.
-Andrew
By Andrew at 7:55 PM 14 comments: Links to this post 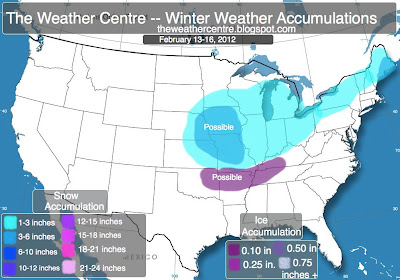 A storm system will be moving from the Plains out east, putting down snow in the Plains, Midwest and Northeast.
The storm system appears to emerge from the Plains and put down anywhere from 1-6 inches in the eastern Plains, mainly in Iowa and Missouri. This will be the high point of the storm. Although it will have access to Gulf moisture, the latest 12z GFS model indicates that 700mb relative humidity levels should be very low for a storm of this level, thus the lower snowfall amounts. There is indeed a 'possible' marking for the 3-6 inch accumulations, as the 3-6 inches may fall in scattered pieces in the area I have marked out.
There will be an icing potential in Arkansas into parts of Kentucky and Tennessee. As we approach the date of the storm I feel that the amount may have to be increased. Thus a possible denotation has been marked for the icing area.
Models are still having a bit of a time trying to handle the storm, with the CMC and GFS butting heads on placement of cold air, which will ultimately determine the biggest snows and icing zone.
Side note: Disregard the 3-6 inch region in Maine for the time being. 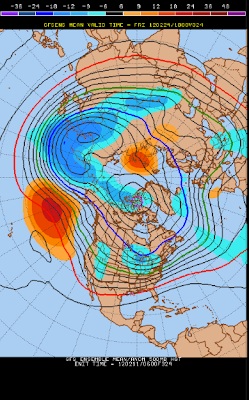 Here is a randomly selected image of today's 6z GFS Ensemble mean 500mb height anomalies. The run time does not matter. What matters is what is being shown on the image.
There is a ridge positioned in the North Pacific, right under a strong low pressure system. Occasionally, this ridge will try to make a move towards Alaska but is being blocked by the strong low pressure system. These two opposing forces appear to be sticking around for a while. What the strong low pressure system does is throw storm systems down into the US, seen by the blue areas in the US. Another thing to notice is the potential jet stream. Look closely at the eastern US. Can you see a tight area of lines? While this is the 500mb level, not the 300mb level, it can be determined that within that region a stronger than normal jet stream is present.
Let's skip ahead into March and April.
If this pattern sticks around, here is what we will see: A constant stream of storm systems being thrown at the US. These systems strengthen as they gather energy from the above-normal temp. Gulf of Mexico. The warm, humid sector out ahead of the storm, combined with a strong jet stream, would easily make for a tornado/severe thunderstorm event.
Luckily, Spring is a time of change the atmosphere goes through. The lucky part is how this change ought to break down one or both pieces of the Pacific Block (not an actual pattern name, the 'Pacific Block' I am referencing is the semi-permanent high pressure and low pressure systems).
Even so, this semi-permanent low pressure system over the Pacific will likely stay put in the Pacific and continue to throw storm systems towards the US. This continues to increase the potential for some active spring weather.
Any questions may be asked below.
Side note: The personal spring severe weather forecasts have been delayed for a little while. My apologies.
~Andrew
By Andrew at 11:44 AM 5 comments: Links to this post 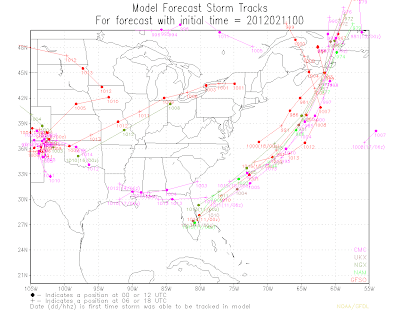 The new 0z model suite is suddenly showing something of a consensus for this piece of energy. The GFS and NOGAPS models are showing the storm going through central Illinois and NW Indiana before riding the Great Lakes and into New York. While time frames are not exactly the same (a few hours difference), that is more than expected with this long range of a storm. The models are not the only things to look at, so let's get on with the show to the ensembles. 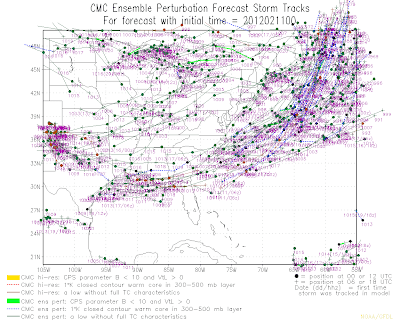 Here are the GGEM (CMC) ensembles from the 0z model suite. Some of the members are indeed showing the storm going through any part of the state of Illinois. However, most of the members are centered in the bottom 2/3rds of the state of Illinois. Because it is so far out I am not going to bite on it, but I am definitely interested with this sudden consensus. 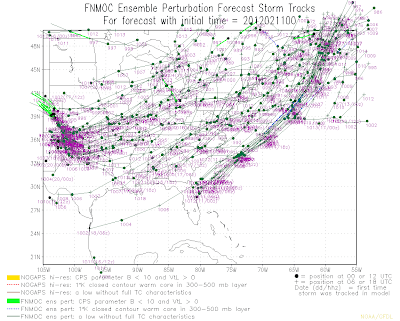 This is the NOGAPS collection of ensemble members, also called FNMOC Ensembles. Again, the NOGAPS Ensembles are showing the possible storm going anywhere from Tennessee into Wisconsin, but the majority of members are tracking the storm through South Illinois, North Tennessee, Indiana, Ohio. This is an interesting image, as NOGAPS appears to have a lot of ensemble members, and a lot of them are indeed projecting the storm to actually go through the Midwest and Ohio Valley. 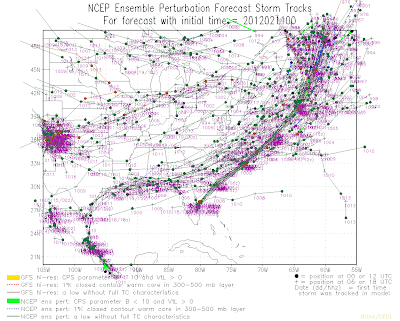 Finally, here are the 0z NCEP Ensemble members. They are a little more cautious than the NOGAPS Ensembles, with some members taking the storm through all of Illinois, north Ohio. The 0z GFS is once again showing the storm going through the Midwest and Ohio Valley, but now much weaker. This may be what I have seen the models suddenly go south with a storm but eventually re-emerge the storm north to where it was originally forecasted to go. That does not happen every time, but has happened before.

You may ask questions on if you will get snow as I am feeling more confident than yesterday with this new possible consensus.

Northeast Great Lakes Could Pick Up 4 inches of Snow Today

(Accumulations are in millimeters, so click here for a millimeters to inches converter.)

As an arctic cold front moves out of the East US, the lake effect snow machines are kicking into high gear. The Northeast in general should see about a half inch to 2 inches- nothing major. However, closer to the Great Lakes, this particular model is forecasting up to 80 millimeters, or just over 3 inches, for western New York.
By Andrew at 9:14 AM 3 comments: Links to this post