We're going to take a look at the forecast for the El Nino Southern Oscillation (ENSO) phenomenon for the Winter of 2014-2015 in today's post. 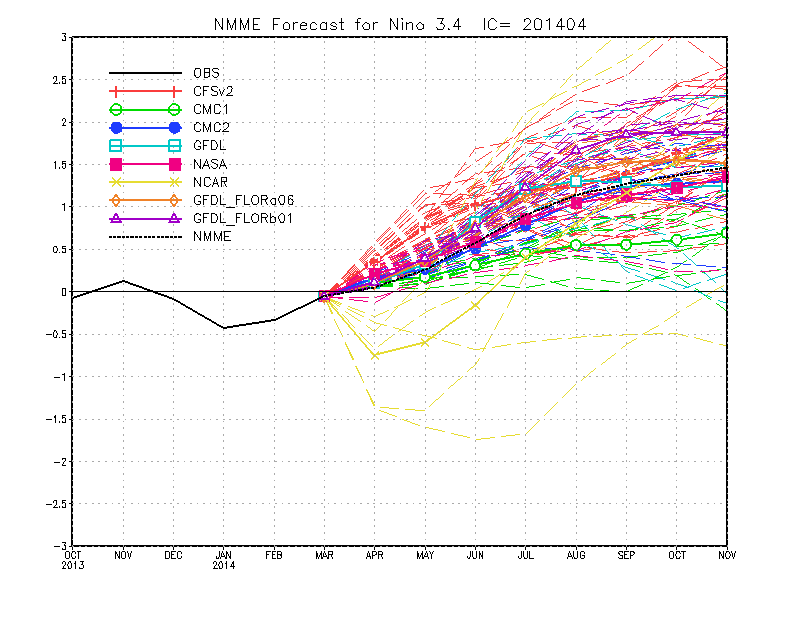 The image above shows a composite of multiple global modeling systems, and their projections for water temperature anomalies in the eastern Pacific. In this forecast, we see the heavy majority of the pictured models preferring to rapidly warm the East Pacific over the summer, as we see the general linear trend from neutral-ENSO temperatures (anomalies nonexistent, near zero) to a moderate El Nino (anomalies of +1C to +1.5C) from now until August. Beyond that point, the model guidance and ensemble members begin to diverge and lose their consensus, but there does appear to be quite a bit of room for a strong El Nino (+1.5C or higher water temperature anomalies) to form later on in the fall.

So, with an El Nino expected heading into the fall, what if it continues on into next winter?

If we look at the image above, we can get a good idea of what temperature anomalies may be like for the upcoming winter due to the El Nino. This image shows you the probability of extreme warm or cold winters during El Nino years. As the image shows, the North US experiences a higher chance of an extreme warmth winter, while the South sees their risk for an extreme cold winter rise. Thus, we can anticipate that the North might see a warmer than normal winter this year and in to 2015. However, that will be looked at again later this year.

If we check out a similar graphic for precipitation anomalies, we get a feel-good story. The West US, currently suffering through one of the worst (if not the worst) droughts on record, typically experiences a wetter than normal winter during El Nino winters. The winters near Montana are typically a bit drier than normal when in an El Nino state, and this is also found along the Ohio Valley. The Plains and East Coast then tend to see wetter than normal winters. This spells good news for not only winter weather fans in the East, but those hurt by the drought in the West.