This is a pattern discussion which will highlight my thoughts for the short range period, the medium/long range period, and the long-long range time period into February. 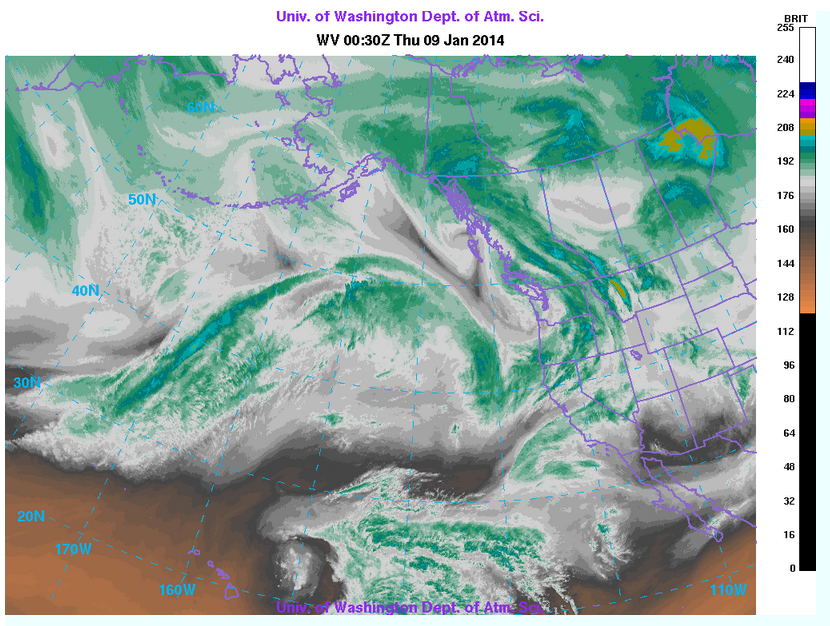 Satellite imagery last night showed the development of a Kona Low just north and east of Hawaii, as the swath of enhanced water vapor shows in the bottom center part of the satellite image here. Satellite animation shows that this Kona Low is already flexing its muscles, inserting its moisture into the subtropical jet stream. The Kona Low typically not only enhances the subtropical jet stream, but also strengthens the chances of a negative Pacific North American (PNA) pattern, which involves stormy conditions in the West US and high pressure in the Central and Eastern US. This development of the Kona Low jives well with the predicted weather pattern in the next week or so, which should involve that stormy weather in the West US and quiet, warmer weather in the nation's heartland and along the East Coast.

This warmer weather will be weaving in an out of occasional storms and cool shots, as the Pacific jet is starting to rev up near the Gulf of Alaska. As the jet stream starts to head towards the nation, water vapor imagery tells us we can expect some storm systems to hit the west coast of North America in the next few days, and medium range ensembles agree, bringing a storm into the Central US in the next 3 to 4 days, and also bringing a second storm system ashore in southwestern British Columbia. It is this second system where we will find ourselves reverting back to the pattern that just brought us record-breaking cold as the polar vortex swiped us to the north.

The GFS Ensemble guidance believes we will see a piece of the prevalent polar vortex (shown above as being located in northwest Canada on January 12th) break off and begin to push southeastward into the United States. This piece of the vortex will force weak ridging located in the Central US out of the way, which will allow that polar vortex to push east. At the same time, as the piece of the vortex pushes east, we will see that suppressed ridging in the northeast Pacific (which looks to be putting up a very impressive Pacific jet stream) shift eastward, and actually form another situation where high pressure intensifies along the West Coast. This ridge intensification then permits the piece of the polar vortex to deepen and slow down, as the West Coast ridging tries to create a blocking situation.

By January 15th, we can clearly see the situation I described above, with the ridging intensifying along the West Coast and allowing the piece of the vortex to deepen and press further south. However, this event will be different than the one we went through earlier this workweek. When this next cold outbreak comes along, high pressure will be more suppressed and placed more to the east than before. This looks to be a consequence of that intense Pacific jet stream, which will allow high pressure to extend east and actually prohibit certain parts of the Rockies and Plains from getting in on this second wave of cold weather. Because of that eastward propagation of the ridge, I think we will see the Central Great Lakes into the Northeast really get in on this cold outbreak, with the western Plains and parts of the southern Plains getting snubbed by high pressure.

The next item to discuss is that January 17-21 potential Colorado Low / Panhandle Hook storm. If you recall, I have been touting this idea of a storm system for a while now in recent posts.

The pattern in the couple days prior to this time period looks a lot like what you see above, but another piece of the vortex looks to break off and deepen again in the Central and Eastern US to provide another cold weather opportunity. This storm will really depend on where high pressure will be located in the Western US, and how it will affect potential high pressure development off the East Coast. If we see the ridging centered more west, I can see better potential for this Colorado Low / Panhandle Hook storm verifying. However, if it is centered more to the east, the storm might not be able to pull off its act, as ridging may overpower it. Model guidance is pretty cloudy on just how this event will evolve, so right now I'll leave it as the storm being possible. I had previously had higher confidence, and still do in the sense that there will be some wintry weather in this timeframe, but location issues of this possible storm mean that this high confidence is somewhat reduced.

Confidence is reduced because of the projected East Asian weather for January 12th. Knowing that a storm in East Asia results in a storm in the US 6-10 days later, we can use that January 12th Japan storm that is shown above to project a storm in the timeframe of January 18-22. That falls right in the other timeframe for this storm. The reason my confidence is reduced in addition to the potential ridging issues is because that Japan storm is pretty far north in the country, almost to the north of the country itself. This may indicate that our storm system between January 17-22 may actually be more to the north than we thought. I'm not going to jump to conclusions, just something to ponder. 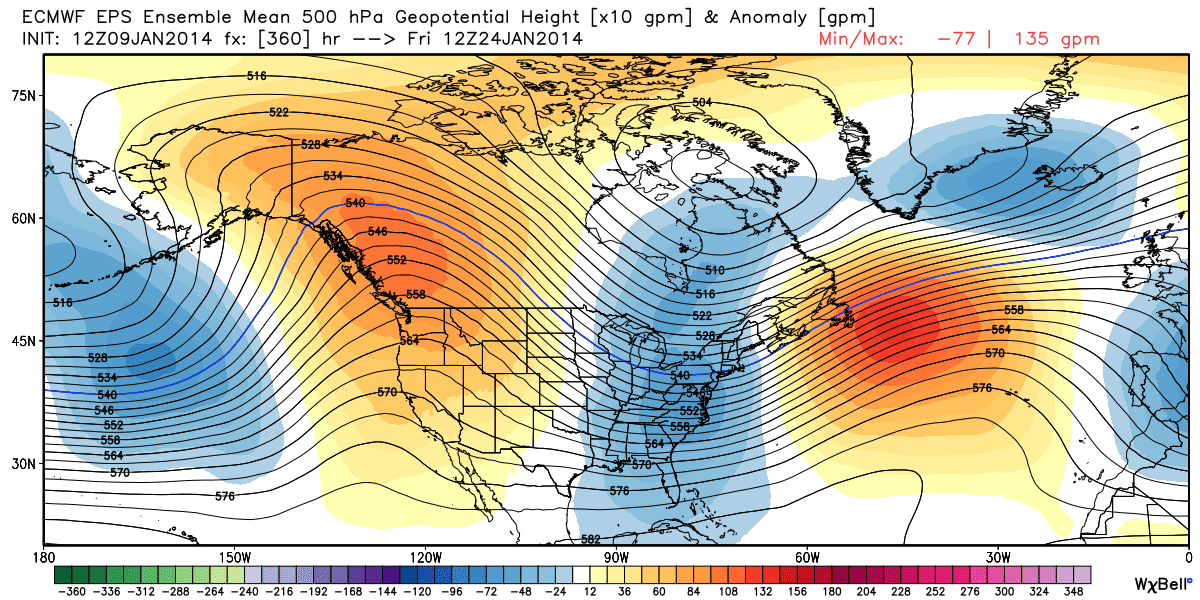 ECMWF Ensemble 500mb height anomaly guidance for January 24th shows us that the nation would be in for a cold but progressive weather pattern. This is exhibited well by the intense ridging along the western Coast of North America into the Gulf of Alaska. That intense ridging is the same high pressure pattern that made the environment conducive for a brush with the polar vortex earlier this workweek. However, we see some stormy weather just to the east of Greenland, and that tells me that the chances of seeing prolonged cold outbreaks and persistent west coast ridging are low. When you have stormy weather near Greenland, it results in a positive North Atlantic Oscillation (NAO), which means the pattern wants to keep everything moving west-to-east, not letting any high or low pressure system staying in one place for a long period of time. Thus, I expect we will see a cool end to the month, gradually easing up as the upper stratosphere has been cooling recently.

I have also been talking about a January 24-28 winter storm that may be either an Apps Runner or Nor'easter per my latest post. Now, we can add onto that with new data.

This image shows observed weather on November 27th. We can use data from the past to predict the future by utilizing the Lezak Recurring Cycle (LRC). The Lezak Recurring Cycle, or LRC, is a tool developed by meteorologist Gary Lezak that, in essence, can enable forecasters to predict the overall weather pattern months in advance. The gist of the LRC involves a cycling weather pattern that develops in October and November of each year; no pattern is the same from year to year. Around mid November, the LRC begins to repeat, meaning we start to see a similar weather pattern in mid November that we saw in early October. This means that the cycling pattern has begun, and it will continue to cycle on a regular 40-60 day interval for the next ~10 months before it dissipates over the following summer. Considering this LRC season cycle length is 57 days, give or take a day or two, we can extrapolate November 27th out 57 days to get the reoccurrence of this coastal storm system. When we go ahead 57 days from November 27th, we arrive at January 23rd. And if you look closely, you'll find that it matches right up (off by a day, but who's counting?) with the January 24-28 timeframe for a coastal storm. Considering we have support from multiple indices at this point, confidence continues to grow for a late January coastal storm. Unlike some uncertainties with the Panhandle Hook storm, this East US storm looks more promising with this new data.

As we head into February, I'm thinking we will continue on the road of gradually easing out of the cold weather pattern we will have been in for much of January. Despite this, long range indices tell me we could see some continued stormy weather, and I'll be monitoring that potential in coming days and weeks.

An early Super Bowl forecast: Be on the lookout for a storm system on the East Coast in the couple days after the big game. Depending on the Pacific pattern, some cold air may be available to sweep east into the Northeast if an early February coastal storm does come to fruition.