It should be noted that some information posted here is from yesterday's Sandy update. I repost it only because the information is still valid.

Tropical Storm Sandy has strengthened to a Category 1 hurricane as she moves a steady northbound track at this hour. Sandy has prompted hurricane warnings to be issued for much of the western Caribbean, with Florida also getting into the action. A tropical storm warning is in effect for the eastern coast of Florida, with a tropical storm watch surrounding that warning. With all the controversy swirling around Sandy, I still maintain my case that Sandy will pose a threat to the East Coast, and here's why:

The first thing we must examine is teleconnections. Above is a multi-model display of the 0z models and ensembles' predictions of the North Atlantic Oscillation. The North Atlantic Oscillation, or NAO, has two phases: positive and negative. In the negative phase, a colder and stormier pattern is encouraged over the East US as the jet stream dips south. In the positive phase, warm conditions can be found in the East.

Models are forecasting the NAO to stay well in negative territory, possibly well into November, but that's another story. The key piece is that the NAO will be extremely negative from now until October 27. Because teleconnections observations and their effects are delayed (the atmosphere doesn't work that fast), we want a good 3 day lag of negative NAO values before the storm strikes to show that the NAO would support such a possibility of an East Coast threat. Looking at the NAO forecasts, there is a good consensus on such a negative period through Halloween, which will enable the jet stream to dip in a negative NAO pattern. This provides a base for a theory on an East Coast threat. 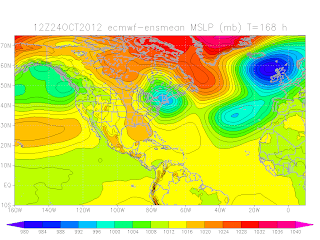 Shown above are the ECMWF Ensembles on top and the GFS Ensembles on the bottom. Both are from today's 12z model suite. As you can see, both indicate that a strong system will hit the Mid Atlantic in the days leading up to Halloween. The two ensemble sets are pretty similar in forecasts- both have a strong storm crashing into the Mid Atlantic, and this situation would indeed pull down very cold air as the GFS ensembles depict on the lower image.

I believe that an ensemble set always triumphs over a single model. Why? Well, imagine the ECMWF model. It's a great model, very reliable, a very good model overall. Now imagine that same ECMWF model, but now there's 52 of them, combined into one overall forecast. It sounds too good to be true, almost like a sure-fire forecast (for the record, that's nearly impossible, no matter the model). That sums up what the ECMWF ensemble system is. The same goes for how the GFS Ensemble system works.


As the storm moves north (likely influenced by both the strong cyclone to the northeast and the advancing disturbance to the west), it has two options, which is the key player that is confusing the models. Here is a breakdown of each option.

Option 1: The storm moves north and is coaxed east by the strong disturbance located to the northeast in the image above. The storm keeps moving northeast and does not affect the US mainland.

Option 2: The storm moves north, but is more influenced by the disturbance in the Ohio Valley. The Fujiwhara Effect comes into play, and Sandy cycles to the west to orbit with the incoming disturbance over the Ohio Valley. This cycling persuades Sandy to move towards the US and make landfall. Personally, at this point in time, I am favoring Option 2.


I've run over the model forecasts and weather theories to give my first (but certainly not last) forecast on Sandy. Keep in mind that she will be EXTRATROPICAL (not a hurricane, but a strong coastal storm like the ones seen in winter). However, this does not mean that the tornado threat will be nil- such a post-tropical cyclone can definitely produce some tornadic activity. 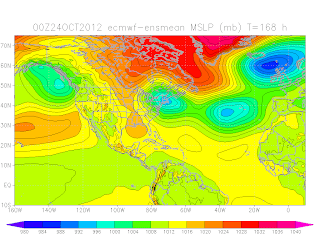 Above, you see the GFS Ensembles on top and the ECMWF Ensembles on bottom, forecasting MSLP values in the Atlantic. They are both valid for 7 days from now.

The ECMWF Ensembles combine to believe that a strong system will make landfall in the Mid-Atlantic, with heavy winds and rain following along. I do not doubt the presence of some snow in the Ohio Valley from this system as well if the ensembles give enough cold air to the west of the original landfall.

The GFS Ensembles are even stronger and also hit the Northeast with Sandy at a strength in the 980's, indicating that the system looks to be pretty strong. It should be noted that for both sets of ensembles, some members are stronger than this, and some members are weaker than the forecasts above. This is a mean (average) of all of the ensembles within the GFS' base or the ECMWF's base.

I show you these forecasts because the models themselves may as well be as good as a life raft in the desert- sometimes it's practical (for shelter), sometimes it's not (there are no oceans in the desert). I think it's time to take a few steps back and see what the ensembles have to offer, because they are the best bet at this long range forecasting of a tropical cyclone.

Andrew
By Andrew at 6:43 AM 8 comments: Links to this post