The potential is on the rise for a winter storm between the December 7 and 11 timeframe.

Ensemble forecasts place some stormy weather around Japan in time for the first day of December, as a major pattern shift in the Pacific gets underway.There is a known correlation that indicates storm systems or ridges of high pressure over East Asia can be reciprocated in the United States 6-10 days after the event's occurrence in East Asia. Thus, seeing the potential for a storm system in Japan on December 1st, it would be assumed that December 7th to the 11th is the timeframe for a potential winter storm in the United States.

Adding to this potential winter storm system's credibility is the Lezak Recurring Cycle. The Lezak Recurring Cycle, or LRC, is a tool developed by meteorologist Gary Lezak that, in essence, can enable forecasters to predict the overall weather pattern months in advance. The gist of the LRC involves a cycling weather pattern that develops in October and November of each year; no pattern is the same from year to year. Around mid November, the LRC begins to repeat, meaning we start to see a similar weather pattern in mid November that we saw in early October. This means that the cycling pattern has begun, and it will continue to cycle on a 40-60 day interval for the next ~10 months before it dissipates over the following summer. Now that we are in late November, we have already begun to enter the next cycle of the LRC. There was a storm system that moved through the Plains and Midwest from October 14th-15th, which brought precipitation to those regions. Now, roughly 57 days later (the approximate length of the LRC cycle this season), we are looking for this storm to come back around December 10-12. This places it just outside of the timeframe set forth by the East Asian correlation, but I have a feeling that the two ought to combine in this case to produce the winter storm chance.

Going strictly by the LRC, one would expect the Plains and Midwest to get this storm system again. But, if teleconnection forecasts verify at their current projections, it's possible the system goes further north than it did in mid-October, or gets caught in the subtropical jet stream and stays to the south. I personally prefer the upper Plains-upper Midwest track, but in this case, time will tell.

Andrew
By Andrew at 8:41 PM 4 comments: Links to this post

As the image above shows, there will be a rather deep area of negative height anomalies over East Asia for November 28th, as exhibited by the dark blues in the top left of the left-hand panel. There is a knwon correlation that indicates storm systems or ridges of high pressure over East Asia can be reciprocated in the United States 6-10 days after the event's occurrence in East Asia. As we see a stormy period begin in East Asia over November 28th, I would expect December 4-8 to be the timeframe for a winter storm in the US as a result of this East Asian correlation. There are already a couple of guesses put out by the ECMWF control run. The most recent forecast has an absolutely colossal trough emerging over the Plains, possibly of historical proportions:

This geopotential height anomaly forecast from the ECMWF ensemble control run has this massive trough really ramping up between December 4-5, before getting to its peak on the evening of December 5th. The sea level pressure forecast for this storm would put it below 980 millibars, meaning this potential storm system would have a MSLP value in the 970mb range. That is the equivalent of a Category 2 hurricane, judging solely by MSLP values.

Just as a little eye candy, here's the snowfall forecast from that mega-storm forecast. USE WITH CAUTION!!

It's looking like early to mid December will be very cold, and quite possibly snowy across much of the nation.

Relative atmospheric angular momentum values for the last couple of months tell the story, as we have seen an emergence of positive AAM anomalies above the 60N latitude mark, as shown by the yellow blob near the top right part of the image. Without going into the technical aspect of the AAM, it is known that positive AAM anomalies above the 60N latitude line, with -AAM anomalies below that parallel can lead to favorable winter weather conditions across the country. In this case, a recent spike in AAM anomalies across the upper latitudes is now leading to the emergence of ridging near the Arctic, as I will show later on in this post. The -AAM anomalies persist across the mid-latitudes, confirming the suspicion that wintry weather will be here to stay for a little while.

The GFS Ensemble forecast for the AAM over the next couple of weeks reiterates the trend we have been seeing, with negative angular momentum anomalies keeping a tight grasp on the mid-latitudes in the days ahead. Positive AAM anomalies are projected to dissipate, but the aforementioned -AAM persistence in the mid-latitudes should keep at least a slightly wintry gun aimed at North America. East Asia is projected to be rather stormy over the next handful of days into the latter part of early December. As I've mentioned on this blog, weather anomalies over East Asia have been found to affect weather in the United States 6 to 10 days after the occurrence in E. Asia. This means that when stormy weather hits Japan, it can be expected that stormy times will greet the US just 6-10 days later. The ECMWF ensemble system has been predicting that Japan will encounter some rough weather in the next couple of weeks and slightly beyond. This includes the passage of potentially several storm systems. If correct, this would greatly raise the possibility of snowy weather turning up in the United States just a few days later. It's a little too early to eye particular dates for this East Asian / US winter storm correlation, and it may be a little while before this stormy East Asian projection still holds value on the ensemble forecasts in a few days. 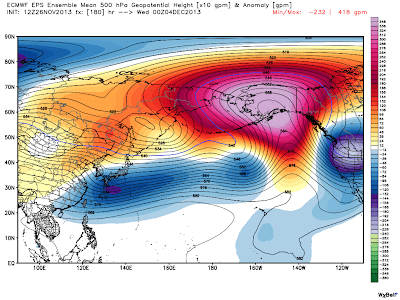 Now, this projected East Asian storminess will come as a massive shift in the Pacific gets underway. It is predicted that a huge ridge of high pressure will take up residence in Alaska and the Gulf of Alaska in the opening week of December. This ridge will then transition to an Omega Block pattern, which forms an atmospheric pattern not unlike that of the Greek letter Omega, as the illustration below shows.

This Omega Block in the Gulf of Alaska will really dominate the northern Pacific during its tenure in those waters. The ridge is expected to develop gradually until it finally bursts north and actually penetrates into the upper latitudes. With the presence of such a strong ridge, deep negative mid-level geopotential anomalies will develop in the Western US. This means that cold weather will be a prevailing feature for the West US into the Plains, as well as the Midwest, Great Lakes, Central and Southern Plains regions in conjunction with the teleconnection pattern, which we will discuss later. 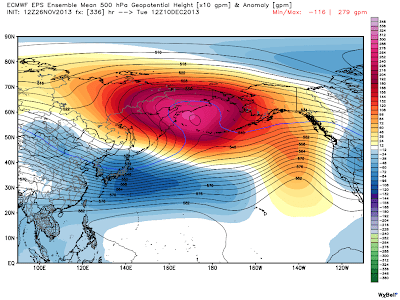 Nearly a week after the ridge takes up residence in the Gulf of Alaska, the ECMWF ensemble prediction system (EPS) indicates the ridge will retrograde west and into the Bering Sea, still remaining in an Omega Block formation. This Bering Sea ridge may actually try to work out a Rex Block pattern with East Asia, where ridging in the Bering Sea may slide west further and provoke negative geopotential height anomalies across East Asia in typical Rex Block fashion. If that were to play out, East Asia would get pretty stormy, and as we discussed above, this would have stormy implications for the United States. However, because this is all long range in nature, I won't speculate too much on that potential. The ensemble set predicts that troughing will persist in the West US, and that would be a byproduct of another ridge popping up in the eastern Gulf of Alaska. This feature will determine if the Bering Sea ridge will transition to a Rex Block or remain an Omega Block. If it does go into a Rex Block, the ridge will slide westward, and the Gulf of Alaska ridge, should it be a separate entity, would allow troughing in the West US to continue- a bad sign for US winter weather folk. However, if it keeps its initial Omega Block form, ridging in the Gulf of Alaska should dissipate and instead be replaced by negative geopotential height anomalies. This would produce a favorable winter weather pattern for the US. This is all to be determined, and I'm not willing to go beyond analyzing the possibilities for diagnosing this particular situation. 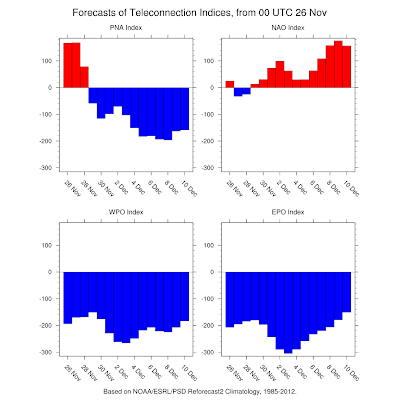 Coming out of this massive ridging in the Pacific will be a very negative West Pacific Oscillation and East Pacific Oscillation, nicknamed the WPO and EPO respectfully. The two indices are very closely related, and they should react very similar when this Omega Block ridge begins to spread its influence across the Pacific. When that ridge forms, the WPO and EPO are likely to maintain their negative phase, as the negative phase of each index calls for ridging across the Pacific. The -WPO and -EPO also call for cold air to hit the West US, and then bleed east into the Plains and Midwest, before finally reaching the Mid-Atlantic/Northeast and Southeast. With the massive ridge in the Pacific producing the troughing in the west, it all looks primed for a textbook -WPO/-EPO response, with dramatic cold weather anomalies in the Plains that modify and push east with time. To summarize, this late November cold weather is only a sliver of what's to come.

Long range analogs created by the Climate Prediction Center and the GFS ensemble system confirm the idea that this Pacific ridge will create some very cold weather in the West US and the Plains, but also hint that it could set up some cross-polar flow for North America. What is cross-polar flow? When a ridge like the one we are discussing now sets up in the Pacific, it can shoot north and push the jet stream way north, even into the Arctic Circle. The jet stream carries cold Siberian air eastward as usual, but rather than send it towards the Bering Sea, the ridge in the northern Pacific bumps the jet stream north and then south, into North America. In a nutshell, a cross-polar flow event is the motherlode of cold weather, so to speak. If the analogs are true and the Pacific ridge can sustain itself at such a magnitude, then this cross-polar flow idea is a valid one in the long range.

Early and mid December is the prime target for some brutally cold weather, along with a side of snow potential. Just how cold and snowy it will get remains to be seen, but it's true: the potential is there.

Andrew
By Andrew at 6:12 PM No comments: Links to this post