This is something I want to clear the air about.
This horrible winter pattern IS NOT- I repeat, IS NOT- due to global warming.
This is just a really horrible pattern that just happens to become reality during the big eco-friendly push.
Believe me- I thought it was global warming. But after intense investigation, I discovered that this is simply a bad weather pattern.

I have seen many people blame global warming due to the intense lack of snow.

If global warming caused this, I wouldn't be talking about a pattern change, because the entire earth would be too warm for snow.

If global warming caused this, snow wouldn't be exactly favorable in winter because the warming would have killed off the cold. The cold, by the way, is up north. Way up in the North Pole.

Check out the temperatures way up by the Arctic Circle- Tuktoyaktuk, Canada. 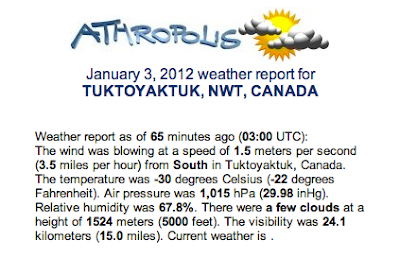 As you can see, the cold is simply being stored up north.
By Andrew at 10:12 PM 6 comments:

For 1 hour, you can ask as many questions as you want regarding this winter, and have them answered by me.
Here's some examples for possible questions:

Anything you can think of that has to do with winter you can ask.
We will answer as many questions as we can.
So here's the details.

FAQ
How many questions can I ask?
-Unlimited.

Will all of my questions be answered?
-We will try our best to answer as many as we can, but as soon as it's 1:00 PM CST we will not be answering any more questions.

Stay tuned for more details!
By Andrew at 3:54 PM 1 comment:

There is some actual significant stratospheric warming occurring right now. You can see just how high the 1mb, 2mb, 5mb levels have risen, with the 1mb, 2mb levels getting quite close to the 'maximum' level of the past few decades.
What does this mean? A pattern change, of course! When you get significant warming like this (not like the other little 'bumps' of warming- this is the real deal), there's a confident assessment that the pattern will be changing. We just need to have this warming propagate down to the lower levels of the stratosphere, where some more influence matters.
We will have more information on this as it develops!
By Andrew at 6:39 AM 16 comments:

Update to: 'Major Snows for the Country Not Out of Question'

In the post above, I discussed how a -PNA may hamper efforts to get the Siberian Express and the Pineapple Express. Well, I did some research and came across something that I originally knew but forgot about: If the PNA (or any indices, for that matter) are in a weak positive/negative stage, the effects of that stage are also weak.I don't know how I missed that, but I did. Here's the bad thing: That doesn't apply to this scenario. Here's the latest PNA forecast. 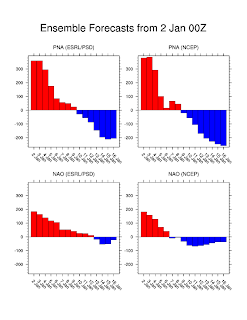 The negative end is not a good sign- and it's at least moderately strong at that. We might still see the effects, but this cold air is something we just cannot deny. The pole vortex cannot hold up under the constant intrusion of ridges into it, which is what is playing out. We are about to issue a stratospheric warming update, so stay tuned.
By Andrew at 6:30 AM 2 comments: