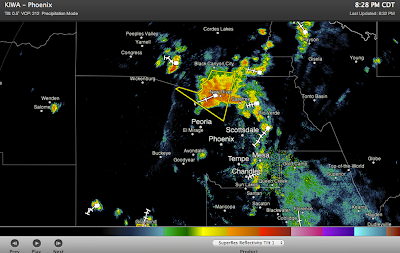 By Andrew at 8:33 PM No comments: Links to this post 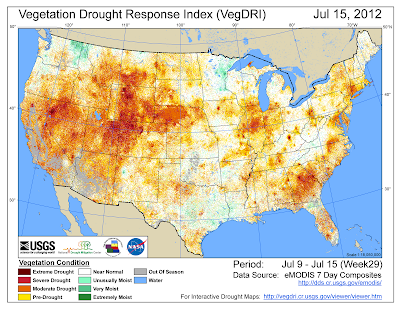 The Vegetation Drought Response Index, or VegDRI, is showing that the Midwest agricultural hearth is suffering at the hands of a mostly unrelenting drought ongoing across the region.

VegDRI is showing of 'Moderate Drought' conditions prevalent across mich of Illinois and Indiana into Iowa, with conditions even reaching into 'Severe Drought' levels across central Illinois. This is an important development, as groceries you buy will likely see potentially dramatic price increases over the next 12 to 24 months in response to this drought, similar to throwing a stone in a lake. The stone is the initial drought, and the ripples from this stone are the effects of the drought that branch off into a wide spread of areas with time, including food and commercial products.

A glance at short term drought forecasts indicates that this is not likely to let up anytime soon, and the drought (and price increases) should continue for at least some time to come.

Andrew
By Andrew at 7:48 PM No comments: Links to this post

A couple days ago, two areas of severe weather potential were outlooked by the Storm Prediction Center at very long range dates. Since then, the SPC has not put out outlooks with those dates being specifically delineated on the long range graphics. That said, let's take a look at where things stand now. 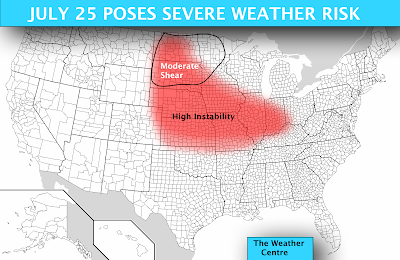 July 25 is looking OK at this point in time, with the GFS portraying a wide area of instability across the Plains into the Midwest. While I did mark high instability into the northern Plains, the highest instability will be located in the Central Plains and Midwest.
Some light to moderate shearing should be in place over the northern Plains if the latest GFS run holds up. I have a feeling that, due to the potentially scattered nature of this shearing, it looks like that some pulse cells may be more supported by high instability and little shear. However, in pockets of this shearing, a mesoscale convective system (MCS) could form thanks to elevated instability and fair shearing pockets. 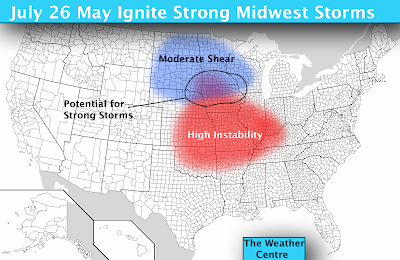 As for July 26, there should be an increase in both strength and coverage of this light to moderate shear, which could reach past 40 knots (sfc-500mb) on this day. The high instability will most likely be displaced to the south as a cold front attempts to interrupt the party. It should be noted that some fair instability exists in Minnesota and Wisconsin on the order of 2000-3000 j/kg, but was not marked in favor of marking the higher instability over the Plains and Midwest, where 4000 j/kg+ of instability will exist.
The battle ground of shear and instability appears to want to exist from the Midwest into the Upper Midwest, specifically from Iowa into Wisconsin and Minnesota. Some more pulse cells appear possible farther south into the Central Plains and Midwest, but there is potential for an MCS to fire in the circled area.
Andrew
By Andrew at 10:02 AM 2 comments: Links to this post