Over 400 earthquakes hit the town of Brawley, California in the last seven days, many of which coming from the last 48 hours.

There were several earthquakes, the strongest of which measured approximately a 5.5 on the Richter scale. There have been no reports of severe damage or severe injuries, but small damage to household items has been reported (broken shelves, etc.).

If you are in an earthquake, quickly gather a prepared bag of emergency supplies and head outside to avoid possible falling debris from your house. Gas leaks and other dangerous broken pipelines can pose a serious threat to life.

Isaac Running Out Of Time; Storm Surge A Real Threat

Isaac is running out of time as far as strengthening potential goes. He is at tropical storm strength at the moment, and has been for quite a while. Strengthening has been much slower than what had been anticipated, and this is already bumping down strength potentials for Isaac. Let's look at what Isaac looks like now. 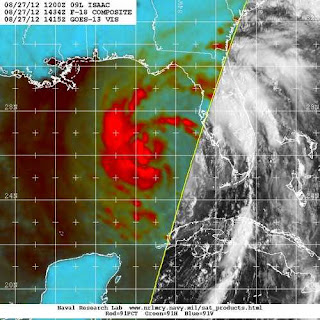 Isaac has a very well developed western flank, with strong convection forming a neat eyewall and clear rotation evident within the structure. However, the right side of the storm is much weaker, with little to no reinforcement around Isaac's eye, and leaving the center of circulation practically open to the world.

Recent satellite looping indicates that Isaac continues to strengthen, but why has he not significantly strengthened as was expected? 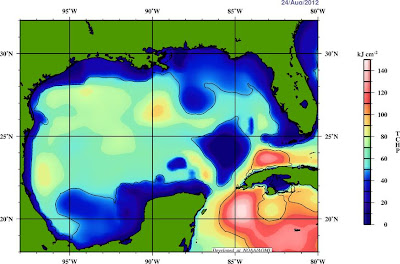 This is a big part of it- Tropical Cyclone Heat Potential anomalies. When you have warmer colors on the map, that shows warmer waters are present and better for tropical cyclone formation and strengthening. However, where Isaac is now, he is in an area that is not exactly the best when it comes to supporting strong hurricanes. This, combined with persistent wind shear and dry air, has helped hamper Isaac's strengthening. 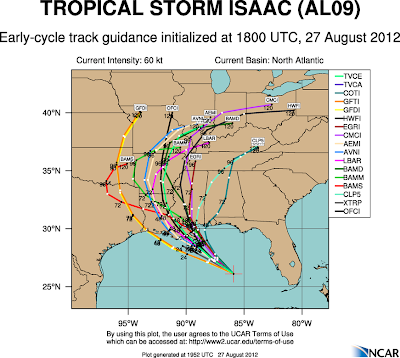 Latest models indicate the movement of Isaac into southeast Louisiana, right into New Orleans, as a hurricane. The latest model guidance shows a Category 1 hurricane making landfall on New Orleans, but the threat is far greater than that.

Isaac is, and has been, a very large storm. It has tropical storm force winds extending quite a ways from its center. What this brings me to is the concern of some heavy-duty storm surge. Take a look below at the storm surge forecast from the NHC. 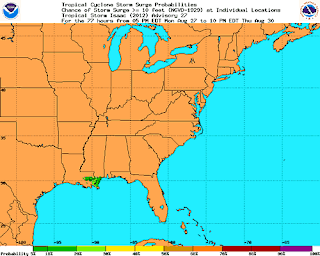 This is a probability of storm surge above 10 feet. While the percentages are low, keep in mind that it is quite significant to even see a chance show up on here. Remember that New Orleans is barely above sea level, thus intensifying impacts even further than what those several hundred feet above sea level may think. Here is a forecast from the Ocean Prediction Center for storm surge. 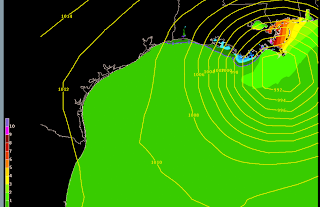 This model from the OPC is indicating storm surge may go above 10 feet right up against New Orleans. This only continues to ignite concerns for a potentially major flooding event. Isaac is indeed large, so rainfall could be quite large as well.

I will keep you posted before, during, and after landfall.

Andrew
By Andrew at 4:43 PM 2 comments: Links to this post