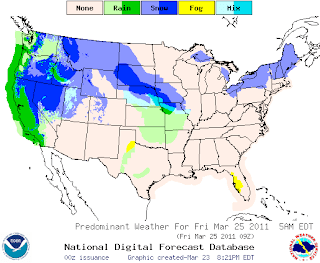 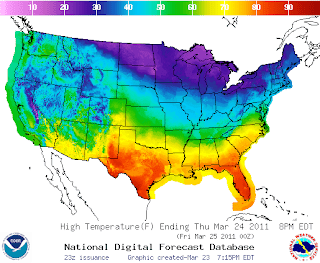 (This is a redesigned Forecast Discussion.)
FORECAST DISCUSSION
The above image is obviously new, and it is directly from the NOAA. We will display the predominant weather and temperatures instead of other stuff that is hard to understand. The images are 24 hours out from now.
Let us begin.
A minor snowstorm in a pattern of unsettled weather will occur in the Plains. In this image, this could be a potential for a maximum of a couple of inches of snowfall accumulations. Additionally, temperatures will hover around 30, so some transitions will happen around the beginning of the storm. Below the mixing area, some light rain will occur. The mixing area will be somewhat dangerous, with freezing rain being a potentially dangerous issue. Will have to watch for this.
Some light snow will continue in the Northeast with temperatures around the 20's.
Down in the south, all should be well with temperatures into the 80s. There will be some sprinkles and fog.
There will be a major West Coast storm igniting fears of flooding and landslides. Rain in the lower elevations and snow in higher elevations.
By Andrew at 7:44 PM No comments: Links to this post

At this time, a large tornado watch has been issued. See below for the imagery of radar and the watch box combined.

This watch is effective until 9 pm EDT/8 pm CDT. The storms pictured above will be on the increase as the chance for supercells increases throughout the day. Check your local radar for information on this developing storm.
By Andrew at 1:31 PM No comments: Links to this post

There will be a severe weather outbreak over the Ohio Valley today.
The Storm Prediction Center has upped the risk to Moderate in the Ohio Valley, indicating the storms will be worse or more widespread than previously thought. Either way, today is definitely a day to monitor.
First, we will start off with the Storm prediction Center's overall risk.

Above we do see that area of moderate risk in the Ohio Valley, pretty much centered in East Kentucky and West Virginia (the state West Virginia). There is also a slight risk of severe storms surrounding that moderate risk through the rest of Kentucky, Tennessee, Virginia, Ohio and Indiana.
Based on the formation of the risk areas, I do not believe this will be a squall line. Rather, pop-up storms combining into a multi-cell storm complex seems most reasonable.
Next, let's check out the specific risks.

This above image is the tornado outlook. Let's do a comparison. Yesterday, Iowa had a 10% chance for tornadoes. As a result, around 16 tornadoes occurred. Comparing that to a broad area of 5% would indicate that there does appear to be decent potential for scattered tornadoes. I cannot rule out one stronger tornado. Next, we will take a look at the hail risk.

This hail risk was the single threat to ignite the moderate risk area in the first image. The 45% area indicates that widespread damaging, large hailstones will fall. The hatched (dashed lines) area also indicates that. Based on the fact that a lifting mechanism is needed to produce hail, it can be assumed that a strong lifting mechanism will be in place to produce such hail. Next image will be damaging winds.

The wind risk, although large, did not set off the moderate risk in the Ohio Valley. As mentioned above, a strong lifting mechanism in the clouds will be lifting up raindrops over and over again to produce hail. In some cases, strong wind bursts called downdrafts will come out of the clouds. Another name for this is a microburst, but the correct term is downdraft, due to the potential for a broad area of the downdraft. Anyhow, that lifting mechanism may release damaging wind downbursts and/or create strong surface winds due to the strong lifting in the atmosphere.

Other Concerns...
The Storm Prediction Center's outlook indicates supercells and fast moving line segments will develop. Notice how I said supercells with an S. The SPC does expect multiple cases of these to develop. Supercells produce tornadoes in the first place, so this enhances the tornado threat.
Also, CAPE values could rise to 1500 j/kg, just under the 2000 j/kg typical of the threshold for producing severe storms.
Any updates on this situation will be posted as warranted.
By Andrew at 9:55 AM No comments: Links to this post