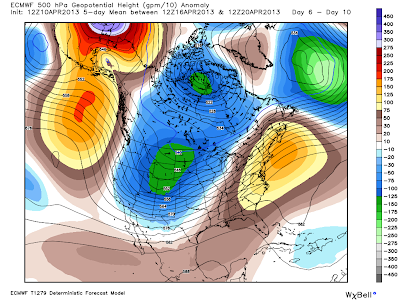 The overall pattern over the next 6 to 10 days is looking more and more like Old Man Winter isn't ready to let go, even though we're quickly pushing into mid-spring.

Shown above is the medium range height forecast across North America. In areas of cooler colors, low pressure is favored. In the same sense, warm colors indicate high pressure tendencies. Looking at the European model's forecast above, we see persistent low pressure pushing south from Canada into the Western US and Plains. In response to the low pressure in the West, high pressure is inclined to form in the Eastern US, and this trait is reflected nicely on the European model's above forecast. If the jet stream follows the low and high pressure waves, I would expect the jet stream to keep a relatively strong stance over the southern Rockies and southern Plains in response to the persistent low pressure anomalies in the area. When the jet stream approaches the high pressure area in the East US, it is expected the stream should make a quick move northeast through the Midwest and Great Lakes. This would put the last two regions in the temperature battle zones, and possibly in whatever severe weather risk may come along while this pattern is in place. 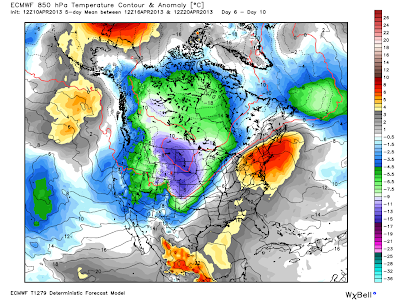 Lower level temperature anomalies for the same timeframe emphasize the cold weather deeply entrenched in the Rockies and Plains as a result of the low pressure pushing south from Canada. In the same sense, the high pressure anomalies in the East US result in above-average temperatures in the next 6-10 days. I expect the East US, mainly the Northeast and New England regions to get in on springlike temperatures, maybe even summerlike temperatures if the warm-up is strong enough. As for the Central Plains, that deep cold pocket from eastern Montana into the Dakotas, Nebraska and Kansas will return the Plains region into early springtime temperatures, possibly as chilly as late winter temperatures. The severity of both temperature anomalies is to be determined, but this pattern is certainly going to provide a chilly period for many people west of the Mississippi River.