It now appears that the stratosphere will kick off a number of indices that deem February to be the coldest prolonged period of winter thus far. In today's post, I will address multiple indices that favor a significantly colder than normal February.

Part I: The Stratosphere

In the opening days of January, we saw a stratospheric warming event occur. This event was minor, as the chart above (depicting temperature anomalies in the upper latitudes) shows. Nevertheless, this first warming event, coupled with the ongoing warming event is helping to destabilize the polar vortex in the stratosphere. So far this winter, the stratospheric polar vortex has been resistant to any and all attempts to be put down. We can attribute this to the positive phase of the Quasi-Biennial Oscillation (QBO), which is unfavorable for a weak polar vortex. These two first warmings are just tastes of what is to come. While the first warming was minor, it seems to have shaken up the vortex at least a bit, and this ongoing warming event right now is most likely helping with some slight (at the very least) destabilization of the polar vortex.

There looks to be a second stratospheric warming event in the making about 5 days away from today. The GFS model indicates we will see a spike in stratospheric temperature values on January 17th, centered in northern Russia. If we take a look at how this warming is angling itself at the polar vortex, so to say, it is clear that this is going to be a Wave 1 event. There are two major types of wave activity- Wave 1 and Wave 2. In Wave 1 activity scenarios, the stratosphere undergoes distress as a major ridge attempts to displace the polar vortex from the Arctic, while keeping it fully intact. With Wave 2 activity, the polar vortex is experiencing ridging across the upper latitudes, making the vortex want to split into two vortices. These vortices can then shift to lower latitudes and bring extreme cold weather to the regions affected. The Wave-1 activity is usually seen as the strongest stratospheric intrusion out of the two, as a significant push of ridging/warm air is made to displace the vortex. With a Wave 2 pattern, you have two areas of high pressure, making it relatively easier to break up the vortex. Considering we see the polar vortex (depicted here as the very cold air mass) being pushed off to one side, with a swath of warm temperatures to the west, it does appear that this would be a Wave-1 stratospheric intrusion. Interestingly enough, this warming is one of the trifecta of warmings that could ultimately significantly damage the polar vortex...

The ECMWF model system is in agreement on this Wave 1 activity, and we can see how it projects temperature and geopotential height values to spike in Wave 1 denotations, as seen in the dark blue lines on the first two panels from the top, and the dark red lines on the third and fourth panels from the top. The top image shows Wave 1 and Wave 2 forecasts for temperatures at the 10 millibar level, and the spike in the dark blue line there confirms what the GFS is already telling us about the chances of a Wave 1 intrusion. The same is true for the second panel, where we see geopotential height forecasts for Wave 1 and Wave 2 activity at the 10 millibar level. Again, the anomalously high Wave 1 values confirm the idea that this second stratospheric warming event would come as a result of strong Wave 1 activity. The same ideas are portrayed in 30 millibar projections of temperatures (third panel from top) and geopotential height values (fourth panel from top)- the consensus is that this would be a Wave 1 intrusion.

The long range GFS indicates that we will see a fourth, even stronger warming event in the closing days of January. We see the polar vortex has now reconsolidated itself from an elongated vortex to a more compact version. Despite this effort to regather itself, the polar vortex remains significantly displaced from its usual spot in the Arctic Circle. Based on temperature anomalies, it looks like this stratospheric warming event would be the strongest one so far in this series of warmings, though because this is just before the end of the GFS forecast time (forecast valid for roughly 16 days away), we can't really guarantee that this event will happen. However, if it did, there is a strong likelihood that it would be another crushing blow to an already-distressed stratospheric polar vortex.

This is the GFS Ensemble 500mb height anomaly forecast for January 18th over the Northern Hemisphere. We can see the highly meridional (wavy) jet stream, as is shown by the significant ridging and troughing over North America. The big story we will focus on here is the Bering Sea. If we look over towards the Bering Sea, we see a plethora of deep negative height anomalies, with the spaghetti charts on the right highlighting that body of water as being the epicenter of at least a decent-sized portion of the polar vortex. According to this forecast image, the Bering Sea would be encountering the polar vortex on January 18th. The reason I'm showing this is because of the Bering Sea Rule.The Bering Sea Rule states that by watching storm systems make their way across the Bering Sea, one can identify where and when a storm system will show up in the United States. The general timeframe is 17-21 days after a storm appears in the Bering Sea, a storm will appear in the United States. In this case, it looks like instead of watching for a storm, we might just have to watch for the polar vortex to enter the United States. If we extrapolate January 18th out 17-21 days, we arrive at a February 4-8 time frame. But that isn't all. The Bering Sea looks to be stormy from January 14th and onwards, meaning we could kick off February with some very cold weather- and stay that way. Time will tell, but this Bering Sea Rule signal is looking mighty cold for the US. 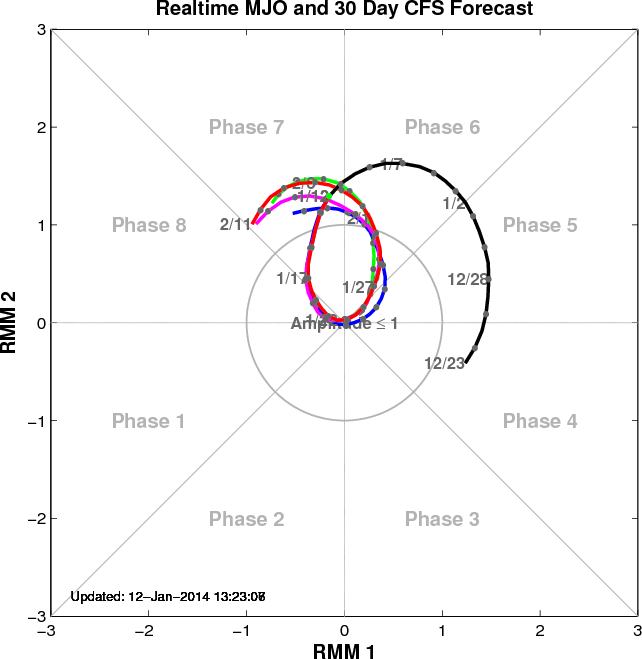 Long range Madden-Julian Oscillation forecasts from the University of Albany's Kyle MacRitchie call for the MJO to enter Phase 7 to kick off February. A common bit of knowledge for those familiar with the MJO is that the latter and early phases of this phase space (particularly phases 7, 8, 1 and 2) tend to favor more wintry weather over the central and eastern United States, whereas the middle phases aren't as supportive of snow and cold in those areas. This CFS Ensemble forecast image takes the MJO into Phase 7 for the first week or two of February, before it starts to swivel down into Phase 8. If the MJO can enter Phase 8 and stay there for the remainder of February, I can easily see the chances of significant cold weather in the US rising. 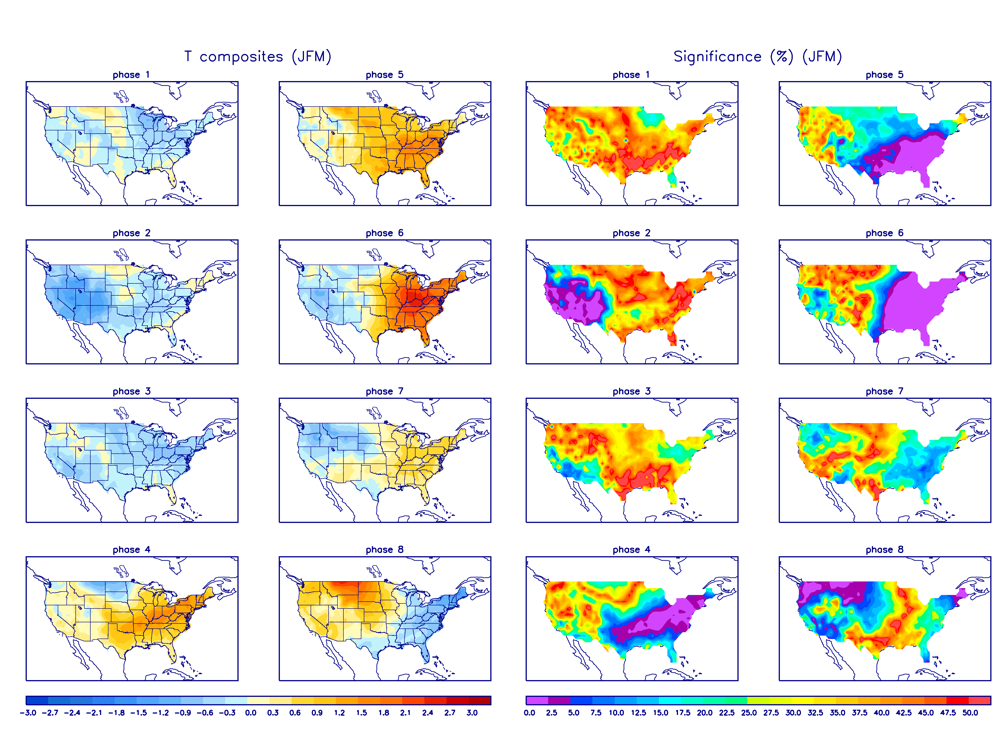 Temperature composites centered on February for each phase of the Madden-Julian Oscillation show how the big cool-downs start in Phase 8, and continue through Phase 3. While Phase 7 may look warm, I'm not that confident in the idea that the MJO would be able to overpower the other indices (i.e. PNA, NAO, etc) and create a warm environment. Regardless of just how the MJO plays out, it is apparent that we will see a shift towards those latter, wintry phases of the MJO. That should be enough to continue the early February cold through the month. The intensity may vary, but the idea of a cold February will most likely remain intact, especially after accounting for the stratosphere and the Bering Sea.

The second teleconnection to discuss is the atmospheric angular momentum index, or the AAM. 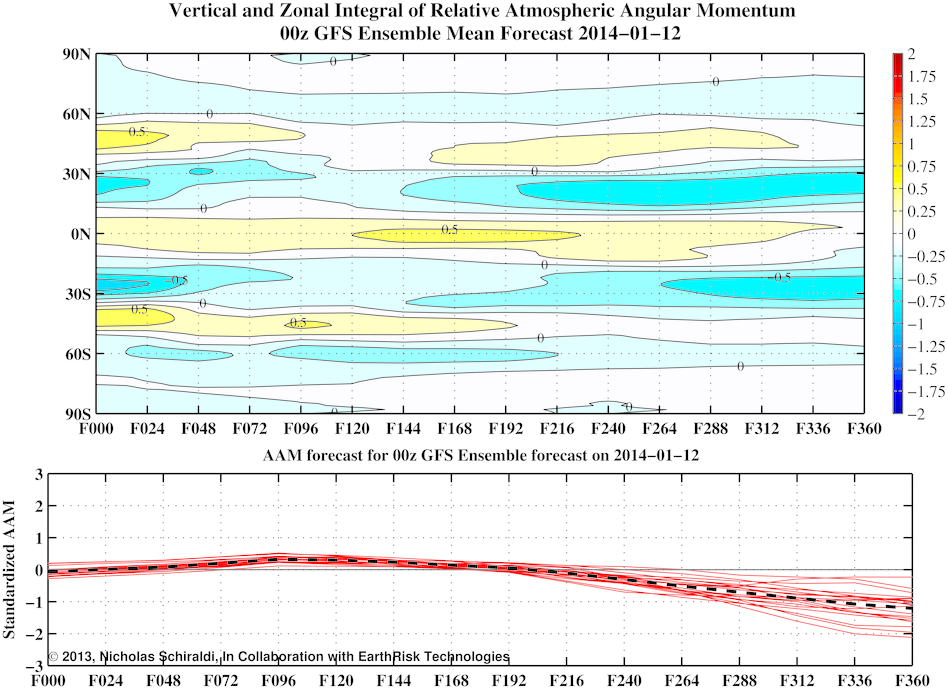 This AAM forecast, from Nicholas Schiraldi, shows the GFS projection of AAM anomalies on a time/latitude graph on the top panel, as well as an overall AAM anomaly forecast on the bottom panel. In the short and medium range we see a relatively neutral AAM, but towards the longer range, the GFS has been consistent in its idea that the AAM will be tanking well into negative territory as we approach February. If you were to take a look at the AAM phase space, the AAM is projected to hit Phase 1 before beginning to cycle through the low AAM phases, as you can see below. 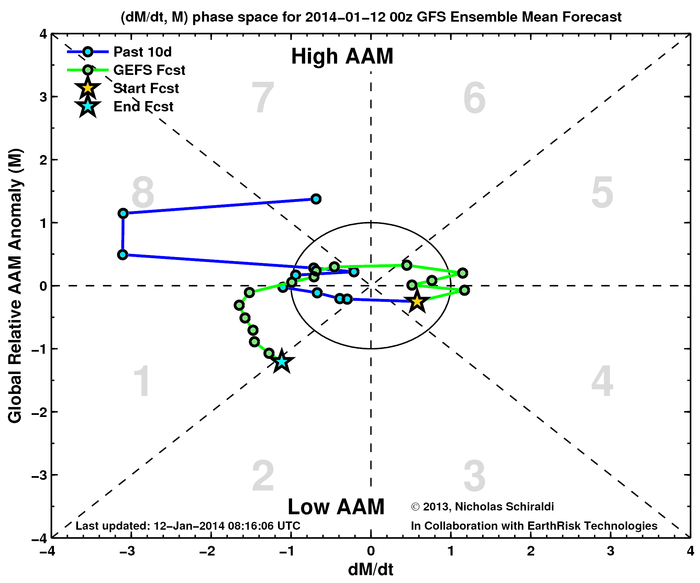 If the AAM does cycle through these early, low AAM phases, one could expect an anomalously cold February. The reason? I took the time to look up February mid-level geopotential height anomalies when accounting for the January AAM values. The result is below.

This map shows correlation values over the Northern Hemisphere. Basically, this chart was constructed by taking January AAM values and looking at the next month's (February) 500mb height anomalies. If the AAM in January was positive, one could expect high pressure in Canada and the Northern US because there are positive correlation values shown. In the same sense, if the AAM were positive in January, February 500mb anomalies would ne negative, due to the negative correlation shown in the Southern US. In our case, we look to average out in slightly negative AAM values for the month of January. If we look at the chart above, we could anticipate seeing unusually cold and stormy weather in the North US, because the positive correlation means a negative AAM produces negative height anomalies. It's even possible that the polar vortex would come down to Canada again, but it's way too far out to speculate about that. As far as the South, it's possible we see some high pressure due to the negative AAM showing a negative correlation there (that equals positive height anomalies: high pressure). I don't think we would see that significant of ridging in the South, mainly because the other parts of the pattern support much of the East being chilly, not just the Northeast. Regardless, this does bode well for cold weather prospects for February in the US.

I believe we will see February start out with brutally cold temperatures, as the Bering Sea argues. I have relatively high confidence in this cold really hitting the US hard to open February. Beyond the opening week of February, I anticipate we will see a continued cold pattern, but it will likely fluctuate. As any stratospheric influences begin to affect the US, we may or may not see enhanced cold weather- it will depend on the synoptic pattern around North America that will dictate where the core of the cold will go. Beyond mid-February, we should see the MJO enter Phase 8, which, if the forecast is correct, will allow for continued cold weather, specifically focused on the East US. Naturally, as time goes on my forecast confidence lowers, but the point is, there is definitely potential there for a very cold February.

Andrew
By Andrew at 2:11 PM 7 comments: Links to this post