There is now increasing potential for a major winter storm to occur over the East US. Let's jump right in.

Many of you know how I follow the Lezak Recurring Cycle (LRC), and track it every year to nail down who could get the best out of this winter. Well, thanks to the research of some fine folks at the AccuWeather Forums, it appears that this year's cycle will be 53 days. I tried to apply that timeframe to this potential storm system, and here's what I found. 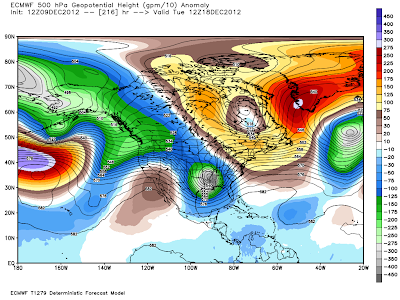 This is the 500mb geopotential height anomaly for December 18th over North America. As the legend indicates, cool colors depict below normal heights, while warmer colors describe above normal heights. The forecast shows a deep low pressure system in the South Plains and near the Gulf Coast. In response to this deep disturbance, a positive PNA is trying to form. As we know, a positive PNA favors a storm track through the Ohio Valley/Midwest. Notice the presence of an east-based negative NAO as well. While a negative NAO is favorable for cold and snow in the Northeast, an east-based negative NAO (the ridge is east of Greenland) can favor the Plains and Midwest for cold and storms.

Using the 53 day LRC timetable, I traced back December 18th to October 28th, and here is the 500mb pattern observed that day.

Look at that! We see a strong system in the Ohio Valley on this day, as well as a weak high pressure system in the Southwest indicating a possible positive PNA. There is a negative NAO in place, though we can't tell whether it is west or east based. Does this look familiar to the first image shown? You bet. It looks like our 53 day cycle is working. **For future reference, ignore Hurricane Sandy in these observation images.** 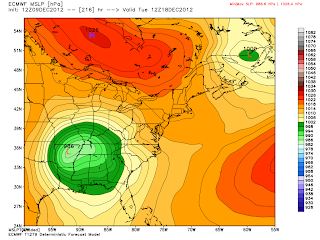 This is the sea level pressure (SLP) forecast for December 18th, and we can see a strong storm system emerging from the Plains at this time. This system is likely to move northeast in response to the previously-mentioned negative NAO, but not towards the coast, as a positive PNA interjects and may try to send this system into the Ohio Valley.

The models are having some trouble, so let's go a day ahead to October 29th and see what happened.

(Again, IGNORE SANDY.) Our storm system has now moved to the east, wobbling a bit as it did so, and combined with Sandy. Notice we still had our positive PNA showing itself with high pressure in the West US. If we were to follow this system and discount Sandy, I still believe an eastward movement would have prevailed, likely not as fast if Sandy were not present. The lack of Sandy in this potential storm system, combined with a positive PNA and east-based negative NAO leads me to believe that this forecast system should go a little more to the north and east than it did in October. 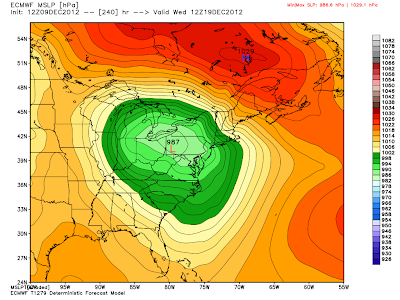 Now, we are on December 19th with the ECMWF forecast, and we see our storm system has indeed moved to the northeast in response to the PNA and NAO, and the LRC. The system's strength is now holding at a very nice 987 millibars, with tight isobars indicating strong winds are ongoing across New England and parts of the Ohio Valley and Midwest. Despite this, 850mb temperatures tell me rain would be the big story, but with a positive PNA, negative NAO and possible negative AO, that could very well change.

It does look like the ECMWF has a pretty darn good handle on this system, especially with such a good match-up with the LRC. I believe that this storm system will happen, the question is, who will get hit the worst?

Orlando
Temps: Slightly Below Average
Precip: Above Average
Snow: Average
By Andrew at 1:05 PM No comments:

Braselton
Temps: Below Normal
Precip: Above Normal
Snow: Slightly Above

McDonough
Temps: Below Normal
Precip: Above Normal
Snow: Slightly Above

Stockbridge
Temps: Below Normal
Precip: Above Normal
Snow: Slightly Above

Memphis
Precip: Above Average
Snow: Slightly Above Normal
Temp: Near Average
By Andrew at 12:30 PM 3 comments:

The storms should begin to ramp up around the evening hours tonight. The above image is simulated radar reflectivity, which means this is what you could see on the radar in coming hours. This is the forecast for 5:00 PM central time, and we can see some strong singular celled storms developing in Arkansas, west Tennessee, west Kentucky and southeast Missouri.
My concern is that a tornadic threat will develop with the cells in Arkansas, while a more linear structure will start the severe threat as wind and hail in Texas. While you can see that big, lone cell in southeast Texas, I doubt it will happen to a 'T'. 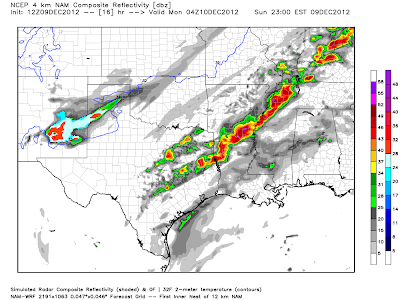 5 hours later, we now see that the severe weather threat has evolved into a wind and hail threat, as the storms are now linear. The strongest storms look to be in Tennessee, Arkansas and Kentucky, while Texas should be on the end of this severe weather potential.