This is the long range forecast published on November 19, 2015. 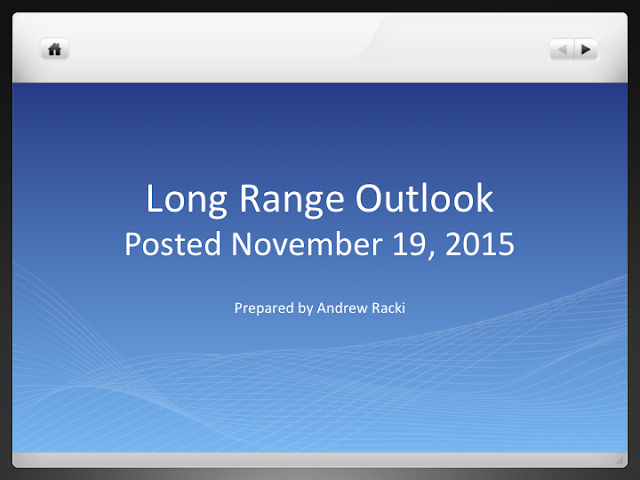 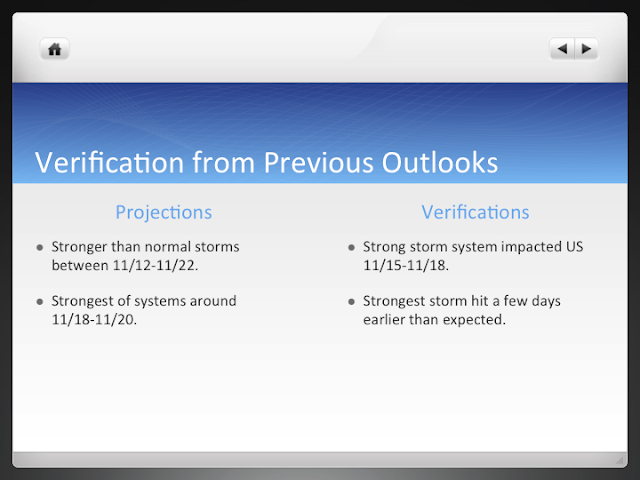 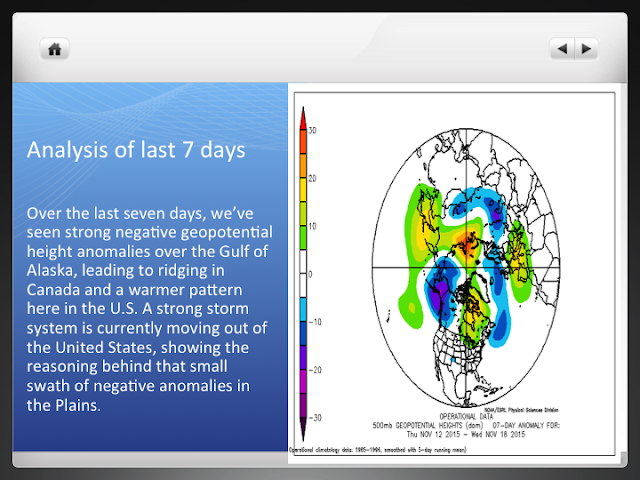 Over the last seven days, we’ve seen strong negative geopotential height anomalies over the Gulf of Alaska, leading to ridging in Canada and a warmer pattern here in the U.S. A strong storm system is currently moving out of the United States, showing the reasoning behind that small swath of negative anomalies in the Plains. 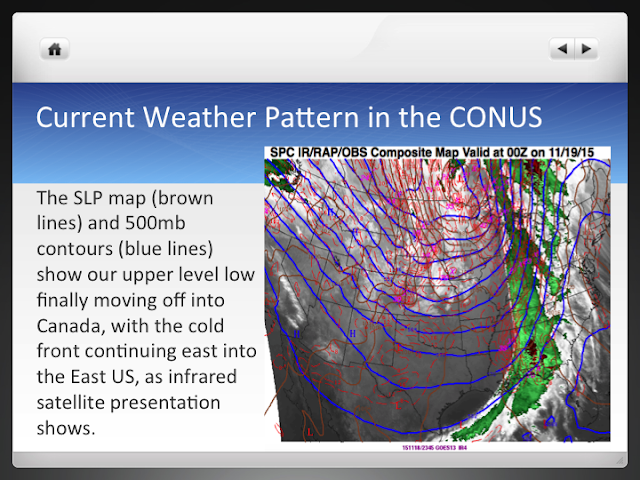 The SLP map (brown lines) and 500mb contours (blue lines) show our upper level low finally moving off into Canada, with the cold front continuing east into the East US, as infrared satellite presentation shows. 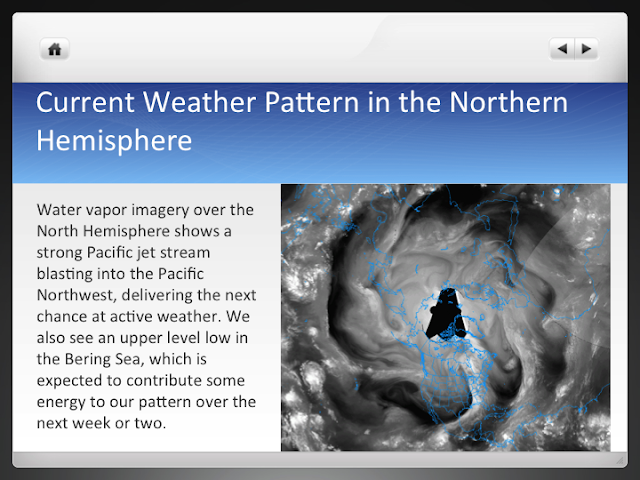 Water vapor imagery over the North Hemisphere shows a strong Pacific jet stream blasting into the Pacific Northwest, delivering the next chance at active weather. We also see an upper level low in the Bering Sea, which is expected to contribute some energy to our pattern over the next week or two. 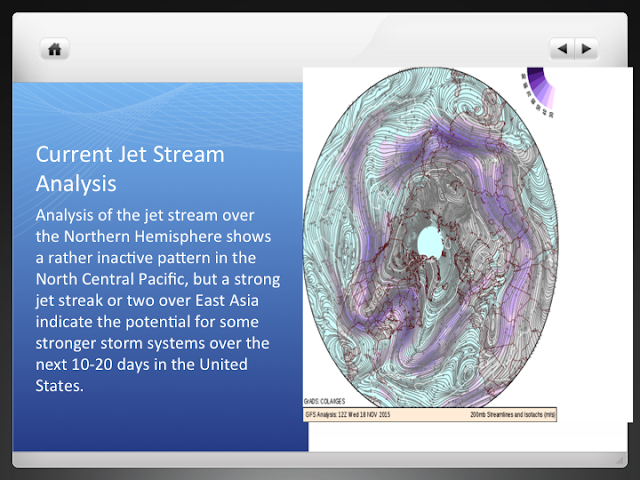 Analysis of the jet stream over the Northern Hemisphere shows a rather inactive pattern in the North Central Pacific, but a strong jet streak or two over East Asia indicate the potential for some stronger storm systems over the next 10-20 days in the United States. 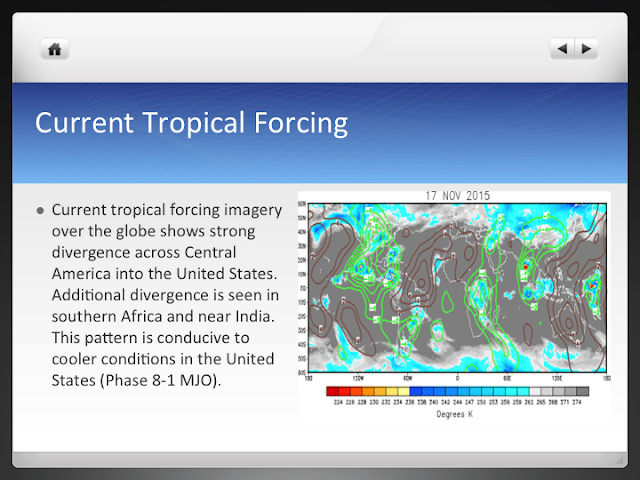 Current tropical forcing imagery over the globe shows strong divergence across Central America into the United States. Additional divergence is seen in southern Africa and near India. This pattern is conducive to cooler conditions in the United States (Phase 8-1 MJO). 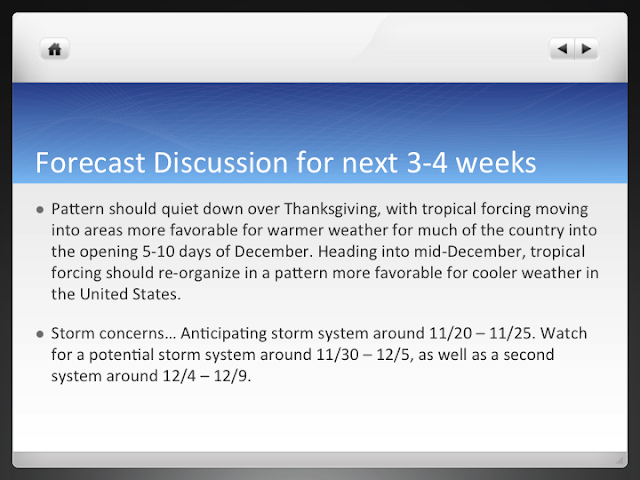 Pattern should quiet down over Thanksgiving, with tropical forcing moving into areas more favorable for warmer weather for much of the country into the opening 5-10 days of December. Heading into mid-December, tropical forcing should re-organize in a pattern more favorable for cooler weather in the United States.
Storm concerns… Anticipating storm system around 11/20 – 11/25. Watch for a potential storm system around 11/30 – 12/5, as well as a second system around 12/4 – 12/9. 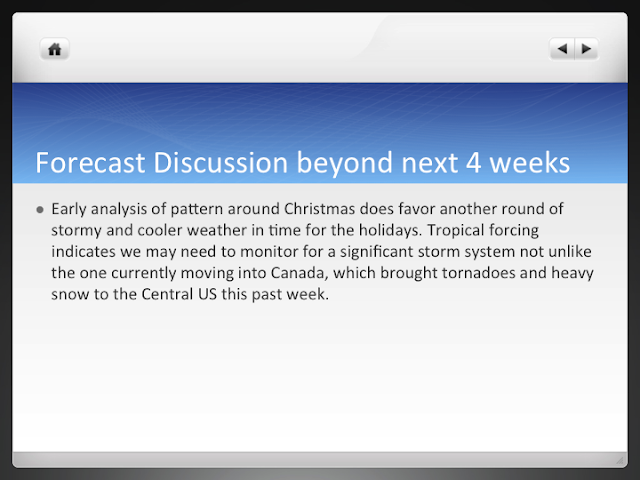 Early analysis of pattern around Christmas does favor another round of stormy and cooler weather in time for the holidays. Tropical forcing indicates we may need to monitor for a significant storm system not unlike the one currently moving into Canada, which brought tornadoes and heavy snow to the Central US this past week. 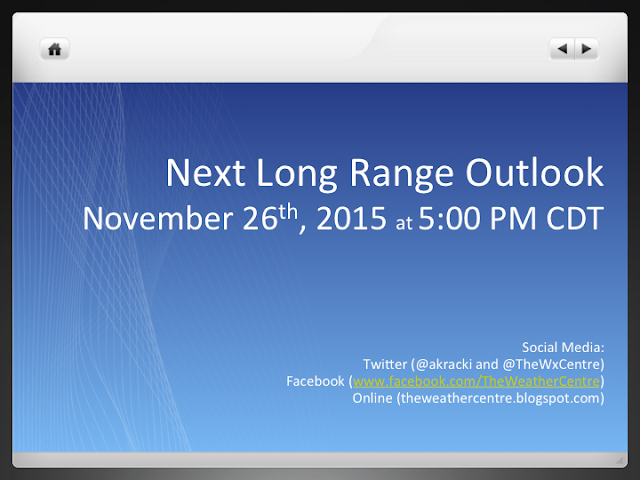 Model guidance continues to increase snowfall amounts in the winter storm expected to impact Friday through the weekend.

The latest GFS model has shifted snowfall amounts further to the north since we last analyzed the system yesterday. We now see forecasted totals in the 3-6" range across northern Nebraska into extreme southern South Dakota. Amounts in the 6-10" range are then forecasted in most of Iowa, with lesser amounts in the southern portion of the state. Amounts exceeding 12" are projected to hit southern Wisconsin, including Madison and Milwaukee. Northern Illinois experiences an intense gradient, with the city of Chicago receiving under 3" and areas along the Illinois-Wisconsin border receiving 12".

The latest NAM model takes a different approach to the storm. It drops 3-10" across southern South Dakota, with the lower end of the gradient in the western portion of the state and heavier amounts in the eastern part of the state. Northeast Nebraska is in line for 6-10" of snow according to this model, with a sharp gradient to the south of that heaviest snow axis. Iowa is projected to be slammed with snow across the board, with heaviest amounts in the western and northern portions of the state. Amounts then drop off as the storm moves into the Midwest. 6-8" amounts are forecasted to hit in a thin line along the Illinois-Wisconsin border, heading right into downtown Chicago, Illinois. Lesser amounts in the 3-6" range are then found in southern and central Michigan.

- A potentially significant winter storm is expected to impact the Plains, Midwest and Great Lakes Friday into Sunday.
- Considerable uncertainty still exists with respect to the track of this system.
- Amounts in excess of 6" are possible, especially in Iowa, southern Wisconsin, and northern Illinois.

There does appear to be at least a chance of a wintry storm system in the Thanksgiving timeframe.

The GFS model has a messy solution evolving for Thanksgiving Day, as the above image shows. We see two centers of low pressure, one on the Oklahoma/Colorado/Kansas border, and another on the South Dakota/North Dakota/Minnesota border. They are both about the same strength, with the southern one at 1004 millibars and the northern one at 1005 millibars. The graphic here shows widespread (albeit light) snowfall in Montana and North Dakota, with heavier snowfall in eastern North Dakota near the low pressure system.

In the warm sector, we see a line of rain and thunderstorms extending from southern Texas through Oklahoma, Missouri, and into Wisconsin and Minnesota. Going by this image, it's possible we see some stronger storms in the Texas and Oklahoma areas, into Arkansas as the day continues. Heavy rain would still be possible in the Midwest and Great Lakes, making for a soggy Turkey Day for locations such as Chicago, Milwaukee, St. Louis, and Little Rock.

The GEM model shows a singular storm system placed in southeast Oklahoma in the early morning hours of Friday, immediately after Thanksgiving. This would include heavy rain, and possibly thunderstorms, in Missouri, Arkansas, and along the Gulf Coast. Lighter rain would be anticipated in Iowa and Illinois, while a rain-to-mix solution could evolve for Kansas, Nebraska, and Iowa. A snow-mix situation would unfold across the Upper Midwest and North Plains. It's too early to talk accumulations, especially since there is no model agreement on strength, track, and precipitation.

- Model guidance is indicating the chance for a wintry storm system on Thanksgiving Day.
- Low confidence still exists in this situation.