THIS FORECAST IS OLD
CLICK HERE FOR THE NEW FORECAST
This is the update to the 2012-2013 Preliminary Winter Forecast. We will start off with an ENSO update and go from there.

An El Nino Watch was issued just over a week ago by the Climate Prediction Center, as seen in this post. An El Nino Watch is issued when conditions are at least 50% favorable for an El Nino to form in the 2nd half of 2012. As a recap, an El Nino is warming of ocean waters in the Pacific Equatorial region.

The next thing we can see indicating an El nino is something called Outgoing Longwave Radiation, or OLR. Basically, a negative OLR value means more thunderstorms, which signifies an El Nino, whereas a positive OLR index tells of less convection than normal, AKA a La Nina. Let's take a look at the last 5 months of OLR observation.

The OLR has been strongly positive in January and February, where we did have a solid La Nina. However, it is evident that this La Nina did weaken in March and April, and last month in May, we did have a very slight negative value on the OLR, which tells me that the La Nina is officially over, and we are beginning to wane into a potential El Nino situation for the 2nd half of the year and into 2013.

The sun will be a player in this winter, and this sunspot cycle will be abnormally low. The maximum number of sunspots will occur next year, and it will be just around 60- much lower than the 110-something sunspots in 2000. This will be a more interesting around 2020, when the number of sunspots stands at around 0. However, there will likely be some small effect on temperatures, and it should be a little lower than what it would be at normal sunspot level. Let's look at this new solar cycle 24 in comparison to previous cycles.

The graphic above shows the current solar cycle in violet compared to the previous few cycles. Cycles 21 and 22 were fairly normal and very similar, but Cycle 23, in red, came out weaker than the previous two cycles. And now, since 2008, Cycle 24 has been the weakest of all, exhibiting a trend that the sun is indeed cooling down. I expect that this lower than normal cycle will probably not affect our upcoming winter that much, but in the next several years, a cooler than normal trend should be observed.

Something I really want to share with you is the relation of the Pacific Decadal Oscillation to this winter. 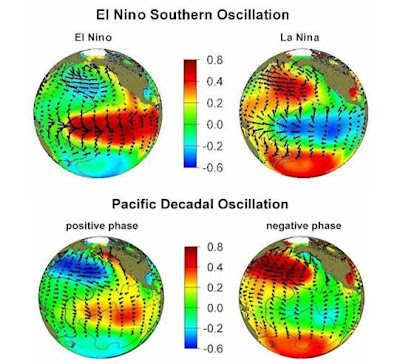 In the image above, you can see the PDO and ENSO effects on the Pacific ocean. A Positive PDO induces cooler than normal waters across the area to the southwest of Alaska, with warm waters in the Gulf of Alaska and in the ENSO area, suggesting that a +PDO and El Nino may have a slight correlation. The same potential correlation happens with a La Nina and -PDO, with warm waters in the areas southwest of Alaska and somewhat cooler waters in the ENSO areas. That said, let's look at the PDO forecast I posted a little while back from the ESRL's LIM PDO model forecast, which I am unable to like to due to technical difficulties at the ESRL.

The PDO is forecasted by the ESRL to stay strongly negative going into the next year. This does appear to be likely, as we are currently in a negative phase at the time of writing (source). Considering that we are in and will be staying in a negative PDO, it can be expected that a generally warmer body of water than usual will be sitting in the areas off the Asian coast.

I decided to put in another set of analogues, but this time trying to pinpoint the scenarios that may happen for us. I used years with El Ninos and Negative PDO values (source 1) (source 2).

Temperatures in these years were pretty warm in the western half of the US, including the Rocky Mountains. Near-average temperatures were observed in the eastern US, with cooler than normal temperatures in the Northern Plains. As for precipitation, values were pretty much average across the nation, with above average precipitation in the Northwest. By the way, I did compare observed drought values for these years (source) compared to May 2012 (source), and they correlated very nicely, indicating that these years do indeed have a correlation with this situation. Again, this is just an observation into what could happen with an El Nino and negative PDO.

Now we get into the analogues that I am using to make a much better determination of this winter's potential.
Now, let's check out years that followed two La Ninas in a row. The years I used were:
•1963
•1972
•1976
•1986
•1997
•2009
It should be noted that while some of these years could be called neutral, I was looking to see if they were still in negative territory and it seemed that the two years in question remained connected by the same La Nina event, by one way or another.


This result turned out substantially different than the previous images. We now have a cool eastern half of the US, with only a bit cooler temperatures in the Northern Plains than the previous 2 images. Precipitation remains roughly the same, with a wet Southeast and dry Ohio Valley and Northwest regions.
Let's discuss analogues in specific. 1976 is a good one, in my eyes, because I compared charts for Chicago, Illinois, from this year and 1976, and found both years to have well above average late winters and springs. Towards fall and winter of 1976-77, the temperature sharply dropped and averaged below normal for those seasons.
1986 was a little less on the ball. 1986 involved temperature swings that seemed to equal themselves out, with no defined above average phase or below average phase. However, there are some sharp spikes in Chicago temperatures from 1986 in the first half of the year, and that could correlate with the upcoming winter.
2009 was a curveball. There were small phases of above normal temperatures, and small phases of below normal temperatures throughout the year in Chicago. The first half of the year involved a mainly below normal temperature phase, but the first few months eventually brought a nice, warm temperature swing. This analogue could be a fair one.
1963 had a fairly similar situation as 1976, but 1963 began cool and stayed warm throughout the year before completely tanking in the last month or so of the year. They both follow a cool-down in the last part of the year, but 1963 began a little too cool for my complete satisfaction.
It should be noted that the 1950-1980 timeframe involved a negative PDO, whereas the 1980s were in a warm PDO. That said, I think I will discount it. 2009 was a pretty neutral PDO, on its way to a negative phase, where we are now, so I want to keep it in the game.
As if this wasn't long enough, let's make up one final analogue set using 1976-77, 2009-10, and 1963-64.


Temperature anomalies changed dramatically with this, and it shows that the eastern half of the US, as well as the Northern Plains, are now on the cooler side of things. Precipitation didn't change too much, so temperature is the real big thing now.

Something else I am watching is an index called the Quasi Biennial Oscillation, or QBO. It involves wind patterns in the stratosphere. When the QBO is negative, winds are going in a westward direction. A positive QBO leads to winds going in an eastward direction. Now, last winter there was a lot of hype over sudden stratospheric warmings, or SSW's. An SSW happens when the QBO quickly changes from positive to negative, leading to intense and sudden warming.
Now, I decided to look around and see if I could find a relationship between the QBO and equatorial convection. I did find an interesting article, and I was able to determine from the information provided that tropical convection is deeper, or stronger, in the Negative QBO than in the Positive QBO. That said, it would be logical to find a negative QBO in an El Nino situation, due to the fact that El Ninos are characterized by abnormally high levels of convection. This is also logical, as a negative QBO contributes to a Negative NAO, which in turn combines with the El Nino to produce intense Northeast snowstorms.

I also found a correlation between Outgoing Longwave Radiation (OLR) and the Quasi-Biennial Oscillation (QBO). When there is enhanced convection in the equatorial region, the OLR becomes negative. That said, a negative OLR is more tilted to be indicative of an El Nino. Deep convection is characterized by a low OLR, as stated earlier. If the Negative QBO supports deeper convection, then it would only make sense that both the QBO and OLR have a relationship with each other and the ENSO pattern. However, not all of these will definitely happen, but they do have an increased likelihood of happening in correlation with each other.
Right now, we are in a neutral ENSO situation that appears to be heading towards an El Nino, and this has been reflected by a very weak negative OLR anomaly. However, the QBO has recently been tanking to very low levels in recent months. I find that this is not a surprise, as I showed above the upwelling of warmer waters in the ENSO region. Since the QBO is negative, I would expect at least one ENSO region to be in an El Nino state of warmer than normal waters. To be quite honest, I have a feeling that the eastern ENSO areas could pass off having an El Nino right now. If the QBO is negative, I would expect the OLR to become negative soon, as warmer waters at the surface increase convection, keeping the QBO and OLR in negative territory.

Keep in mind that just because the QBO and/or OLR are negative, an El Nino is not guaranteed to form. It is just in the favor that these align with an El Nino. 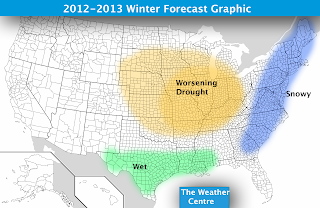 -Weak to Moderate El Nino will be here for winter.
-Cool temperatures have the potential to take the eastern US by storm this winter.
-Precipitation could be on the below normal side in the Ohio Valley, but that is not for sure just yet. A weak El Nino can bring above average precipitation to the eastern US, while a stronger Nino does not.
-Considering we may be heading into an El Nino, I am liking the idea that the South US and East Coast will get above normal precipitation. Yes, that means more snow for the East Coast.
-Cold shots ought to reach across much of the Eastern US, so some crops in the Southeast may be at risk.

Thank you so much for reading.
Andrew
By Andrew at 12:00 PM 31 comments: Links to this post