Potential Storm for the Midwest and Great Lakes 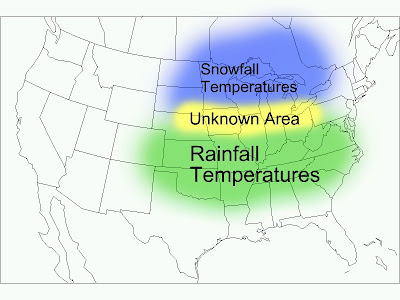 Basically, areas north of Madison Wisconsin should be able to let all snow fall.
Areas south of the Missouri border should experience rain all the time. Anyone in between those borders are in the potential for anything from rain to freezing rain to sleet to snow.
By Andrew at 5:23 PM No comments:

DGEX 18z: The DGEX moved farther south in line with the old ECMWF.
ECMWF 12z: The new ECMWF moved farther south in a new path and is weaker.
GFS 18z: The GFS has given in to the OLD ECMWF but not the new one. The GFS is farther south.
GFS Ensembles 12z: The GFS ensembles aren't really in accordance or a general consensus. However, better info will be available with the 18z ensembles.
NOGAPS: 12z: The NOGAPS fell in line with the NEW ECMWF.
CMC (GEM) 12z: The GEM is the farthest north on the Wisconsin/Illinois border line.
By Andrew at 4:33 PM No comments:

Are you an aspiring weatherman for the NWS?

Potential for Midwest Winter Storm as the Big Thaw's end is in Sight.

The Big Thaw is expected to wane down into next week, with temperatures skimming down to the 30's once again in the Midwest.
With that cooldown comes the chance for a storm.
Several, actually.
The first one is what we will concentrate on right now.
MODEL REPORTS
ECMWF- .57 QPF, all snow for Chicago. ECMWF is currently listed as SOUTH in the way of storm tracks.
GFS- The GFS is currently listed as NORTH.
NOGAPS- The NOGAPS is having a SOUTH track.
CMC (GEM)- The CMC appears to be aiming for a north track but the thickness line isn't nearly as far up as it was with the GFS. The CMC is currently an UNDETERMINED track.
DGEX- The DGEX is taking a NORTH track.
GFS Ensemble- 3/12 show the storm taking a direct hit NORTH. However, 9/12 show the storm impacting North Illinois hard as well. UNDETERMINED.
CONSENSUS- North track is favorable ATTM, but ECMWF may easily change that.
By Andrew at 6:30 AM No comments: