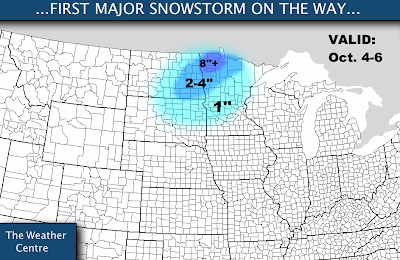 The first major winter storm of the 2012-2013 season is coming in, with over 8 inches of snow likely in the next 3 days.

I am expecting a storm system to move into the region in the next 24 hours, with the event beginning as rain and transitioning to snow. This initial phase will drop 2-4 inches across North Dakota, with 1 inch or less expected farther to the south.
However, a sudden rain-to-snow change will occur in northern Minnesota and extreme northeast North Dakota, bringing over 8 inches of snow to the mentioned areas. Some spotty blizzard conditions are possible, especially in rural areas.

Heavier snow is expected in Canada, upwards of 18 inches in some spots.

This is an analysis image of what was observed on September 22, 2012. This chart shows 500mb height anomalies across North America and the East Pacific. As you can see, a deep disturbance was present in the Great Lakes region, with a strong ridge in northwestern North America. Look familiar? It should feel familiar, as this disturbance brought many North US folks the first good cold shot as a result of this synoptic-scale pattern. It even brought some snow to the Upper Midwest. It was a total shock to many folks, who usually see their first freeze well into October. Snow fell several weeks before it should.

What we have been seeing no longer appears to be an anomaly. Cold across the board and snow in the Upper Midwest may actually be the norm if what I'm about to show you verifies. 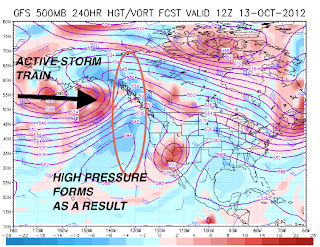 This is the 240 hour forecast for the latest GFS model. I have outlined two areas of interest- the first is an arrow pointing east, denoting an active storm track. This is not something new- we have been seeing this active North Pacific storm track for quite a while now, and it is these systems that have produced the cold in the North.

Also, take note of the circled area of blues out ahead of the storm systems. It is known that before a storm system moves east into the West Coast of North America, a ridge can form out ahead and force the storm to change its path. Again, this has happened several times in the past few weeks. If this ridge holds, the storms will shoot north and dive south into the Great Lakes, sending cold and snow into the region, like we have seen earlier.

My point is, the cold is going to stick around in the next several days before a possible steady warm up occurs through much of the nation. However, this has yet to be examined and must be analyzed further to confirm this suspicion.

Andrew
By Andrew at 4:02 PM No comments: Links to this post

For the second week, the update of sea surface temperature anomalies is indicating that there is no discernable body of warm water in the Equatorial Pacific, thereby bringing the El Nino to a stagnant stage in my eyes.

In a stunning turn of events, the El Nino disappeared from the charts last week. I did think that this was only temporary, and that the next update could bring back the El Nino warm water anomalies. However, after the most recent update, it is apparant to me that this is an actual issue, and that the El Nino may be starting its painfully slow demise.

A regional breakdown of SST anomalies across the Equatorial Pacific shows the sudden disappearance of the El Nino is confirmed, with a sudden drop-off in warm water anomalies depicted in Nino regions 3 and 3.4. These two regions are typically classified as the central ENSO regions, meaning that the supposed El Nino dissipated in its central stage.

You may notice warming in Nino region 4. Beware, Region 4 is notorious for giving false warmings and cooling that may be nothing more than simple warming. If you want to see the El Nino, watch for warming in at least Region 3.4 and do not rely on Region 4- that solution does not end well.

Andrew
By Andrew at 3:47 PM 5 comments: Links to this post